This was a very good post from thuletide on Gab. 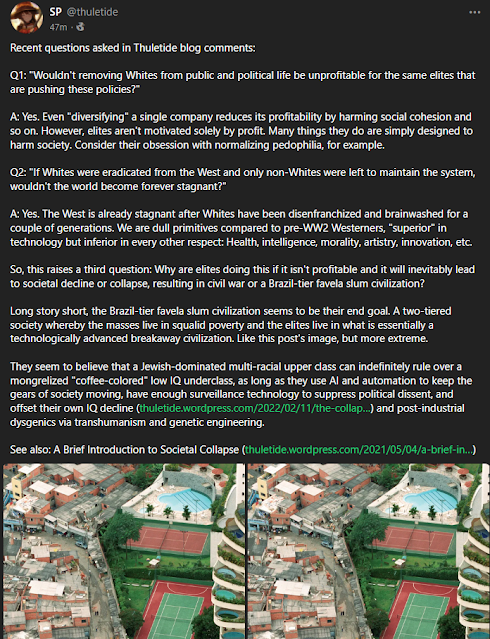 This ties in nicely with my post What Would It Look Like?, pondering life under a neo-Bolshevik victory. The picture is especially powerful, an incredibly posh home surrounded by slums. This is their future, an elite few living in opulence while the rest of us languish in poverty and deprivation. It is similar to life in the former Soviet Union where party elites lived like royalty and the noble workers stood in line all day for a stale loaf of bread.
This is applicable to the silly "Get woke, go broke" Boomer nonsense. Hollywood has been far more concerned with propaganda and The Message for decades than it has been with making lots of money. They can always roll out some awful Marvel movie and rake in a few hundred million from White guys to subsidize making leftist agitprop films.
However it looks in practice, the goal is what I have been talking about: a dominant, small minority ruling over the rest of humanity with a slightly larger mandarin class acting as administrators.
If you are reading this your fate under the new regime looks more like the favela slums in the picture above. Those are the stakes we face.
Posted by Arthur Sido at 10:03 AM