The Squeeze Is Coming

Your daily reminder that White middle class people are Public Enemy Number One. 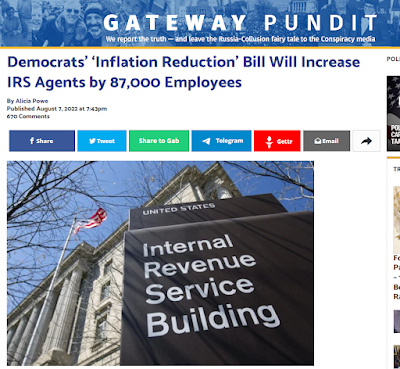 Riddle me this Batman, how does hiring 80,000 highly compensated Federal employees reduce inflation?
Also worth noting: 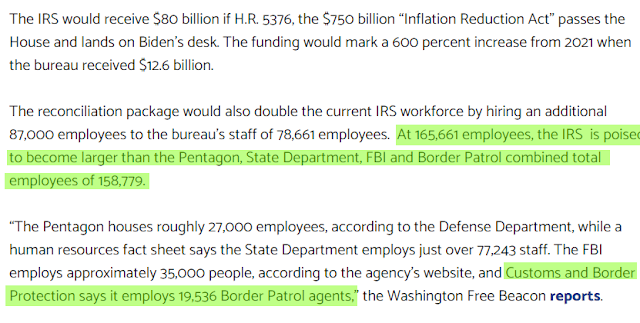 With 165,000 employees, the IRS will have as many staff as some of the largest private employers in the country and 8 times as many employees as the Border Patrol has agents.
What are all of these IRS agents going to do? If you believe they will go after big corporations and the "top 1%", then you are a fucking moron. They are going to make life miserable for middle class Americans and small business owners who are generally not making enough to warrant being harassed over their tax filings but when you have an extra 80,000 IRS agents looking for something to do? You can bet the number of audits is going to skyrocket, even for regular tax-payers who don't normally give the IRS any reason to pay much attention to their filings. I expect it will be even worse for small businesses who already have to deal with the Byzantine tax rules and now are likely to be endlessly harassed by the IRS.....
80% of new IRS revenue will come from small businesses earning under $200K: tax experts
“The approach here is to double the IRS workforce, take the leash off, and see how much they can collect,” (Joe) Hinchman adds. “I think they’ll collect it but it will be quite painful.”
Small business owners making under $200,000, a category that includes me, don't have enough revenue to hire accountants and most of us do our own taxes but now we are targeted for extra scrutiny on top of the extra burden of higher fuel prices and other inflation squeezing our profits. It almost seems like they don't want people running small businesses and instead favor large corporations that can pay for lobbyists and tax lawyers, and of course buying politicians. Almost....
Meanwhile the always pleasant and cheerful folks at the IRS are apparently getting geared up for some reason: 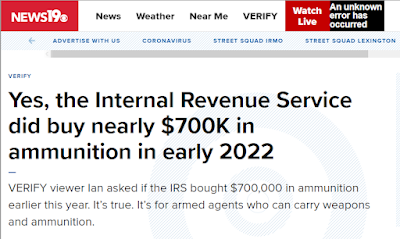 That $700,000 in ammo came in just three months and went to the IRS Criminal Investigation (IRS-CI) division that has over 2,000 armed agents. Why does the IRS have 2,000 armed agents? Gee I wonder....
Some Republicans in Congress like Matt Gaetz and Marjorie Taylor-Greene are sounding the alarm about the expanded and apparently heavily armed IRS but it is too little, too late.
With 8 times as many IRS employees as Border Patrol agents, it is pretty clear who the Federal government considers a threat: you and your family, not illegal aliens, human traffickers and drug smugglers. The IRS is going to be coming after normal American tax-payers with endless reams of paper and backed up by thousands of armed agents while leaving our borders wide open and undefended.
This is not how a functional society is supposed to work.
Posted by Arthur Sido at 12:34 PM