The Puzzle Pieces Keep Coming Together

People in the ruling class are different. They don't think like the rest of the country and this is largely because they don't consume the same media. If you live in Coruscant Washington D.C. and don't know what is in the latest Washington Post, you are considered a Philistine. Most elites read the New York Times as well. People in the rest of the country? They read mostly their local news and get their national news from the TV, other than the pretentious liberals in small towns in the Midwest who want to signal their intellectual superiority over the unwashed masses.
One of those media outlets is The National Interest, a magazine founded by Irving Kristol, father of loathsome warmonger neocon Bill Kristol. Irving was the "godfather of neoconservatism", which is not conservatism in any recognizable sense and is also the antithesis of what MAGA "America First" nationalistic populism was supposed to be all about. Of course MAGA was co-opted almost immediately and "America First" became a distant memory.
The National Interest is a mouthpiece for the military-industrial complex featuring recent articles with titles like this:
Are 12 Navy Aircraft Carriers Enough to Stop a Rising China?
It doesn't answer the question but the answer is pretty clear: no, 12 is not enough. Way back in 2010 (!) on one of my old blogs I pointed out that at the time the U.S. had more than twice as many aircraft carriers as the rest of the world combined and half of those were in allied navies (See: The most sacred of conservative sacred cows obviously a lot has changed politically for me in the last dozen years). A different recent article at The National Interest caught my eye:

Want to Solve America’s Recruiting Crisis? Recruit Foreigners
That isn't a joke. It is written by a fella named Arshan Barzani and if you think he doesn't sound like a Swede, you would be correct.
A start would be to recruit in the Philippines, where President Ferdinand Marcos Jr. wants to bolster defense ties with the United States. There are 115,000,000 Filipinos, most are under twenty-five, and many would race to enlist as their ancestors did.
Programs in other Pacific states should follow. What the likes of Tonga, Kiribati, and Papua New Guinea lack in population, they make up for in strategic value. Eager to leave their islands and provide for their families, locals would eagerly join up. That is why eligible Pacific islanders already enlist at record rates. The Army’s recruiting station in American Samoa (population 49,710) outperforms all others. In Palau, one of three countries whose compacts of free association with America allow their citizens to enlist, rates of service are higher than in any state or territory.
Ah yes, the super high tech U.S. military of the 21st century serving as the world's policeman indefinitely by fielding armies of young men from Kiribati and Papua New Guinea! Kiribati has a population of around 119,000 so I am certain that they would jump at the chance to feed their young men into a military meatgrinder fighting China or Russia. Given the increasing technological demands of U.S. weapons systems, even the new Sig Sauer XM5 rifle that is replacing the M4 is topped with a Vortex XM157 NGSW-FC that looks like you need a PhD to operate it, simple low IQ grunts from backward countries probably aren't ideal candidates. This isn't like shoving an M1 into the hands of a Filipino and sending them off to charge a Jap machine gun nest, the new military is reliant on high tech gadgets. I am sure the average Tongan dude can figure them out.
The bigger issue is the idea of arming tens or hundreds of thousands of foreign mercenaries and putting them in U.S. uniforms. This is hardly an innocent way to bolster the ranks of the military.
It is without question that the U.S. military, at least for now, would be largely hesitant to open fire on American citizens (not without exception, see Kent State for an example). Billy Joe Bob from Arkansas isn't likely to gun down fellow rednecks just because he is told to do so, and might be more likely to cap an officer who ordered him to. But Fatahoeey Fukayomama from Tonga? He probably wouldn't mind.
The Left has been remaking the military and law enforcement into a more easily manipulated force to carry out their dictates by driving out the people who once were the backbone of both, namely young and conservative White men, and replacing them with degenerates and non-Whites who have grown up being force-fed a steady diet of anti-White resentment and hatred. At the same time the upper ranks of both law enforcement and the military are being packed with more non-Whites and woke Whites who hate their fellow heritage Americans. As I pointed out before (see: Coming Apart Piece By Piece), we already have a ton of diversity hires running the police in America's top ten largest cities:
Searching quickly through the ranks of chiefs of police departments of the largest cities in America and you see a lot of people that look like Rodney Bryant. Chicago PD is led by a black guy. New York's police commissioner is a black woman named Keechant L. Sewell. L.A. is led by a White guy but Houston is led by Troy Finner, a black fella. Phoenix? Jeri Williams a black wahmen. Philadelphia also a black woman, Danielle M. Outlaw. San Antonio is led by a White dude as is San Diego. The chief in Dallas is a mestizo as is San Jose. By my math that is two black men, three black women, 3 White men and two mestizo men leading the police departments of the ten largest cities in America. I suspect if I kept searching I would find a similar pattern in most large cities.
Do you think these five black and two mestizo chiefs view White people differently than an Irish Catholic top cop in the 1950s? You betcha.
Those trained and armed non-White foreign mercenaries might start off fighting wars for Israel, er defending freedom, overseas at first but how long would it take before they started being stationed right here in America? What could possibly go wrong bringing hordes of guys from Papua New Guinea and giving them the run of the place in America?
Perhaps it is just my xenophobia and racism talking but it certainly seems like there is a concerted effort to transform what were once White, conservative institutions into armed thugs who will cheerfully open fire on American citizens.
All I know is this: I don't care what uniform you are wearing, an armed foreign soldier on U.S. territory is an invader and should be treated like we have traditionally treated foreign mercenaries like the Hessians. 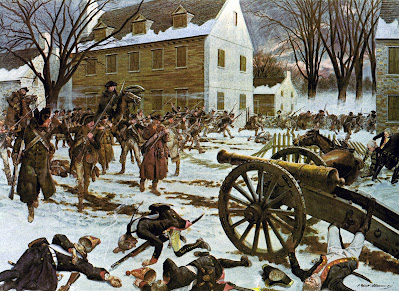 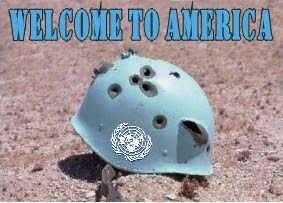