Something In The Water In The Buckeye State?

This caught my eye:
Ohio bill could provide more resources for kids with disabilities to succeed
"More resources" is code for "a lot more money". Why do Ohio schools need more money you ask? This is why... 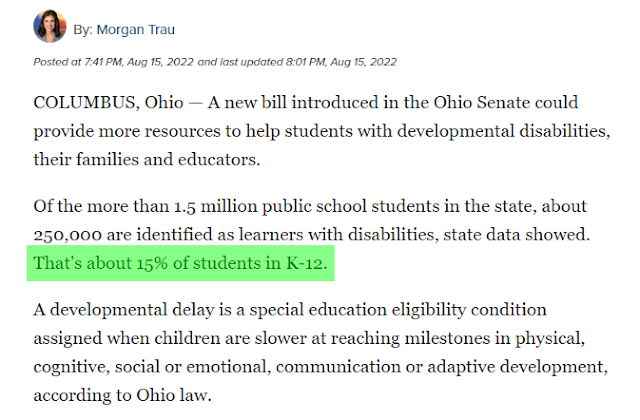 WTF, 15% of students in Ohio public schools have a "developmental delay"?
Way back when I was in public school in Ohio, "disabled" or "special needs" or "handicapped" students were generally what you would expect: retarded kids, blind/deaf kids, that sort of thing. These were kids who were clearly messed up or had some really significant handicap but there were only a handful of them. Now you are telling me that more than one out of every seven kids in Ohio is "developmentally delayed"? This despite the public education machine getting whatever it wants in Ohio and across the country?
What is going on here?
Part of it is the rise of kids on the autism spectrum and there are a whole lot of these kids. Despite (?) the advances in medicine and especially prenatal and pediatric care, more and more kids end up being significantly autistic just as it seems that the percentage of kids with serious allergies has exploded. There is something going on here that is messing up kids from an early age.
But the bigger culprit is found in the definition of a "developmental delay". I have it on good authority that many of these "special needs" kids fall into this category:
"...slower at reaching milestones in...social or emotional...development"
In plain English, kids who exhibit significant behavioral problems. When a kid consistently is acting out in class, instead of getting paddled or suspended, now they get called "special needs" and are given special treatment and extra resources. Many of these kids are violent and borderline psychopaths because if we know anything about kids, we know this: if you fail to discourage and indeed actively reward poor behavior in kids, what you get is a whole lot more of that poor behavior.
Being a semi-famous internet racist I will also point out that Ohio public schools are, as is the case in most of America, slowly turning into pre-penitentiary holding pens and daycare for indigent parents. Look at this, and this is pre-pandemic: 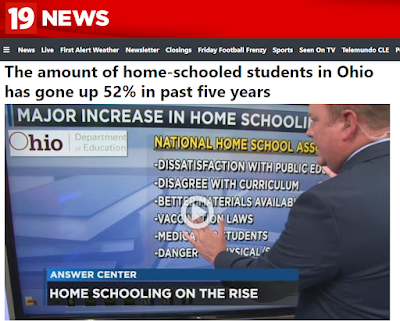 A later story from 2021 shows the trend continuing in Ohio:
According to data from the Ohio Department of Education, traditional homeschooling is gaining popularity. Preliminary data shows homeschooling grew by 25% between the fall of 2019 and the fall of 2020.
The trend is also picking up steam nationwide.
Research from the National Home Education Research Institute shows in March this year there were almost five million kids in grades K-12 who were being taught at home. In the spring of 2019, there were only two and a half million.
Parents realized that if teachers can educate kids with slapped together lessons via Zoom, they can do at least as well.
Many parents have pulled their kids because public schools are dangerous, from budding young criminals to child molesting teachers and have elected to homeschool. Millions more send their kids to private schools.
Then there are demographic changes. Ohio is like the rest of the country, becoming less White and more black and brown. This means kids that are less intelligent on average with more behavior problems. Hence, more kids who cannot handle being in a classroom setting without falling behind and/or being disruptive. You can't get rid of them so you label them "developmentally delayed" and coddle them in the hopes they don't kill a staff member or student before they "graduate".
What kind of country are we heading toward where 15% of public school kids have significant behavior problems, can't function in a classroom or are too dumb to handle the ridiculously easy public school curriculum? A country that is dumber, less innovative and more violent.
Basic, normal human beings are going to be in short supply in just a few years. Better plan now for how you will survive and function in that sort of country.
Posted by Arthur Sido at 8:31 PM