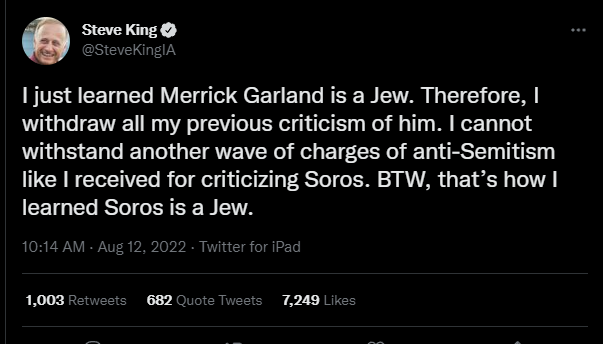 King was the last mildly, openly pro-White political figure in the GOP and he was run out of office by his own party to appease the racialist woke crowd that wouldn't have voted for any Republican. The former Congressman now mostly seems to spend time on Twitter, I can't believe he hasn't been suspended yet. The replies to his tweet are delightful sputtering outrage.
Then a quick shot at "conservatives"

I came to the realization a long time ago that Leftists weren't our most dangerous adversary, it was instead the traitorous grifters in the GOP that did more to thwart our agenda. When Trump was first in office with both chambers of Congress it wasn't Chuck and Nancy stopping him, it was his own party.
Then there is this

@KendrickPerkins this is it. The video smh. pic.twitter.com/CnF379Omkb

The alleged shooter is one Yaqub Salik Talib and apparently he shot this coach, Michael Hickmon, because Talib was mad about something. Hickmon looks like a big dude so of course instead of fighting like men when the kids weren't around, Talib shot him. That is what normal people do. Talib is the brother of former NFL player, five time Pro-Bowler Aqib Talib. Aqib and Yaqub apparently are also coaches in this same youth league and I am sure the example Yaqub set here will be a powerful lesson for these kids.
Speaking of the dark hued kangz, here is some real life Grand Theft Auto shit.

Dash cam footage of hit and run in the Jackson Park Highlands neighborhood of Chicago that occurred at about 5 a.m this morning
pic.twitter.com/X4L9EXQo2C

That's one way to break up a street brawl.
Life in the cesspool known as Twitter!
Posted by Arthur Sido at 9:29 AM