Not Just In Ohio

In the spirit of fairness after my post Something In The Water In The Buckeye State?, we got some similar news here in the Hoosier state about our disastrous public "education" system.

Why the urgency? Cuz the kids in Indiana can't read apparently.
Last week, the state released the most recent IREAD-3 results that showed nearly one in five third-grade students – or more than 14,000 Hoosier students — have not mastered foundational reading skills needed by the end of third grade.
Research shows that if students are not reading proficiently by the end of third grade, they are likely to remain poor readers throughout their life and lag in other educational markers of success like graduating on time.
Additionally, results from this year’s ILEARN assessment, the state’s standardized test for grades 3-8, showed that statewide only 41.2% of students are at or above proficiency standards for English language arts.
20% of third grade kids can't read at what is undoubtedly an already low standard. Of course that is not the whole story as we see in the next paragraph.
The state also continues to see an achievement gap with its students of color for literacy with only 64.1% of Black students and 69.6% of Latino students passing the IREAD-3 assessment while 87.5% of white students passed.
Ah so. One third of the future doctors and physicists in the black student body can't read by 3rd grade and the fact that 2/3 did meet the standard tells you just how low that standard must be.
The Indiana you see in old photos and in movies like Hoosiers is quickly disappearing. As of the last census Indiana was down to 75% White and that percentage is dropping fast. The state capitol of Indianapolis is allegedly at 50.1% White but I doubt that is true, down from 81% in 1970. The big change in Indy is the black and mestizo population:

Just a few years ago Indianapolis was considered one of the very nicest big cities in America. In the span of my lifetime it went from a very nice place to live to a city that set a new record for homicides in 2021 and is on pace for a brutal year in 2022. The reason is shown above and the story is the same across the country and the West: massive displacement of heritage Whites replaced by blacks and mestizos.
Less intelligent people make less intelligent babies who end up as less intelligent students. No amount of added funding can change that significantly. Certainly having extra programs, teachers and resources can help a little bit but I maintain that intelligence is overwhelmingly a matter of biology rather than sociology.
The saying is true. Import the third world, become the third world.
There are markers along the way that have led us to this place.
First and one of the most important was the failure to deal with the suddenly freed African slave population following the Civil War. During the decade of the Civil War from 1860-1870 there are around four and a half million blacks in America.

I am not sure how this happened but by the end of 1880 that number had increased to 6.5 million and went up by a million a year for through 1920. As of the last census there are over 40 million blacks in America and the system is finally buckling under the strain. Failing to deal with the African population which has proven to be incompatible with a White Western nation is one of the greatest mistakes in American history. We don't need to rehash all of the arguments here again, just suffice it to say that for the last 150 years since the end of the Civil War the Africans living in America have been an anchor holding America back.
Another major milestone in the decline is on the opposite end of the IQ spectrum, the immigration of Jews from Eastern Europe. I try to avoid making reductio ad Juden statements and am suspicious of anonymous online account that blame everything and anything on the Joos. Still despite their vaunted Ashkenazi IQs it is hard to avoid noticing that an unseemly disproportionate number of terrible people are Jews of Eastern European ancestry. While they come from Europe and can pass for White they are very much not White in terms of culture and politics.
Over the course of less than 45 years from 1880 to 1924 a huge number of Jews came to America, in excess of 2 million. They would play an outsized role in forming modern American culture and they also tended to embrace alien concepts at odds with heritage American beliefs. From Jewish Immigration to America: Three Waves.... 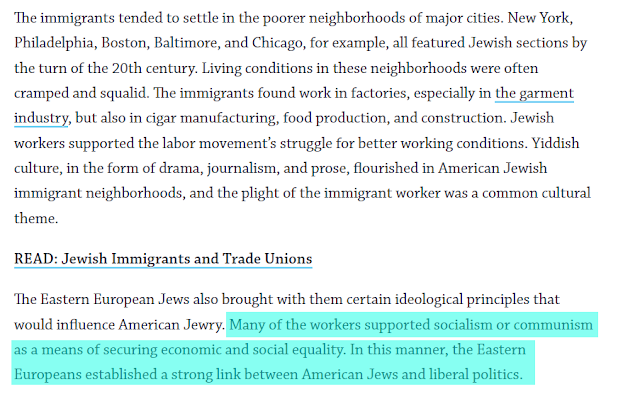 This tradition lingers today and despite the endless groveling and fellating of the Israel lobby by Republicans, Jews reliably vote for Democrats by a margin of 3-1 or worse. That hasn't stopped the Normiecons from chasing after the Jewish vote, like this article from Breitbart right after the 2020 election: 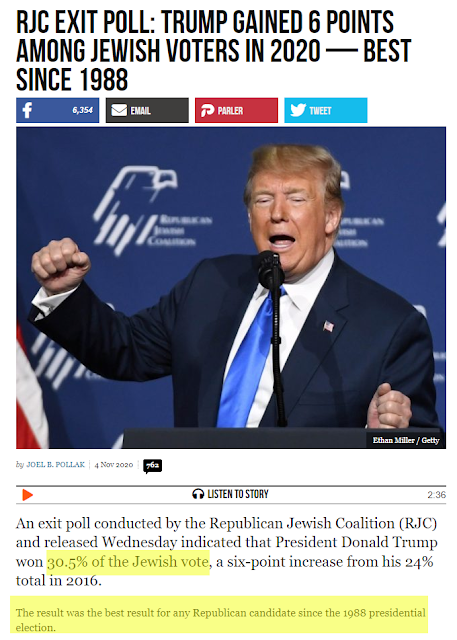 Another, more accurate way of saying this: Despite doing everything in his power to appeal to Jews, including moving the U.S. embassy in Israel, Jews still voted 70% for Joe Biden. This has been the case for basically all of American political history since Jews were in large enough numbers to impact elections and they have been at the vanguard of most of the leftist changes to our system.
The third of course is the Hart-Celler Act Immigration and Nationality Act of 1965 that "reformed" American immigration laws by throwing open the doors and letting everyone who wanted to crash on our couch do so. The results have been catastrophic.

The people who made America are now barely a majority in our own country with the difference mostly coming from mestizos who have gone from barely 3% of the population to rapidly closing in on 20%, and in many places they are a majority of the population. For example, the second largest city in America, Los Angeles, epitomizes these changes.

In 1940 L.A. was 86% White. By 1970 that has down near 60% while blacks made up 18% with mestizos close behind. Not surprisingly in the 1980s L.A. became Ground Zero for the black ghetto gang wars between the Crips and Bloods but this would change quickly as mestizos swamped the black population and now are close to an absolute majority in L.A. while Whites are under 30% and blacks are down to 8%. This is happening all around L.A., Watts famous for the black race riots in the 60s is now only 37% black and is 61% mestizo while Whites make up around one half of one percent. Compton, the city in the L.A. area made infamous in "songs" like Straight Outta Compton is now 25% black and dropping fast while mestizos make up over 70% of the population. I've been through Compton and neighboring areas like Gardena, and it really looked like I was driving around in a rap video.
All of that to say that we are on the leading edge of the stupidification of America. The people that once dominated the Nobel prize ranks now is full of illiterate street shitters and violent criminals. We once had dreams of exploring the stars, now we our schools are full of little black and brown kids that can't read or control themselves......

For more on this see my post The Dumbing Down Of America. On the bright side, being reasonably literate in 2022 means you are already of well above average intelligence.
Posted by Arthur Sido at 11:21 AM