Heather Mac Donald writing at City-Journal takes a look at a topic of frequent note here at Dissident Thoughts, the degradation of the medical profession in a vain quest to make the medical field more "diverse", in other words less White. Her post The Corruption of Medicine is quite long but it contains a ton of data, including these charming statistics: 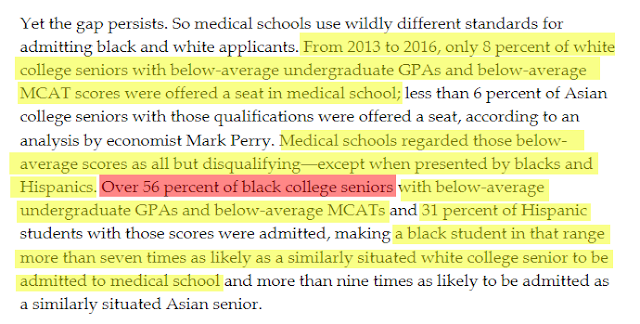 Read that again. A black student with mediocre scores is seven times as likely as a White student with similar scores to be admitted to medical school. If you are a White student with less than stellar scores on the MCAT and a great GPA, you might as well not bother applying but if you are a slightly above average black student you are likely to be admitted.
Later Heather points out that even the lower standards are not good enough and advocates are demanding an end to the MCAT period... 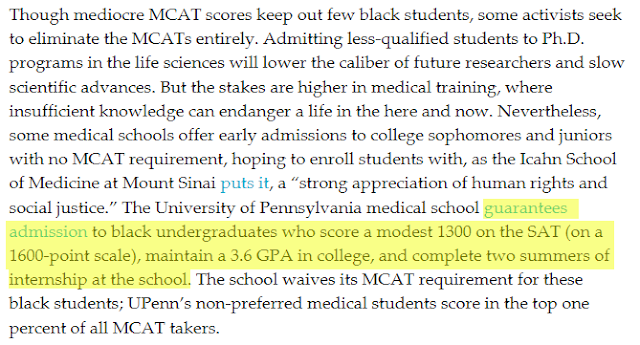 A 1300 on the SAT is around the 84% percentile, which is good but not great but if you are black, get a decent SAT score and a 3.6 GPA you are guaranteed a slot at UPenn medicine. Penn is one of the Ivy Leagues but clearly that means very little when you are black. There is a completely different admission standard for black graduates and this lower standard means that completely underqualified blacks are getting slots in medical school over much more qualified White and Asian applicants.
This has been going on for a while but there was a major problem. When these black and mestizo students got into medical school, they ran into the brutal gauntlet of actually being a medical school student.
One of the major milestones in medical school comes at the end of the second year with the "Step One" test. Mac Donald describes it:

Basically Step One measures whether you have mastered the basic concepts of the human anatomy which proves you are learning what you are supposed to be learning. High scoring students would be at an advantage in applying for selective residency programs. Of course this also exposed that black students who were underqualified were remaining underqualified well into medical school:
Black students are not admitted into competitive residencies at the same rate as whites because their average Step One test scores are a standard deviation below those of whites.
They tried dumbing down the Step One by including 'nonscience components such as “communication and interpersonal skills.”' but the gap remained. How to solve this dilemma? There is an easy solution for that as well.

If something is too hard for blacks, you just get rid of it and who gives a shit if it results in less qualified doctors? Our daughter took the Step One earlier this year and of course passed it but no matter how much she smashed the test, her result will look the same as a black student who barely passed.
At every stage, black and mestizo med students trail their White and Asian peers and at every stage the medical school establishment tries to tip the scales to "fix the problem". I covered this previously in this post, We Wuz Otolaryngologists And Sheeit!. The result will be less qualified and less competent doctors, reinforcing my admonition to find a White male doctor who graduated medical school at least 10 years ago. It also means that any black or mestizo doctor will automatically be assumed to have gotten into and through medical school based on racial coddling, not their own merit, right or wrong.
To be clear, being smart is not a sufficient qualification for being a good doctor but it is a necessary qualification. There is a minimum standard of intelligence necessary to being a physician. The human body is incredibly complex and the stuff that can happen to your body is likewise complex. You need to be intelligent enough to learn, retain and apply a lot of knowledge to be a physician. I freely admit that while I am smarter than the average bear, I don't have the type of mind you need to be a doctor. My intelligence is geared more toward things like writing and speaking, not hard science and math. It's not for everyone and moreover you shouldn't want it to be for everyone, not when the decisions doctors make dozens of times a day can be the difference between life and death.
Heather Mac Donald also points out that it isn't just medical school that is slandered as "racist". Disparate health outcomes are also of course a sign of "systemic racism" in the medical community and another reason why we need more, dumber, black and mestizo doctors. It isn't that blacks engage in behavior that leads to poor medical outcomes, like shooting each other and being morbidly obese. Nope, it is that racist doctors don't treat them as well as they treat White patients.
Kind of like monkeypox. The obvious solution is for fags to stop sodomizing random dudes by the dozens for a couple of weeks. You know, to flatten the curve. But we can't tell fags to stop engaging in risky sexual behavior so instead we all have to pretend that a disease that almost exclusively impacts sodomites is a public health crisis. No one is responsible for their own health decisions, not fags and not blacks.
Figuring out medical care for you and your family right now is one of the most important preps you can engage in. Don't wait until it's too late to figure this out.
For more medical shenanigans, follow Doctor Samizdat on Substack.
Posted by Arthur Sido at 1:45 PM