Knew It As Soon As I Saw It

Allegedly a black girl on Duke's volleyball named Rachel Richardson was playing some v-ball against BYU and wouldn't you know it, some mean White guy was yelling "nigger!" at her every time she is served and also was threatening her life. Of course, Brigham Young's team is all White: 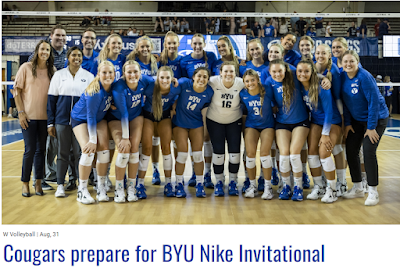 Fitting from a university named after a guy who affirmed that black skin is the curse of Cain and that miscegenation should be punishable by immediate death. Based?
Anyhoo, everyone was outraged and upset and angry and sad and of course apologetic.
And of course....

On Tuesday, BYU officials said they were still investigating the alleged incident. BYU police Lt. George Besendorfer said an initial investigation of the footage from the crowd did not appear to show the person who was banned shouting anything while Richardson was serving.
"When we watched the video, we did not observe that behavior from him," Besendorfer said via the Salt Lake Tribune.
BYU associate athletic director Jon McBride added that several athletics employees have been combing through all the footage the team has access to and have not found evidence of racial slurs being shouted.
"Various BYU Athletics employees have been reviewing video from BYUtv and other cameras in the facility that the volleyball team has access to for film review. This has been ongoing since right after the match on Friday night," McBride said in a statement. "The person who was banned was the person identified by Duke as using racial slurs. However, we have been unable to find any evidence of that person using slurs in the match."
Well of course not.
Think about the claim for all of three seconds. In a public venue with over 5,000 people ogling young women in skimpy shorts enjoying a game of volleyball, a guy repeatedly for the course of what, an hour or more, was shouting nigger at a black girl. Can you think of any place where any White person would shout nigger at a black chick and that no one would do anything about it? Especially at a university event?
Get. The. Fuck. Outta. Here.
This story was Jussie Smollett levels of ridiculous and unbelievable but of course the media ate it up and BYU's athletic department issued a "formal statement" condemning the behavior....that didn't happen. They banned the kid for life from BYU sporting events.
And it didn't happen. Not repeatedly. Not once.
How much of a mental basket case are you that you are so desperate for attention that you would lie about something that is easily disproven thanks to lots and lots of videos?
Posted by Arthur Sido at 8:43 PM