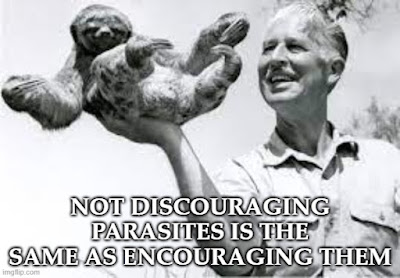 You never know what you might find wandering around the internet. Came across an interesting term the other day while checking to see if the Wikipedia entry for monkeypox is locked (it is). The term was kleptoparasitism, or parasitism by theft. From Wikipedia....

Kleptoparasitism (etymologically, parasitism by theft) is a form of feeding in which one animal deliberately takes food from another. The strategy is evolutionarily stable when stealing is less costly than direct feeding, which can mean when food is scarce or when victims are abundant.

Remember that last line, it will be important.
I saw this term in the article about the crab-eating macaque. Yeah, I hadn't heard of them either. They are monkeys that eat crabs but this was interesting in the section about the interactions with humans.

The macaques have also developed a reputation for actively stealing items from humans (cameras, eyeglasses, hats, etc.), then refusing to return their stolen goods until given food in return. This unique form of kleptoparasitism (known as "robbing and bartering") has primarily been observed in smaller groups of macaques living near Hindu temples and tourist-heavy areas, suggesting it is a learned behaviour within social groups, in response to realizing that humans would trade food for their possessions back.