The sequel to Top Gun, Top Gun Maverick, finally came out in a format that would allow me to watch it without violating my pledge to never spend another nickel on anything Hollywood puts out. It is one of the most hyped films in a long time, the alleged proof that non-woke films are box office winners. Based on what IMDb has posted, that certainly seems to be true:

I have seen figures nearing $100 million for Tim Cruise based on whatever cut he gets. Nice work if you can get it.
I purposely avoided any reviews so I could watch it with eyes wide open to see for myself if it met the hype. After watching it, did it live up to the billing?
Kinda. I guess.
The flying scenes were great, if unrealistic. Cruise is in amazing shape for someone a decade older than me, although the plastic surgery makes it hard to look at him. The scene between Cruise and Val Kilmer was very touching. The opening montage on the deck of a carrier, watching the deck crew work their magic in launching and recovering planes was incredible.
The rest of the movie was just OK.
Plot spoilers ahead.
The main storyline is that Maverick is being called back to train Top Gun pilots for a seemingly impossible mission, flying down a narrow canyon at high speed, avoiding fixed emplacements and superior enemy fighters in order to bomb a very small exhaust vent on top of a reactor housing a uranium enrichment facility. How small? 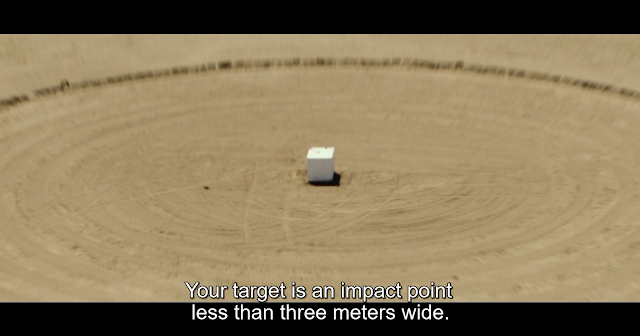 That all sounds very familiar, down to the way the target is described. In fact it sounds like....

All that was missing was Maverick saying: "I used to bullseye womp rats in my T-16 back home, they're not much bigger than two three meters.". It is basically the ending of Star Wars.
The holes in the plot were enormous
As for this uranium enrichment facility in an unnamed country (the symbol on the bad guy's wings is cleverly blurred in every scene)? Well the whole movie is predicated around this heavily guarded facility. 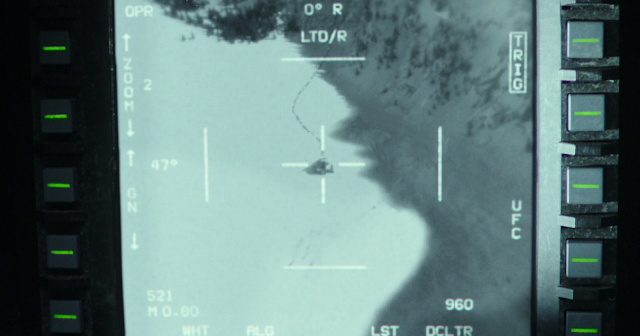 There is what looks like a foot path to this vent. In the other footage of the surrounding area of the facility there is nothing. No roads, no power lines that I saw. Just a single little shack on top of a snow covered depression between two mountains. I assume you enter the facility from somewhere else but damned if I could figure out how you get into the place.
Then there is the reason they have to fly so low down this canyon. There are SAM emplacements all along the route but instead of blowing them up with cruise missiles or some other means, they just plan on flying below them? I know there is supposed to be "GPS jamming" but I am pretty sure they can still hit a target with some sort of missile. Nope, they stay in place because it is important to the plot.
The other piece is that they are supposed to be outclassed by the enemies "fifth generation fighters" and they only send in the four planes needed for the attack. Huh?
The U.S.S. Ronald Reagan (CVN-76) Nimitz-class supercarrier has a complement of somewhere between 60-90 aircraft. Some are choppers of course but from what I can tell they normally carry 34-48 F/A-18 fighters. Even cutting that in half for the four planes in the mission, reserve planes and combat air patrol to guard the carrier, that means at least 18 fighters who could have come in behind the four planes to provide cover for them against enemy fighters. Since they already launched an attack on the facility as well as blowing the crap out of an airbase with cruise missiles, it wasn't like they needed to be concerned about causing an international incident. With our electronic superiority, they would have made mincemeat out of the couple of surviving enemy fighters but nope. Just these four going solo.
Everyone knew from the get-go that Maverick wouldn't just train these pilots but would fly the mission. He consistently outflies the much younger Top Gun graduates, apparently being nigh invincible in the air, killing the very best the Navy has to offer with ease. Tom Cruise was 59 during filming or about ten years older than me. When I turned 40 I noticed a significant drop-off in both my eyesight and my reflexes. At 50? It has gotten worse. I can feel it when I play video games, which is far less physically taxing than flying a plane at 5-6 Gs. Somehow Maverick can outfly pilots 20 or 30 years younger than him?
The casting was hit or miss. Miles Teller is very good as Rooster and he looks enough like Goose to be convincing. Jennifer Connolly is OK, but there was no chemistry between them like there was with Kelly McGillis. They seemed more like a couple of friends, maybe that was intended.
Even in a "non-woke" film there was plenty of wokeness. Of the four pilots chosen for the mission, Maverick and Rooster were White because continuity demanded it but the other two were a chick and a black guy. The rest of the 12 former Top Gun pilots.... 7 are Asians, blacks, mestizos. Five are White guys. In the real world I am guessing that the ranks of naval aviators doesn't look like that. The admirals heading up the mission are one hard assed guy who is a jerk and doesn't think Maverick can do it, and seems willing to let everyone die to complete the mission. He is White of course. The good guy admiral who believes in Maverick is black. Of course.
The weirdest character was Warrant Officer 1 Bernie 'Hondo' Coleman, played by Bashir Salahuddin. This guy was everywhere in the film.
Here he is apparently running the show at a top secret experimental jet program. Why is a warrant officer running a top secret jet program? Don't know. 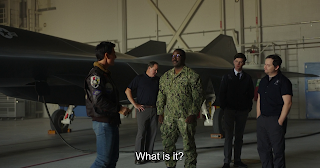 Then here he is at the Top Gun training briefing. Why is he there? Don't know. 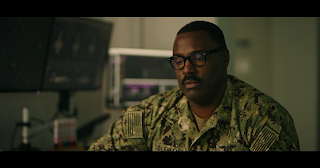 Now he is in the command center of the carrier during the assault. Why is he there? Don't know. 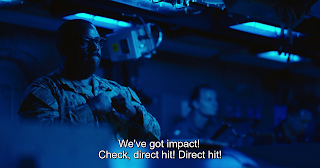 Then finally he is on the deck of an aircraft carrier, apparently working alongside the deck crew. Why is he there and how is he remotely qualified to do this extremely dangerous and specialized role? Don't know. 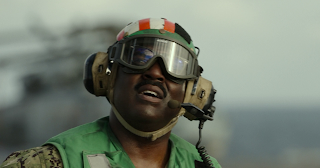 What can't this guy do? He is the most versatile warrant officer in the history of warrant officers. Or maybe they just needed a black sidekick to offset the problem of  Maverick, Rooster and Connolly all being White.
Anyway. The movie was OK, it was fun as long as you didn't think much or ask any questions at all. The fact that it was so well received and acclaimed by Normiecons beyond just the obvious nostalgia value tells you just how shitty modern movies are. In a sane world this would have been a maybe $500 million movie instead of a $1.2 billion juggernaut.
One more thing They have ruined for us.
Posted by Arthur Sido at 4:45 PM