Of all the aspects of modern "culture", fast food remains one of the most vulgar. Relatively cheap, low quality "food" shoved out of a window by a typically illiterate buffoon, intended to be shoveled in your pie hole as quickly as possible while driving. Everything about it is lowest common denominator, unhealthy, disposable.
It also seems to bring out the worst in blacks and that is saying something. Sort of like hookah lounges.
Wrong order at Wendy's leads to shooting, Frisco police say
Guess who!

Check out the dead eyes on Shaquita in the middle. No I didn't make that up, it really is her name, Shaquita Glaspie. The fella on the left showing us his flared nostrils in what I assume is some sort of primal posturing is Christian Ellis, a 19 year old future otolaryngologist. The guy on the right is 19 year old Tyran McLeod. Why was 33 year old Shaquita rolling with two 19 year old dudes? We probably really don't want to know. Maybe she was one of their moms, it wouldn't be unheard of for a lovely lady like that to squeeze out a little rocket scientist at 14 years of age.
They decided to get some vittles at Wendys and the results....were predictable.
According to officers, a customer in the drive-thru was unhappy with their order, then entered the store and began arguing with workers.
Police say the customer went to his vehicle and grabbed a gun, shooting at the front of the building before driving off.
No one was hit in the shooting.
Mr. Ellis is 19 and I was pretty dumb when I was 19 but what exactly was he hoping to accomplish by "shooting at the front of the building"? While I have been rightly accused of having a bad temper, it would never have occurred to me at any stage in my life to shoot at a building because my Baconator was improperly prepared, and believe me, I am serious as a heart attack about all things bacon-related. Now Mr. Ellis is looking at some bad times:
Frisco Police arrested 19-year-old Christian Ellis of Glenn Heights on Friday and charged him with aggravated assault with a deadly weapon.
19-year-old Tyran McLeod and 33-year-old Shaquita Glaspie of Little Elm, who police believe were in the car at the time of the shooting, were also arrested and charged with failure to report a felony.
If convicted, Ellis faces up to 20 years in prison and a fine up to $10,000.
Up to 20 years. He won't get sentenced to anywhere near that but probably at least 4-5 years in the slammer. For shooting at a Wendys because he was in a rage over his order being wrong. It isn't like Frisco, Texas is the 'hood or anything. The city is less than 10% black and has a median household income over $100 grand. 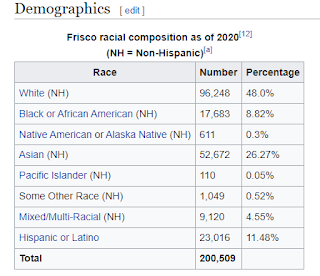 But you see, Mr. Ellis wasn't from Frisco, he hails from the lovely burg of Glenn Heights, Texas. 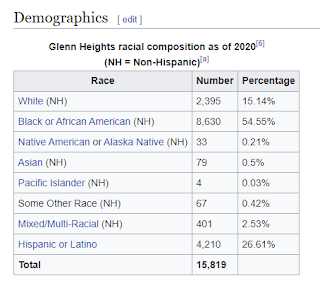 Ah, that's more like it. Frisco is on the extreme north side of the Dallas-Fort Worth metroplex while Glenn Heights is on the south side. I don't know if the south side of DFW is more dangerous or not but Glenn Heights is about a 45 minute drive away from Frisco up I-35E.
The lesson here? If they can get on a road, diversity can find you anywhere so you should always have your head on a swivel because you never know when they might get mad and start shooting up buildings. Or when someone like Antoine Kendrick might slide up behind you while you aren't looking, punch you out and kill you.
Even when they get delivery it goes badly.
Couple fighting over food delivery may have led to deadly Lee County shooting
Guess who!

Investigators say a couple arguing over food delivery at a Lee County home may have led to a deadly shooting late Saturday night. The woman is now facing a Manslaughter charge in the death of her boyfriend.
On Saturday, August 20, 2022, Lee County Sheriff’s investigators believe food was delivered to a home along Lee Road 620. Detectives say the couple inside, 29-year-old Vonguetta Levett and her boyfriend, 23-year-old Elisha Benjamin, began arguing about the meal.
According to court documents, investigators allege during the domestic altercation, Levett left Benjamin in the master bedroom, retrieved a pistol from the living room, and returned to the master bedroom, where investigators say she shot and killed him.
Vonguetta? That is a new one. This happened in Loachapoka, Alabama and no offense to Alabamians but that souns like the kind of place where black women shootz dey boy-fran cuz he dumb 'bout ordering dey food. Loachapoka has a population of a whopping 160 pee-po and of those over 60% are black. Median household income of $30,938 which works out to $14.87/hour for a full time job. Nice place, all of five miles from Auburn University. War Eagle!
If we really want to reduce gun violence in America, may I suggest mandatory Home Economics classes in all urban schools. Perhaps if they are more prone to preparing food at home they will stop killing old White men eating Frostys or shooting at innocent fast food restaurants or murdering one another at home over delivery orders?
Posted by Arthur Sido at 9:26 AM