The police in Atlanta, Georgia have been dealing with a very serious crime but it looks like they have caught their man! 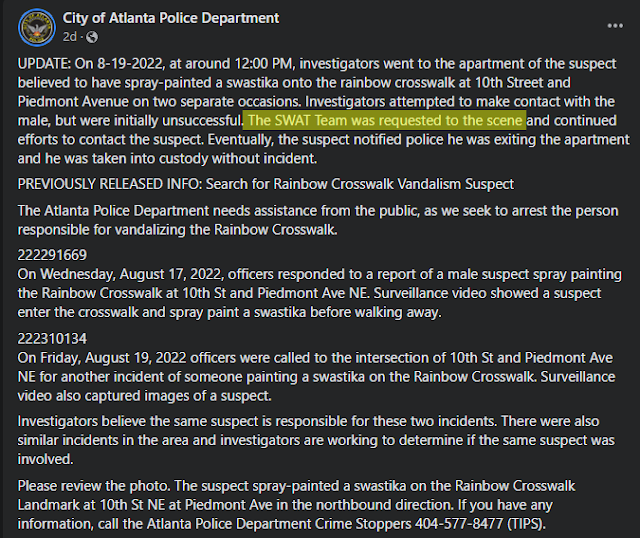 Read that again. They sent a SWAT Team to apprehend a man who was wanted....for spray-painting the road. I am pretty sure vandalism is a misdemeanor but they broke out the SWAT team? Who says the police are over-militarized and looking for any excuse to break out the big toys?
Who was the homophobic Nazi out spraypainting rainbow crosswalks in Atlanta? Here is the photo provided by the Atlanta PD in their Facebook post: 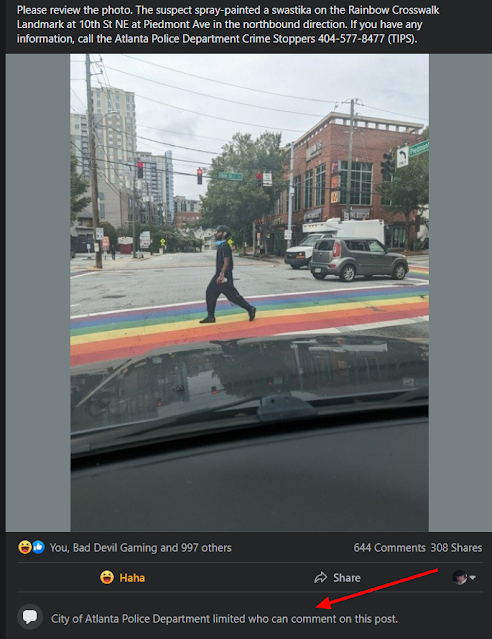 Hey that kinda looks like me!
I like that the APD limited comments after people were trolling the shit out of them.
One of the big flaws in the leftist playbook is that the various groups that form their coalition are united only by their hatred of normal White people and beyond that these groups don't like each other, and often hate each other almost as much as they hate us. blacks don't like mestizos, blacks don't like fags, blacks don't like Jews or Asians and in return most of those groups don't really like blacks either. The only thing that keeps them from killing each other is their mutual hatred of Whites but in places where that isn't a major factor you see lots of conflict, especially between mestizo and black gangs. How many fags live in mostly black neighborhoods? Not many, they like to live in nice White neighborhoods with local bistros to sip cappuccinos on Sunday morning after a long Saturday night of vigorously sodomizing random dudes and hoping to not contract monkeypox.
Despite the gaslighting, normal White people are the least dangerous and offensive people in this country. Hopefully that will change soon.
Posted by Arthur Sido at 11:34 AM