Each day brings a new reminder of the dystopian hellhole we are descending into. Today I see that Google is trying to "prebunk" "misinformation" rather than "debunking" it. In simpler terms they are attempting to convince people that questions about the official narrative are wrong before you even are exposed to those questions: 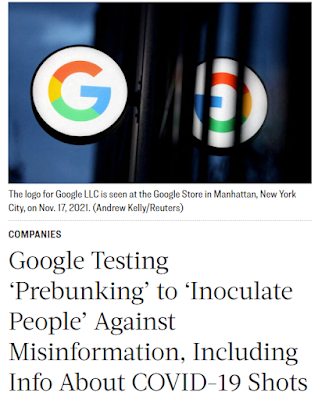 Google Testing ‘Prebunking’ to ‘Inoculate People’ Against Misinformation, Including Info About COVID-19 Shots
“These effects are robust across the political spectrum and a wide variety of covariates,” they wrote. “We show that psychological inoculation campaigns on social media are effective at improving misinformation resilience at scale.”
“Online misinformation continues to have adverse consequences for society,” the study states. “Inoculation theory has been put forward as a way to reduce susceptibility to misinformation by informing people about how they might be misinformed, but its scalability has been elusive both at a theoretical level and a practical level.”
It is pretty clever, they twist actual serious inquiry into immediate suspicion because people will be brainwashed inoculated to automatically distrust any information that is contra-official narrative. How will they get this "inoculation" out in mass? Well remember that Google owns Youtube.....
“YouTube has well over two billion active users worldwide. Our videos could easily be embedded within the ad space on YouTube to prebunk misinformation,” said study co-author Prof. Sander van der Linden, head of SDML.
That is incredibly interesting. Youtube generates income in large part via selling ad space on videos. If they are going to replace ads with this "inoculation" nonsense, it means either fewer revenue generating ads or it means increasing the interruptions to videos. I already can't stand watching Youtube on my phone, when I watch on my desktop my ad blocker is very effective at blocking all of the ads. Alphabet, the parent company of Google and Youtube, is willing to give up significant revenue apparently in order to "fight online misinformation". Of course it is possible/likely that there will be government grant money given to Alphabet for helping to prevent "online misinformation" to offset lost revenue.
Big Government and Big Business are really just two aspects of the same globalist entity. Big Business is frequently used by Big Government to enact censorship that Big Government is legally prohibited from doing while Big Business uses their enormous revenue to line the pockets of politicians and bureaucrats.
While most didn't realize at the time, the Tea Party and Occupy Wall Street were both fighting the same enemy but thought they were fighting each other. There isn't a significant distinction any longer between Big Government and Big Business and what we are left with takes the worst aspect of both Bolshevism and National Socialism and combines them into a new monstrous goliath that controls every aspect of our lives.
Posted by Arthur Sido at 10:25 AM