Your Most Dangerous Adversary Right Now

(This is kind of a stream of consciousness ramble....)
It is not who you might think.
It isn't antifa or George Soros or Klaus Schwab. What can you do about those kind of people? Someone like Bill Gates dwells in a different world from me, untouchable by a mere mortal like me.
Nor is it Joe Biden (snort) or Nancy Pelosi or any of the low IQ puppets in D.C.
It probably isn't black violent criminals or antifa as most of my readership seems to live apart from those groups.
Nope. The one person who is the greatest danger to you....
...is you.
When I am getting ready to go workout, it isn't AOC who is telling me to just stay home, that I'm too tired or sore. It's me.
When I have a task or project to work on at home, it isn't a Rothschild whispering in my ear telling me to just sit in front of my computer and play a video game. Me again.
When I decide to blow some money on something stupid and frivolous because of the brief dopamine hit instead of using those funds for preps, who is telling me to do that? It ain't Hunter Biden.
Like most people I struggle daily with a sort of split personality, the voice of who I want to be and the voice of decades of bad habits. It is frustrating, an external voice wishing me harm is easy to spot, to categorize as an enemy and to ignore (or do the opposite of) but when it is in your head it is a lot tougher to overcome.
It is a daily, endless struggle and will be for as long as I draw breath.
The insidious part is that generally it is only me who knows which way I choose. My wife isn't going to badger me if I stay home instead of working out. The only person who is going to hold me accountable is me. 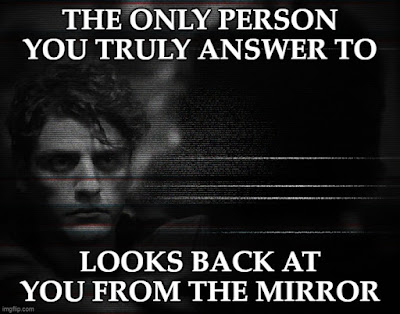 Ultimately I just can't be satisfied with where I am, rather I need to be moving forward toward a goal that I will never reach. Sometimes those are the best kind of goals anyway. If you aren't moving forward, especially at my age, you are going backward.
I read something this week that dovetailed nicely with these thoughts I was pondering, from Paul Waggener of Operation Werewolf: Welcome Back
Perfection is impossible to attain, unless, perhaps, one turns their life into a single line of poetry, written with a splash of blood.
I’m still bleeding. Still trying. Still living.
And in the recent months, still realizing that politeness and compassion are always going to be good things, but my weaker self doesn’t need as much compassion from me as I sometimes allow myself to believe.
It needs an Iron Fist.
And when I feel myself tapping on my own shoulder, saying, “come on. This way,” and I ignore it…
I need a hammer to the face.
Pretty profound, especially this: "my weaker self doesn’t need as much compassion from me as I sometimes allow myself to believe".
No one makes more excuses or provides more leeway for me than me. I can justify being weak or lazy to myself all day long. I have had plenty of practice making excuses, literal decades of slowly getting weaker physically and mentally. Always convincing myself that I could be in better shape if I wanted to, it would be easy.
It isn't easy.
Sure it used to be. When I was a kid I could put in fairly minimal effort and still looked toned, I could run forever and pick up the heavy stuff. It was easy and that was what held me back. I was strong enough to just get by in wrestling so I was content to do just enough but guys who were weaker than me could beat me because they put in the work. I didn't really care, I was in it more for the trappings of being on "the team" than in getting better.
The same was true intellectually. No one coasted through high school quite like me. I don't recall ever studying or doing homework, I could slap assignments together with a word salad and get by. It mostly worked in college too, when something was challenging I just dropped the class and took something else. That is why I didn't learn a damn thing but I still got my obedience school completion trophy diploma.
When I got out I could have done something challenging, gone to law school or followed through with entering officer candidate school in the military but those were hard so I didn't.
That way is hard, this way is easy. I'll take the easy. Rinse. Repeat.
That has been the pattern and I'm not proud of it.
But I can choose to change that pattern and each day, moment by moment, I can overcome that old me that wants to hide and fade away.
I will never become the man that I truly want to be and I am not interested in empty platitudes as substitutes for real action. But that doesn't mean I can't be better.
My future is not to be a tatted up, motorcycle riding, powerlifting Jiu Jitsu philosopher like Paul Waggener but that isn't really my thing anyway. It would be cool to sit down and talk with him but I don't want to be him. Can I be a better man than I was five or ten years ago? Can I be a better man today than I was yesterday? Can I do it without making excuses or taking cheap shortcuts?
You are damn right I can and the only person who is holding me back is me.
Those People™ want me dead but they aren't stopping me from being a better me. I am. The future belongs to those who want it the most and that starts with each of us making basic choices.
We are on the edge of the scariest but also most exciting time in the last century of human history. I am not going to hide in the woods and hope to die before it gets ugly. I owe it to my posterity and to my people to do what I can, while I can and that means stamping the old, lazy, fearful, weak man I was into a bloody pulp and being something better.
Day by day. Decision point after decision point.
Who am I going to be?
Who are you going to be?
I'll close with a final quote from Paul Waggener that applies to all of us, the essential ingredients for survival while building a new world from the ashes of the old.