How about some lighter posts, it has been non-stop grim around here. 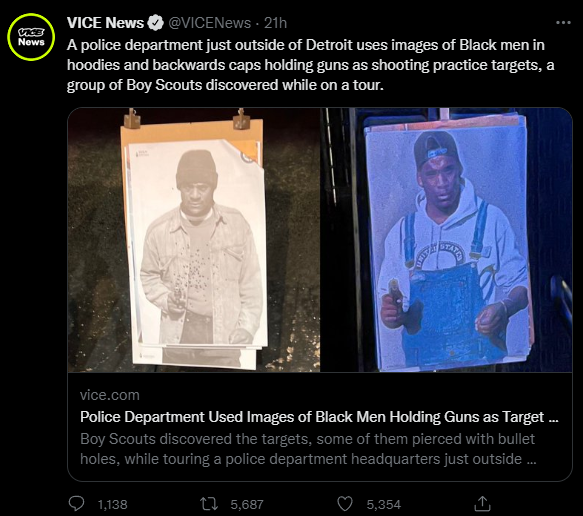 Police department? More like BASED Department. Also, when was the last time you saw a black guy wearing denim bib overalls?
The city in question is Farmington Hills, a mostly nice town that does get some overflow crime from Detroit which is....almost entirely black. But there is more to the story:
“A diverse group of targets were on display the day of the tour—not just targets featuring Black people,” King said. “Unfortunately, this was not accurately depicted in the photographs, as the photographs only depict a small area of the department’s firing range and a select number of the targets that were presented and discussed during the group tour.”
He said the department uses images of a dozen different people, 10 of whom are white and two Black, in line with Michigan’s Commission on Law Enforcement Standards, as well as the city’s demographics. (Farmington Hills is 18.5 percent Black and 62 percent white, according to the 2020 U.S. census.)
So there are a few black men in the targets but mostly White men, but whoever took the photos only took pictures of the black men in the targets. That sounds about right. The police chief, Jeff King, of course apologized and groveled but all that did was confirm to the lunatics that they must have done something wrong when in fact they did not. Never, EVER apologize.
More pretending that black men don't commit crimes, that should help reduce the slaughter in our cities.
Posted by Arthur Sido at 7:15 AM