This Isn't Your Country Anymore

Is there anything more quintessentially American, more Midwestern and wholesome, than the county fair? Just about every county in America has one, from urban counties to the smallest county fair in Podunk, Nebraska. For city folk it is a chance to see some livestock up close and get a small taste of country life, but for people who show at the fair it is like the Super Bowl. It was a time for people to show off the hard work they put in, whether that was a steer that they had raised from a calf or a giant vegetable or an arts & craft project.
As a kid in FFA I showed chickens and hogs at the Lucas County Fair. It is different being an exhibitor at the fair, instead of visiting for a few hours you are at the fair for most of the day all week. You have to make sure your animals are fed and watered, their pens were kept clean and be in place for your showing wearing black pants and a white dress shirt. Many of us stayed in tents or campers all week with the predictable unsupervised shenanigans going on but it was mostly harmless teen stuff. Some of the best memories of my youth happened at the fair.
The Lucas County Fair is also where I met my wife. We had run into one another at FFA events a couple of times before but at the fair was where we spent some casual time together and the first spark happened. The county fair for me in the 1980s was all about the lights and sound of the midway, fried foods, showing animals and young love.
That was then.
We went to a county fair here and there when we were younger and when some of our kids were little and in 4-H we went a few times in Northern Michigan to the very small Emmet County fair. Then last night I took a van load of Amish youth up to the Elkhart County Fair in Goshen, Indiana to see the rodeo. Amish young folk love the Western thing, they like horseback riding and country music and of course rodeo. The Elkhart County Fair proclaims itself the biggest county fair in Indiana and I can believe it. It appeared to be much larger than the Lucas County Fair we attended as kids and right away I knew things were different from back in my day.
Getting into the fair was a traffic nightmare, lots of people were showing up for the fair and especially the rodeo. As we slowly made our way to the parking area, we were greeted by a number of large road signs that declared: no smoking, no vaping, no drugs, no guns and no gang colors.
WTF? No gang colors? At a county fair in Goshen, Indiana?
It is even on the fair webpage....

I can report that I did not vape or smoke, or use drugs or wear gang colors. The absolutely no weapons part?
Yeah, don't tell me that fairgoers can't wear gang colors and then tell me I can't carry. Fuck you. The 2nd Amendment and common sense trump your rules.
Anyway, that was the first unpleasant reminder. The rodeo itself was pretty lame, a lot of the livestock didn't cooperate and the MC for the rodeo was talking non-stop on a loudspeaker that kept cutting out. For $10 at a county fair in Indiana you weren't going to get top quality rodeo acts, but the contestants gave it their all. They even had monkeys riding border collies herding sheep! 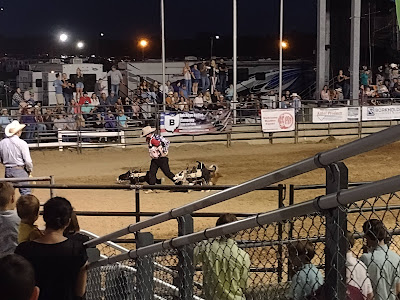 The crowd for the rodeo was about what you would expect, quite a few Amish and Mennonites, lots of White people including the obligatory tons of chicks of various ages all tarted up. Most should have made a different clothing choice. When it got over at a little after 10, the Amish young folks wanted to wander around the midway for a bit so we headed out.
That was like stepping into another world. It also explains the sign about no gang colors.
The usual sights and sounds were there, carnies trying to lure people in, the extremely unsafe looking mechanical rides, fried food of every possible kind. That was very familiar although the sheer size of the crowds was different.
What was different were the people. You would have thought you stepped off a plane in Juarez, Mexico. Mestizos of all shades, shapes and sizes clogged the sidewalks. The chatter was overwhelmingly in Spanish. Quite a few blacks as well. It is not a stretch to say that only about a third of the people I saw were White and no surprise there was a substantial police presence.
While Goshen is in mostly rural Elkhart County and northern Indiana as a whole is rural and White with lots of Amish, Goshen itself is rapidly changing along with the rest of what used to be America. 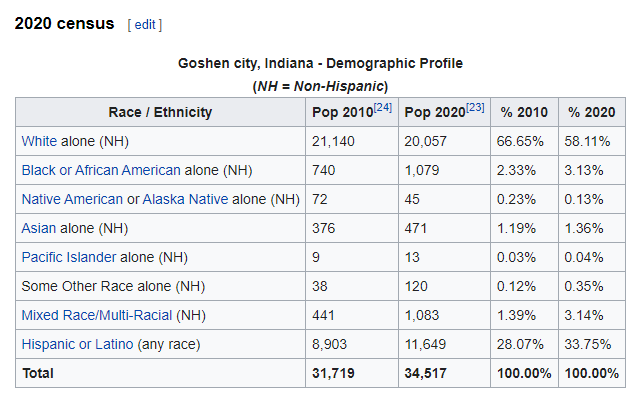 A full one third of Goshen residents are mestizo of some kind and it looked like they were all there last night.
Don't get me wrong, it wasn't like there were cock fights on the midway and no one was knifed, lots of families with small kids etc but then again as I like to point out, if mestizos made for good citizens their countries wouldn't be almost universally shitholes that they flee from to live in White countries.
Last night was another reminder of how degraded our nation has become. From bucolic county fairs full of White kids showing rabbits and sheep to signs declaring no gang colors. This is the sort of "progress" necessary for the Great Reset and it was on full display last night. There is no going back to the way it was, those days are gone and that country has been murdered before our very eyes. The only way now is to go forward through the fire and hope we make it out on the other side. 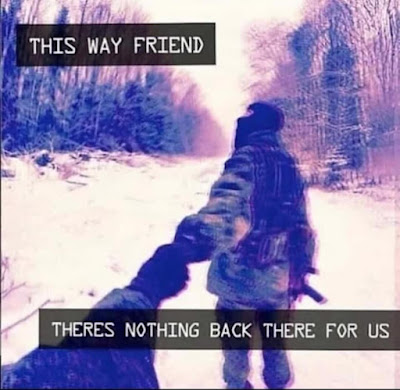