This Is Going To Get Bloody

Last night some weirdo named David G. Jakubonis of Fairport, N.Y. attacked Lee Zeldin, the Republican nominee for Governor in New York with a knife in his hand. Either the dude was crazy or this was a clumsy, botched assassination attempt but Zeldin predicted what would happen next.
Alleged Lee Zeldin attempted attacker charged with felony, immediately released just as congressman predicted
A man attempts to attack the Republican candidate for governor and is released on his own recognizance?
Even better, Democrat Governor Kathy Hochul sent out an email giving her supporters the location of Zeldin's rally 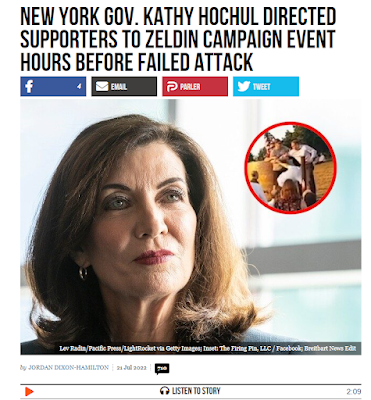 If a Republican did that, it would be considered incitement but nothing will happen to Hochul of course.
Zeldin, Rand Paul, Steve Scalise. For all of my life political violence has been overwhelmingly coming from the political Left and yet most Americans would say that "Right-wing domestic terrorism" is the real problem.
It is only a matter of time before one of these crazies ends up capping a Republican politician, especially if the Congress changes hands.
Posted by Arthur Sido at 8:40 AM