The (Fifth Wheel) Canary In The Coal Mine

Besides corn, one of the main things Indiana is known for is RV manufacturing. Northern Indiana is home to a ton of companies that build various kinds of recreational vehicles, from simple campers to enormous highway battleships that cost more than most houses. A not terribly well known fact is that this industry is largely driven (pun intended) by a seemingly unlikely group: the Amish.
While the Amish are often understandably associated with Lancaster, Pennsylvania they are all over the country. Five of the top ten largest settlements are in my state of Indiana including our local Allen County community that comes in number 10 on the list. We have around 27 "churches", semi-autonomous groups based on geography led by a bishop, but in northern Indiana? They have at last count around 200 churches so it is significantly larger.
Although most of the RV plants are in the northern extreme of the state near towns in Elkhart and Lagrange counties, there is a place somewhat closer to us where a number of Amish work and make a very nice living making RV trailers with fifth wheel attachments. Some of the young Amish who work there were making more than most middle age professionals. It is a long drive to get there and they start at some stupid time like 5 AM, but they make a lot of money and are done by 1-2 in the afternoon so they can get home and work more.
But live by the RV, die by the RV.
This week some Amish young women I know were laid off from their jobs at the RV trailer factory indefinitely. Then I saw this story: 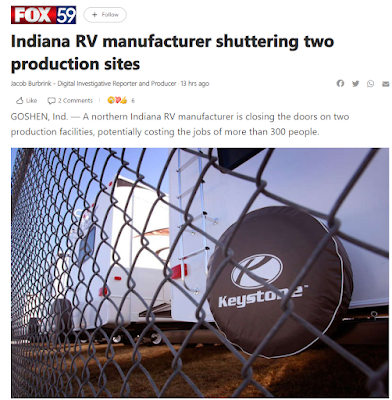 300 workers in Goshen is likely at least half Amish, the rest are probably Mexicans.
The RV industry has been booming for years but people are feeling the pinch. The industry is a good leading indicator of economic conditions. When times are good and people are feeling optimistic, RV sales go up but when people feel as though conditions are worsening? Well buying a quarter million dollar hotel on wheels falls off the priority list.
For poor people this doesn't matter much, they are often in less that ideal conditions (relatively speaking of course) all of the time. I've been poor and I've been wealthy and while it is true that money can't buy happiness, all things equal I would rather be rich and miserable than poor and miserable. Those poor folks aren't the people buying RVs. Middle class consumers do and that demographic is also the engine that drives our consumption based economy.
It might start with RVs, one the biggest and most expensive luxury items on the market but it won't stop there. Next might be skipping upgrading to the newest iPhone or the latest flat screen TV that is 1/4" bigger than the one you already own and it will continue from there. I have noted previously that people are maxing out credit cards and draining their savings, although I get credit card offers in the mail every damn day including from companies that I already have cards with. Derp.
If consumer consumption slumps, it will cause a snowball effect that will pick up speed as belt tightening begets belt tightening.
Having a localized slow down in the RV industry isn't itself a big deal, although the last time it happened in 2009 during the "housing crisis" it hammered the Amish community that had grown dependent on those fat RV plant checks. It even made the Wall Street Journal: A Bank Run Teaches the 'Plain People' About the Risks of Modernity and I see some of the same warning signs now.
New Amish houses are getting very fancy, with columns and stone or brick facing in contrast to the older, blocky white siding houses. Lots of lawn care services and random tchotchke ornamentation in the yards. There was quite the stir over the last month as one family put in an in-ground pool (the Amish keep calling them underground pools which I explain would fill with dirt) and another family blacktopped their drive which must be close to 100 yards long. I poke fun at some of them, they buy $15,000 buggies and $30,000 horses and then pay me to drive them around. A shut down of the RV industry will hurt a lot of families that have grown dependent on those jobs but it won't stop there.
The guy who works at the RV factory might not build a new barn or "company shed", and that is less work for the Amish carpenters. I am already hearing rumblings that some home builders who contract out to Amish have slowed/stopped new home construction. The community will be OK, lots of their businesses will keep thriving and they will band together. I know lots of Amish with six figure incomes and quite a few with seven figure incomes that will be just fine.
What about the rest of us?
That future is less secure. Slowing consumption will drag the entire economy down and a lot of people have stupid, meaningless jobs that likely won't survive.
One thing is certain, the slowdown won't end with the RV industry. Check your finances and ask the hard questions, if the economy goes south how will you make ends meet? This is something you should do anyway, especially if you are middle aged or older, but the urgency is ramped up now. With interest rates set to keep climbing I expect consumer loan defaults to also increase significantly, causing even more stress on the economy.
Tighten your belt where you can, squirrel away resources where possible, reset expectations for the near future. We are in the early stages of the Weimarization of America. The road ahead is gonna be bumpy. 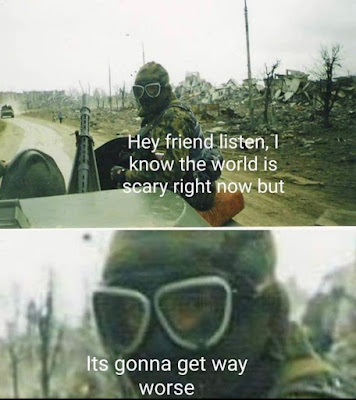