Speaking of Republicucks. The GOP nominee for Pennsylvania Governor, Doug Mastriano, had an account on Gab. That makes sense, Gab is free speech friendly and home to lots of MAGA types and Normiecon voters. Of course Gab, being a free speech platform, allows people to say whatever they want including saying nigger and questioning the Holocaust. That simply can't be allowed.
Doug's opponent, Democrat nominee Josh Shapiro (early life check? yep.) attacked Mastriano over having a Gab profile so what does Doug do? You can guess. 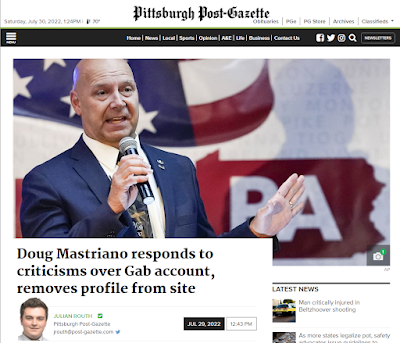 Dumb. Ass. When you do something like that, it is an admission that what you had done in the first place was wrong. Apparently being allowed to say whatever you want online, political free speech being one of the bedrock founding beliefs of America, is now a problem and something to be both ashamed of and in need of fixing.
The (((ADL))) was instrumental in getting him to close down his account, as were lawmakers in the Pittsburgh region near the Tree of Life synagogue shooting.
Mr. Shapiro, the sitting state attorney general, has seized on Mr. Mastriano’s payment to Gab as a sign that he’s too extreme to be governor and unfit for the office. Mr. Mastriano’s courting of support on Gab — “the premier website for white supremacists and the one used by the Tree of Life killer,” Mr. Shapiro said in a visit to Pittsburgh this week — shows he is “too extreme and dangerous” to lead Pennsylvania, the Democrat said.
The Anti-Defamation League, in a report in 2019, said accused Tree of Life gunman Robert Bowers was motivated by the idea that whites are in danger of being overrun by non-whites, and found an audience of similar extremists on Gab.
What did Doug gain by cowering in front of the ADL? Nothing but an admission of guilt. Lots of shooters have accounts on Twitter, Facebook, Instagram, TikTok, whatever but those sites never get blamed. But Gab? Anyone with an account on Gab is automatically complicit with the actions of anyone else who has an account on Gab. Doug is already regularly smeared by the Left, look at his Wikipedia page (which is locked by the way):

The entire thing is a partisan smear and of course his page is locked until right before the election. Convenient! Cucking to the ADL isn't going to change his wikipedia page which has enshrined his thought-crime of having a Gab account.

Republicans are just stupid, consistently moronic. I have been saying this for years, Quit Chasing The Stick. Republicans make some progress but then a Democrat makes some accusation of racism or antisemitism or transphobia and tosses it, and then the Republican dutifully forgets what he was talking about to chase the stick and explain why he isn't racist/sexist/antisemitic/homophobic etc. Rinse, repeat. That has been the sum of our political discourse for the last 20 years, Democrats calling Republicans names and Republicans obediently defending themselves against the name calling. It is a waste of time and it confirms that whatever you did that they are screeching about was wrong in the first place.
Dougie deserves to lose in November.
Congrats to Doug Mastriano, I award you the coveted King Of The Cucks award for this week! 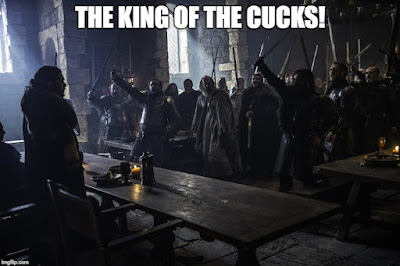