Not All Luxuries Are RVs and iPhones

Piggybacking on my prior post about the RV industry being an canary in the economic coalmine (The (Fifth Wheel) Canary In The Coal Mine). There is more news coming out about that and it sounds like the industry is in a general free fall: "All Of A Sudden, It Came To A Halt": After Posting Fresh Records Just Months Earlier, RV Industry Grinds To A Halt

We generally think of "luxuries" as something you can purchase if you have a bunch of money and/or a credit card with a high limit: fancy cars, designer clothing, the newest tech gadgets, recreational vehicles.
But not all luxuries are tangible goods, in fact many luxuries are lifestyle or societal.
A personal example: this blog.
I don't run ads or get any revenue from this blog so the time I spend writing can be considered somewhat frivolous. Because my businesses provide me with ample income, downtime and flexibility, I can take the time to scream into the aether via this outlet. It allows me to meet new people and interact online and more important it provides me with pleasure. I enjoy writing, and it sharpens my mind. Nothing makes you think through your positions like putting them out in public.
If I had to spend every waking hour making sure my wife and kids had enough to eat and were sheltered from the elements, I wouldn't have time to blog for sure or do any of the other stuff I like to do like reading or playing the occasional video game. All of our hobbies are luxuries, from hunting or fishing for pleasure to watching the ballgame on TV. Because of centuries of struggle and progress by our ancestors we now enjoy almost unlimited leisure activities. Even something as simple as closing your eyes in the hammock for half an hour is a luxury.
Again, these luxuries can only exist in a society that is relatively prosperous, free and safe. Those three words described American society in general over the last century but while they are still applicable for many of us, those days are waning in a hurry.
Not all of these intangible luxuries are a positive of course.
There are all sorts of societal maladies that can only exist in a society that protects the weak and the weird. One of these is "feminism", an ideology that claims that women can exist and thrive in a society without having men around in a traditional gender role arrangement (women caring for kids and keeping the home, men being the protector and provider).
What is endlessly amusing to me is that feminism itself is something that can only exist in a society where women are insulated from the consequences of their poor decisions by the very men they revile. Absent men who let women act against their self-interest and protect them from bad men, feminism doesn't exist.
Without the societal protections provided by men, women are in a much worse position. You don't hear a lot about feminism in the Congo or Afghanistan or Yemen because women there are just trying to survive and not get raped. Only in advanced nations with centuries of patriarchal protection built into the fabric of society can women venture out to screech about their "right" to murder their unborn child.
Tim Pool had an interesting conversation with his cast of misfits the other day addressing this issue......
One of his most salient points comes around at around the 13:30 mark where Tim says, paraphrasing, that without external threats, the weak survive and then drag down society. 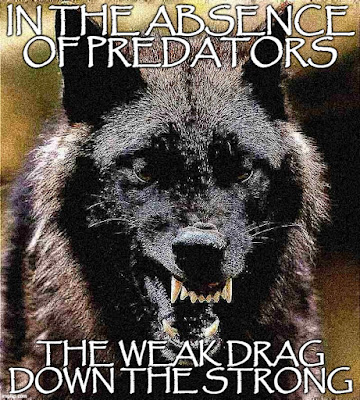 This is on display in spades. Weirdos, freaks and degenerates run our society, everything is centered around trying to placate people who by all rights should be allowed to suffer the consequences of being the weakest link in society. A guy who puts on panties and prances around like that makes him a girl in any normal society in human history has a very short lifespan but in our society we supposed to lift him up and exalt his bravery.
The same is true for "feminism". You can be a strong, powerful wahman who don't need no man....provided that good men provide a security blanket of protection that keeps bad men away from you. Absent that? Good luck with your plan to be an independent woman toughing it out in a man's world.
Without the rule of law that is enforced by men with guns, what would like be like for these single, "independent" feminist women?
They sure as hell wouldn't be wandering around in cities, going to work or clubs or whatever, without a care in the world and wearing provocative outfits. Muggings and rapes would be commonplace. This was on display in Haiti after the earthquake. With no law enforcement mechanism in place, women and young (often very young) girls in refugee camps without a man to protect them were raped at will by gangs of Haitian men. It isn't mentioned much because it runs counter to the narrative but indications are that unprotected women and young girls travelling to the U.S. border with Mexico are raped repeatedly along the way, a kind of cost of doing business with human smugglers.
Being a single woman living on her own, or a lesbian couple playing house or the single mom sort of works now but that is a luxury that isn't going to last. It might take a little longer but soon feminism, transvestitism and other anti-social degeneracies are going to go the way of the RV. We are likely going to see a widespread culling of the weak and the weird on a scale that we haven't seen for generations. Just one more unintended but healthy side-effect of the joint going tits up.
Posted by Arthur Sido at 9:31 AM