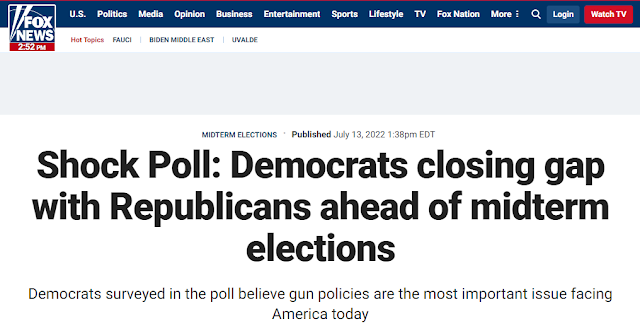 If you are shocked by that poll, you haven't been paying attention.
A new poll has found that Democrats and Republicans are neck and neck in the upcoming midterm elections, with Democrats citing gun violence as their number one concern even as the economy continues to tumble.
The Sienna College Research Institute poll, conducted on behalf of the New York Times between July 5 and 7 among 849 registered voters, found the race to control Congress is tight, with voters preferring Democrats to Republicans by just one percentage point, 41%-40%. Nineteen percent of respondents remain undecided.
However, among likely voters, the Times noted that 44% favored Republicans while 43% expressed support for Democrats in congressional races.
In truth there are just not that many competitive House races nor Senate races. My Congressional seat will go Republican reliably for basically as long as we have elections. The seat held by Alexandria Ocasio-Cortez will do the same for Democrats. Most Senate races are not competitive and the ones that are? They are mostly in formerly "red" states like Georgia where I predict Herschel Walker loses to the incumber Democrat. Solid blue states like California, Massachusetts and New York will never have another competitive Senate race barring some massive shift. The only races that are becoming competitive are in formerly locked down red districts/states.
Polls don't really matter that much, what matters is this:

The people who vote Republican are shrinking as a percentage of the overall population and especially in the younger demographic cohorts where I believe that Whites are already a minority that grows more pronounced as you look at younger age brackets. The Census bureau is super excited to see White genocide unfolding:
2020 Census Illuminates Racial and Ethnic Composition of the Country

Most startling to me, although not surprising, was this tidbit from the report: 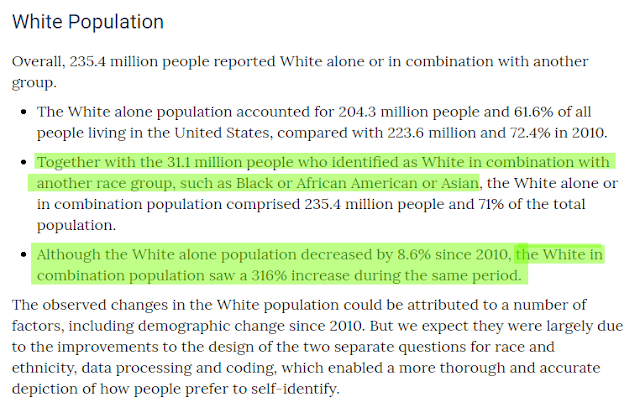 Mixed race, Whites (overwhelming the mother I assume) and some other race, increased by over 300% in just ten years. As a yoof, mixed race kids were very uncommon. Now it is incredibly common to see some morbidly obese White girl, typically covered in tattoos and wearing some awful outfit that might have looked cute on a girl that was 100+ pounds lighter, carrying around one or more little mixed race kids with no sign of baby daddy to be found. According to the Census Bureau there are over 31 million people in America who are of mixed race and while I don't have a ton of experience with mixed race people, I don't know of any that identify themselves as White, they are always (at least mulattos) identified with the other race in the mix. We also know this, people of any race/ethnicity other than White overwhelmingly vote Democrat.
Polls don't matter, race matters, and the racial mix of America has been skewing in favor of the Democrats for decades. That is why I expect that come November this "red wave" is going to be a big ol' nothing-burger. Besides, what will Republicans do if they take control of both chambers? The same nothing they did last time. It might delay some national abortion "rights" legislation or gun control legislation but they won't even try to roll back anything.
The political process is irrevocably broken and the Republic has been shattered far beyond any point since the Civil War. Don't let yourself get caught up in the Our Team v Their Team bullshit this November. Focus on your own situation, your family and your area of operation. Everything else is already lost to us for now.
Posted by Arthur Sido at 10:58 AM