Many Of Us Deserve To Be Replaced

When last we checked in one the beating death of White Ohio teen Ethan Liming, his alleged killers were in custody and to the surprise of no one they were three black adults: Ethan Liming's Killers In Custody
The charges have been filed against these three and again to the surprise of no one they have been given relatively light charges given that they beat an unconscious minor to death. 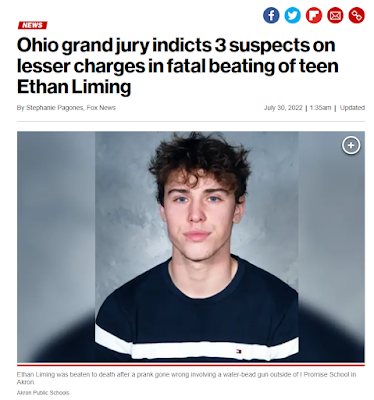 From the New York Post:
A grand jury in Summit County, Ohio, indicted brothers DeShawn and Tyler Stafford, ages 20 and 19, respectively, and their 21-year-old cousin, Donovon Jones, in connection with the early June incident fight that was allegedly started over the use of a water-bead gun.
Court papers from earlier this week show the grand jury indicted DeShawn Stafford on two counts of involuntary manslaughter – felonies in the first and third degree, respectively – and one count each of first-degree assault and fourth-degree aggravated assault.
Tyler Stafford was indicted on single counts of first-degree involuntary manslaughter and first-degree assault, while Jones was indicted on two counts of first-degree assault, records show.
That isn't surprising. Supposedly "new information" was discovered but most likely the "new information" was simply pressure to reduce the charges. Of course there is no mention of hate crime charges. None of that is all that shocking or even really very noteworthy in 2022.
What is infuriating is the response from Ethan Liming's father. I try be sensitive to a parent who has lost a kid but when you are a dumbass like Bill Liming? My patience wears thin quickly.
In a lengthy statement provided by family spokesperson and attorney Michael Callahan, Bill Liming, Ethan’s father, said he and his family “are grieving.”
“We are a beautifully multi-cultural family with white, African American, and Filipino family members who share the vision of strength by coming together rather than pulling apart everything we hold dear at the seams,” he wrote. “Rather than become bitter, we are choosing to fall back on our faith.”
I am sure that having a "beautifully multi-cultural family" was a great comfort to his son Ethan while three black men beat him to death. How is having a mixed race family supposed to be so "beautiful" as if having a different races in your family is automatically an unqualified good, and if we read between the lines is superior to an all White family because heaven will be mixed race or something like that. See, Bill Liming is also known as "Reverend Doctor" Bill Liming. He is a "Dr." thanks to a D. Min degree from Ashland Theological Seminary and is the pastor of Montrose Zion United Methodist Church.

The UMC is a notoriously leftist cucked denomination and Bill's church is no different as most of the staff are homely women with one effeminate looking White guy who is the "worship leader". One of the women on staff, no surprise, is Reverend Bill's current wife, Cyndi Liming, who looks Filipino and is clearly not the mother of Ethan. Ethan's mother is Jennifer Liming and apparently she and the good reverend are divorced. I guess Bill skipped the parts of the Bible dealing with divorce and remarriage, and the qualifications for being an elder/overseer/pastor in the Christian church.
The response of "Rev" Bill to the brutal murder of his son by three black men who likely saw his White son as easy prey is to talk about his beautifully multi-cultural family. Again, these three black men beat his son Ethan unconscious and then continued to beat him while he was unconscious, kicking him in the head.
Affidavits related to the suspects’ arrests, provided to Fox News Digital in June, described how police believed each of the men were involved “in an altercation with Liming” and his three friends. They allegedly “punched” and “assaulted” each of the four victims, and “beat Liming until he was unconscious.” They each “then beat him more” while “he was unconscious on the ground,” the affidavits state.
The affidavits further allege that each of the boys then repeatedly “stomped and kicked Liming” in his head.
Fairly standard behavior in an assault by blacks on someone they outnumber, knock them down and then kick and punch them while they are helpless. The "boys" in question: Deshawn Stafford Jr., 20, Tyler Stafford, 19, and Donovon Jones, 21. If you are 20 or 21 years old, you aren't a "boy" except in the pejorative sense, you are an adult man. Infantilizing them like that makes it seem like teen shenanigans instead of a cold blooded murder of a minor by three adult men.
They get off with "involuntary manslaughter" when they stomped an unconscious minor in the head because that seems like an accident, right? But that's OK because Ethan's extended/step family included blacks and Filipinos.
It isn't just liberal Christians who cuck like this. Uber-"Conservative" theologian and pastor Doug Wilson who is regularly charged with being a Nazi and accused to wanting to reinstitute slavery recently posted Straight from the Pit a long, boring post that ends with this:
I have far more in common with Nigerian Anglican women who love Christ than I do with white conservative American men who don’t. The line is vertical, always vertical. We are Christians.
Really? Want to bet that the Nigerian Anglican woman doesn't feel the same way? Douglas Wilson for all his charges of being a right-wing extremist is just another race cuck who considers non-Christian White conservative Americans, his own people by blood, to be second-class citizens compared to some African woman in Nigeria who happens to share some faint religious connection with a guy named Doug Wilson who lives in Idaho, a state she likely never heard of and couldn't find on a map with both hands.
The number of prominent non-race-cucked White Christians is tiny and the ones that do recognize that they share a familial relationship with other Whites regardless of religious convictions are pariahs in their own religion.
"Reverend Bill" Liming reminds me of another cucked White dad, Rob Tibbetts. Robert Tibbetts is the father of slain White girl Mollie Tibbetts who was brutally murdered by an illegal alien named Cristhian Bahena Rivera because she rebuffed his advances while jogging in Iowa. Rob Tibbetts was hugely concerned that people would think racist thoughts about the illegal alien mestizo who killed his beautiful White daughter. If some mestizo murdered and perhaps sexually assaulted my daughter, the last thing I would worry about would be whether other illegal mestizos in my country got sad feelings.
He infected his daughter Mollie with his liberal White self-hatred. See: Lethal Self-Loathing to learn about Mollie tweeting out "I hate white people" a few months before a non-White stabbed her to death.
On the rare occasions when a White person is responsible for the death of a black, the black's family will pull out all of the stops to frame it as driven by "hate" and "racism" regardless of the circumstances and evidence. They can only think of violent interactions in terms of "racial injustice", their entire existence is framed by loathing and envying White people.
On the far more frequent occasions when a black causes the death of someone White, most Whites will fall all over themselves to make excuses for why it wasn't motivated by race or hate.
Fuck these self-loathing White cucks who excuse assault, rape and murder of our people in the vain hope that people that already hate them for being White might hate them a little less.
Over and over we see the same thing, a White survivor making excuses for the black or mestizo murderer of their loved one in a vain attempt to be seen as not racist. Being not racist is the highest compliment you can give these people and them calling people like me racist is the worst thing they can imagine. That makes it all the more delightful when they call me racist on social media and I just laugh at them. The proper response to being called racist is to say "Thanks for noticing!". 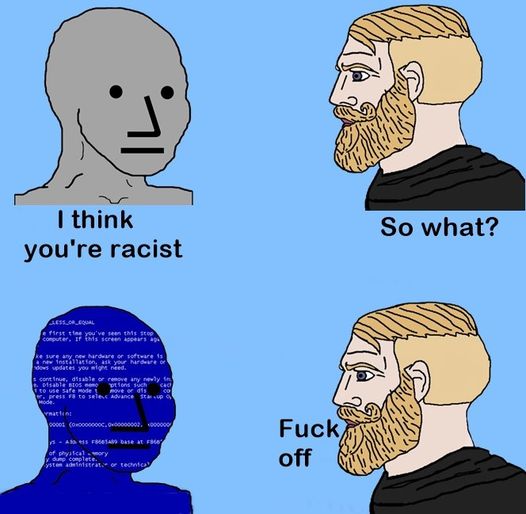 I am rapidly moving past the point of seeing cucked Whites as meatshields (see: About Normie) and into the place where I won't be sad to see them get what they have coming from the feral hordes.
Save who you can, jettison the rest.
Posted by Arthur Sido at 7:53 PM