Let's Check In On Republicucks

You can always count on The Stupid Party™ to be stupid, especially when they have a chance to kneecap The Evil Party™. Let's see what these stalwarts of "conservatism" have brewing.
First let's see what J.D. Vance, author of Hillbilly Elegy and recent winner of the Republican nomination for the U.S. Senate seat in Ohio is up to: 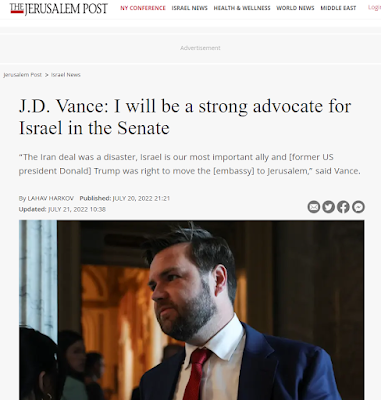 Well that is great news, Israel doesn't have anyone standing up for them in the Congress! Vance of course posted pics of him praying at the "wailing wall" wearing a little hat. 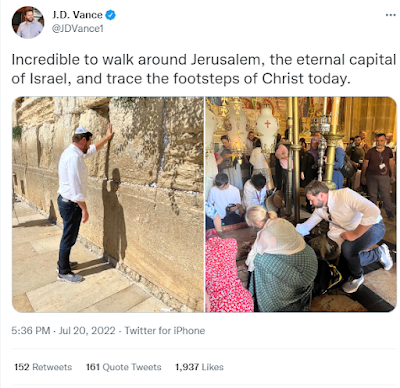 If he is like most Ohio Catholics I know (and I know a lot), he doesn't read his Bible much but maybe someone should point this passage out to him:
"Every man who prays or prophesies with his head covered dishonors his head," -- 1 Corinthians 11:4
Oops.
J.D. Vance is in what promises to be a tough race against Democrat Tim Ryan for the very important Ohio Senate seat so why is he in Israel wearing a silly little hat and pledging to support Israel?
One, because a ton of Ohio evangelical voters have been force-fed dispensational nonsense for decades that tells them that the secular state of Israel formed in 1947 is the successor to the Old Covenant nation of Israel from the Bible. It's not but you can't tell them that.
Second, and more important, you can't be a Republican of any prominence without bending the knee to the Israeli lobby. There is no issue that is more make or break as a Republican than devotion to giving Israel whatever it demands, even though Jews vote overwhelmingly for Democrats, always have and always will. Not abortion, not guns. If you don't swear fealty to Israel, you are done.
Speaking of "conserving". In the wake of the overturning of Roe v Wade, it was noted by many people including Justice Clarence Thomas, that the same reasoning that created a "right" to an abortion also was used to create a "right" to gay "marriage" via Obergefell v Hodges. So of course a number of Republicans are on board with a law to pre-emptively make gay "marriage" permanent, like this dipshit: 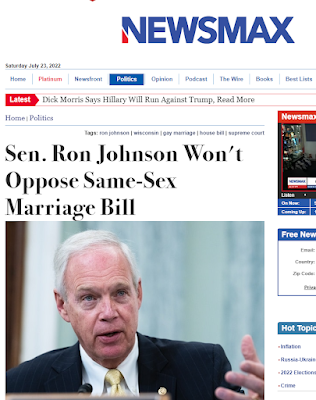 Ron Johnson, Republican from Wisconsin, looks as inspiring and as intelligent as a cup of flour. He isn't alone according to the article:
"Unlike Roe v. Wade, I do not see any scenario in which the Supreme Court would overturn Obergefell. The Respect for Marriage Act is another example of Democrats creating a state of fear over an issue in order to further divide Americans for their political benefit. Even though I feel the Respect for Marriage Act is unnecessary, should it come before the Senate, I see no reason to oppose it," the full statement read.
He isn't the only Republican lawmaker who would codify same-sex marriage into federal law. A total of 47 of them voted in favor of the Respect for Marriage Act in the House on Tuesday, including House GOP Conference Chair Elise Stefanik of New York.
Stefanik is someone you likely never heard of but she is the chair of House Republican Conference, making her "the third-ranking House Republican". This is what you are going to see more of in the future, Stefanik is only 38 and is the epitome of the Republicuck mentality.
Be sure to show up to vote in November, how else can you be sure that gay "marriage" will remain the law of the land and Israel will continue to steal from the American tax payers in perpetuity?!
Posted by Arthur Sido at 7:39 PM