A bit of 2A news that made the rounds yesterday.
VIDEO: ATF conducts surprise firearm inspection at man’s home without search warrant
The basic gist of the story is that a man in Delaware had three LEOs (two ATF, one Delaware state cop) show up unannounced at his home who then badgered him into showing them some of his firearms. No warrant was obtained. They claimed they were checking to make sure he still had his firearms as part of a crackdown on "straw purchases", he had purchased multiple handguns and shown up on a report. You can see in the article and in the below video that the guy lives in what appears to be a nice residential neighborhood, has a lovely front porch and a well maintained front lawn. Not exactly where you would do a spot check for a straw purchase.
Notice also that they are wearing tactical vests and are spread out on the lawn, being as conspicuous as possible. The guy finally agreed to show them a firearm, they wrote down the serial number and left. The guy who broke the story, Lee Williams, did a follow-up because the ATF is getting some heat on this: ATF issues conflicting responses to story about warrantless firearm inspection
His final words are worth noting:
It should come as no surprise that this encounter came just a few days after ATF’s new director, Steve Dettelbach, was sworn in. Dettelbach is notoriously anti-gun. When he ran unsuccessfully for Ohio Attorney General in 2018, he was endorsed by Barack Obama, Joe Biden and Everytown for Gun Safety. During his campaign for AG, Dettelbach called for reinstating the failed federal “assault weapon” ban and for universal background checks.
These warrantless home intrusions make it crystal clear where the new director is taking the agency. Under Dettelbach, the ATF is ready, willing and able to serve on the front lines of Joe Biden’s war on our guns.
Dettelbach is going to be a problem and that has been clear. This is why I warned that defeating the nomination of David Chipman to head the ATF was not a real victory of any sort: Hooray We Won....Nothing
A few of take-ways from this:
One, by law FFLs like me are required to file a report whenever a customer purchases more than one handgun from us within a five consecutive business day period. This is the actual wording:

Federal Firearms Licensees (FFLs) must use this form to report all transactions in which an unlicensed person (i.e., non-FFL holder) acquired any combination of two or more pistols or revolvers totaling two or more at one time or during five consecutive business days.

That means someone buying two pistols on a single day or someone who buys a pistol on Tuesday and then another on the following Monday.
Two, this report must be filed within 24 hours by the FFL to the ATF and also a copy is sent to your local Chief Local Law Enforcement Official (CLEO). In my case because we live in the sticks that is our county sheriff but in cities it would probably be the chief of police of that city. I assume my sheriff has a file somewhere where these are kept and never looked at. This is the only occasion when your firearm purchases are reported directly to local law enforcement.
Third, it is also the only time that your information is specifically sent to the ATF when you purchase a firearm. Normally you fill out a form 4473 but that document stays in the possession of your FFL unless something happens involving that firearm. The FBI runs the NCIS background check system but that doesn't tell much other than you had a check run and as far as I know it isn't reported to the ATF.
Fourth, look at the form: 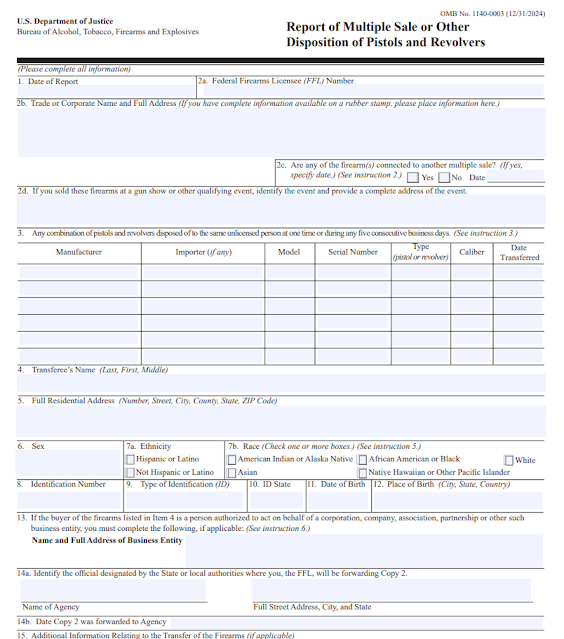 The form not only has your personal information, it also includes the exact type and number of firearms you purchased including the serial number. As I said this form goes to the ATF and to local law enforcement and I assume is compiled on the Fed's end in some sort of database.
Fifth, if they don't have a warrant you don't have to show them anything. It is not illegal to purchase more than one handgun, and you are under no obligation to provide your firearms for inspection on what amounts to a fishing expedition. You should cooperate as legally required with law enforcement but that doesn't obligate you to allow them to inspect your legally purchased firearms. I would never allow law enforcement access to my home or person without a warrant.
Sixth, be smart. If you are buying a lot of guns from dealers and then turning around and selling them privately right away, you are running the risk of being considered an unlicensed dealer. Right or wrong, if you are engaged in buying and selling firearms for a profit that makes you a firearms dealer and if you don't have an FFL you can get busted. Whether I agree with that or not is irrelevant, just know that you can run afoul of the Feds if you are engaged in buying and selling without a license.
Owning, buying, selling guns is going to get a lot more problematic in the very near future. Take advantage of the fact that right now you can buy pretty much anything you want, anytime you want. That state of grace won't last much longer I'm afraid.
Posted by Arthur Sido at 10:53 AM