It Really Was A Bioweapon

Tucker does a pretty good job of laying out the facts about the Covid-19/Wuhan Flu/Chinese Coronavirus pandemic, where it came from, who profited by it and how the media dances to whatever tune the Chinese government tells them.
Our own "intelligence" services at first suggested it was possible, and then came out and said it was near certain, that the Chinese coronavirus came from the lab in Wuhan and was manmade. 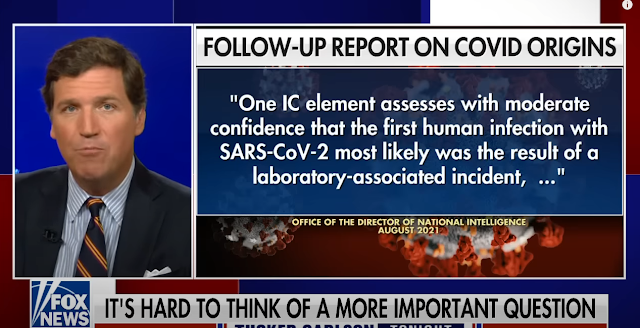 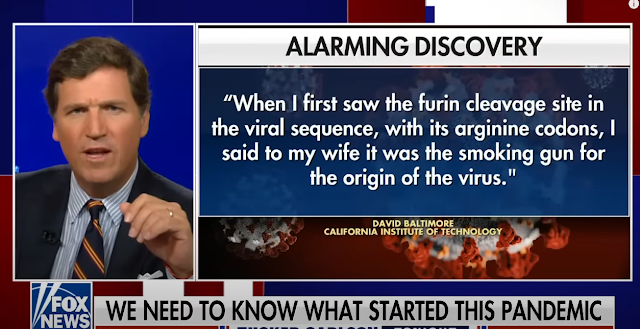 For his faults, and they are many, no other voice with this much of a reach is talking about this stuff.
Before the information controllers got a death grip on the narrative, people were starting to suspect this but now? It was absolutely forbidden to even bring this up on social media. You would at best get "fact checks" all over your post and often had material censored and accounts banned.
As it turns out, as is so often the case, the "conspiracy theories" were simply people telling the truth before it was allowed.
The coronavirus is a damn bioweapon that got loose or was set loose and helped to contribute to a whole bunch of shit. Like this. 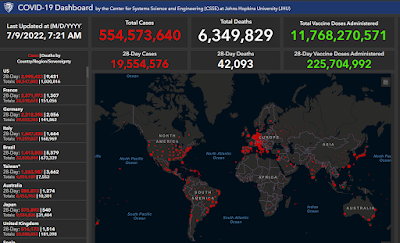 I like that the total number of "vaccine" jabs is in bright green while deaths are in white because getting more people vaccinated is kind of the point but not for any nefarious reasons of course. Over 6.3 million people died of/with coronavirus. That is more than Moustache Man Bad is blamed for. Also notice where the red dots are most concentrated and where they are not.
Economies wrecked, millions killed, hundreds of millions had their lives upturned. Still our "leaders" seem incredibly incurious about where this thing came from. Almost like they are all on the payroll of the same state sponsor responsible for creating this viral bioweapon in the first place.
The worst is yet to come. Our self-appointed elites have been showing their hand and still most people refuse to listen to talk about the next "pandemic", or global food crisis and famine, out of control inflation, endemic urban violence. Whether they realize it or not, it is coming. Only by reducing the world's population, specifically the people who might cause a fuss (ex. you), can they move forward with their goals and if that means that the Great Reset leads to genocide? Well you can't make an omelet without breaking a few (billion) eggs. You will own nothing but probably won't be happy, you'll be dead.

With millions already dead and hundreds of millions or even billions in the crosshairs to join them, these people are going to make the worst mass murderers in history look like pikers. (See: Globalists have entered the kill phase of Great Reset; Remember the Deagel population forecast? It now makes total sense)
The Chinese coronavirus was just the opening salvo. While tens of thousands have died in the last month even 2 1/2 years after the "pandemic" struck, what we don't have a good handle on is how many additional deaths are occurring that are directly related to or caused by the "vaccine". They are suppressing that information with all of their might, which tells you an awful lot. Why else are we making up bullshit like SADS or "Sudden Adult Death Syndrome" to explain why healthy young people are suddenly dropping dead For No Reason Whatsoever (See: The Latest Tragedy: Sudden Adult Death Syndrome).
We are entering a massive reordering of the global order with China poised to be the dominant force in the world, a Communist-Capitalist fusion without any of the lingering Western notions of morality to get in the way. The Chinese model is the future they want for the survivors, a small aristocracy that is unimaginably wealthy, completely unaccountable and possessing limitless power sitting atop a mandarin class of technocrats who keep the wheels turning, all of that over a teeming mass of people who live in abject poverty kept in line by the threat of concentration camps and summary executions. If you aren't already one of the elites or their cronies, you are destined for the perpetual underclass if you are lucky and more likely a mass grave if you are not.
The only potential rival to China is a massive nation just to their West with enormous reserves of critical natural resources and one that is largely free from the globohomo agenda: Russia. Starting to see what the attempts to isolate Russia and even trigger a crippling war with the West is all about? Hint: it is not about "freedom" or "democracy".
We are not at the end of the "pandemic", we are merely at the end of the opening gambit of a much larger scheme. What is coming next will make you look back with fond nostalgia at the good old days of 2020-2021 when all we had to worry about were some lockdowns and mask mandates.
Posted by Arthur Sido at 9:53 AM