How Could This Have Been Avoided?

Ah, race riots in our cities. We've missed you but thanks to a dumbass good boy turning his life around named Jayland Walker we have a fresh shitshow in the already dumpy city of Akron, Ohio.
When last we visited Akron, we talked about the brutal murder of a 17 year old White boy named Ethan Liming (See: The Death Toll Keeps Climbing and Ethan Liming's Killers In Custody) by three vibrantly diverse fellas named Deshawn Stafford Jr., Tyler Stafford, and Donovon Jones. 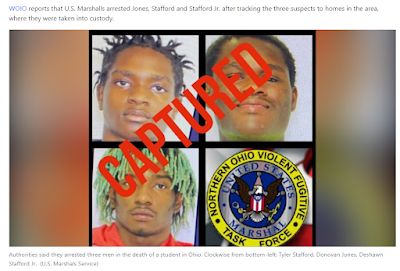 Pretty much no one gave a shit that a White kid was brutally beaten to death by three adult blacks who kept beating him when he clearly was unable to fight back, kicking him so mercilessly that he had "footprints on his chest wall". If you are doing something dumb, and I am not sure he even was, you might deserve a little ass-kicking to teach you a lesson but that is a far cry from three adult men kicking a 17 year old when he was on the ground and helpless. There is barely any coverage of this nationally apart from some stories on Fox News and the New York Post.
A few weeks back, Michael Shearer, the editor of the local Akron paper, the Akron Beacon Journal, ran an editorial that was published in the Columbus Dispatch: Why the Beacon Journal no longer publishes arrest photos. According to Mr. Shearer (you can email him here: mshearer@thebeaconjournal.com ), this was to avoid:
...contributing to an outsized sense of crime in the community by reporting on too many minor incidents reported by local police through their narratives.
I call bullshit. They stopped publishing mugshots for one reason and one reason only: the mugshots almost always showed black and brown suspects. Everyone knew that this incident would lead to blacks getting arrested and as always we were correct.
Back to Jayland Walker. Mr. Walker was in a car that committed a traffic violation and the police tried to pull the vehicle over. The driver of the vehicle refused to stop and at one point a shot was fired from the car Mr. Walker was in at the pursuing police. When the vehicle finally stopped, Mr. Walker bolted from the car and took off running. While we are assured he was a good boy, very sweet, etc. Mr. Walker was for some reason (in late June) wearing a ski mask in the car. 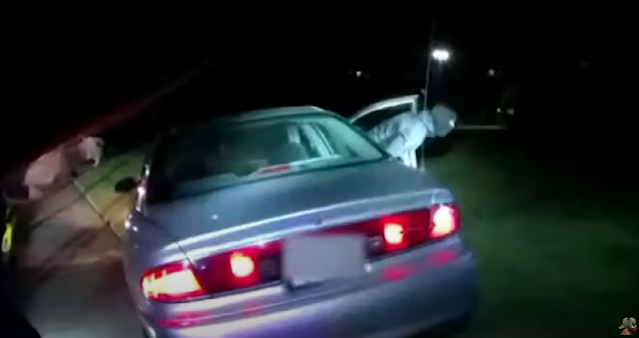 Police attempted to use tasers to stop him, unsuccessfully, and then during the foot pursuit Mr. Walker apparently turned toward the cops and reached for his waist. The cops replied with a flurry of shots, striking Mr. Walker 60 times. Needless to say, he didn't survive.
The police department released the bodycam video yesterday and of course the usual suspects screamed "RACISM!". Protests turned predictably violent last night in Akron, leading to a curfew and cancellation of the city fireworks. Strangely the area under curfew has a street named after "Dr." Martin Luther King as one of the boundaries. 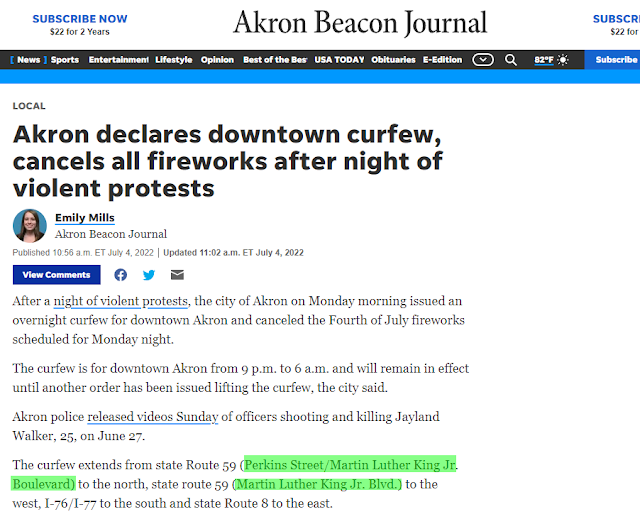 Donut Operator did a breakdown video and it shows in real time how chaotic this whole scene was.
Late at night, in a foot pursuit following a car chase, pursuing a suspect who might have been the one taking a shot at you just a few moments earlier. He refuses to stop and reaches for his waist. The result was predictable.
Far be it from me to reflexively defend the police. The guy was, at the time he was shot, unarmed but the police had no way to know that and shots had already been fired. It won't matter what the extenuating circumstances are, the black community agitated by White leftists and black clergy, will demand "justice" because no black man has ever done anything deserving of getting shot by the po-leece.
That brings me to the main point. How could this have been avoided? What steps could Jayland Walker have taken that would have ensured he was still alive to have a burger on the 4th?
They are myriad. Don't be riding around in a car up to no good. Tell the driver to pull over when the cops hit the lights. Don't shoot at the cops from the vehicle. Don't flee from the car. Comply with police orders to stop. Had he done these things, he would be alive today. Maybe in a cell but alive. Chris Rock explained this back in the day: How To Not Get Your Ass Kicked By The Police
You have to watch it on Youtube because it is "age restricted". His advice: obey the law, use common sense, stay in your car, shut the fuck up and don't drive with an angry woman. Had Jayland Walker watched and heeded Chris Rock's video, he would be alive today. Again, maybe in a cell but alive to face trial. But he didn't, he instead made a series of poor decisions starting with getting in that car wearing a ski mask and carrying a gun that led to him being riddled with bullets.
I expect the police will get off on this one, all of the surrounding circumstances leading up to the shooting paint a picture of a man who was asking to get shot and ended up.....getting shot. The fact that he was shot 60 times isn't really relevant other than for shock value and to get people riled up. One round in a critical area will kill you, the other 59 just made sure.
We will see what the local prosecutors do and then more importantly we will see what Merrick Garland's "Justice" Department does because I wouldn't be surprised to see them bring these officers up on charges of "civil rights violations". It very much becomes a double jeopardy situation as you can be charged for the same "crime" twice but no one seems to be concerned with pointing this out.
Ultimately the one person who is 100% responsible for the death of Jayland Walker is Jayland Walker. This being 2022, blacks can't be expected to take any responsibility for their own actions so it is likely we will see more violence and destruction taking place in Akron today and for who knows how long.
Obey the law, don't be a dumbass. That isn't a very high bar to avoid being shot by the police but it apparently is still too high for all too many blacks.
Posted by Arthur Sido at 12:17 PM