In his 1964 acceptance speech at the Republican Convention where he had been nominated to run against Lyndon Johnson, Barry Goldwater famously said:
I would remind you that extremism in the defense of liberty is no vice. And let me remind you also that moderation in the pursuit of justice is no virtue. 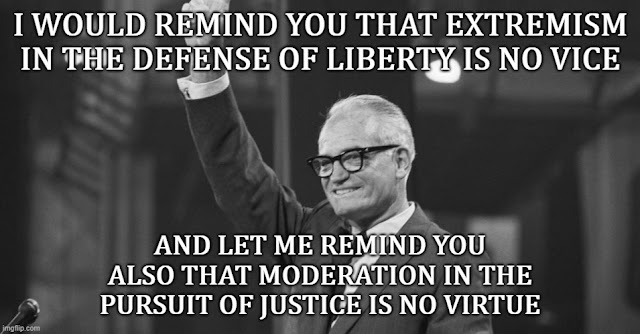 Great words although Goldwater would be blown out by LBJ 486 electoral votes to 52, facing as he did an impossible task of overcoming the national grief over the assassination of JFK and being stabbed in the back by his own party (a recurring theme in the GOP).
Many of the things said about Goldwater were also said about Ronald Reagan but by that time it stopped working, the disastrous incompetence of Carter made him the anti-LBJ with nothing to run on. Reagan was bold and brash compared to other Republicans and he won both elections handily. He was also the last really strong Republican candidate for decades to come. George H.W. Bush, Dole, Shrub W. Bush, McCain, Romney? What a pack of limp noodle pussies. It is a small miracle that Shrub won his first election, he won the second by virtue of riding that "War On Terror" bullshit but he would have been clobbered if he was able to run a third time.
Republican "leadership" from the top down has been lackluster, milquetoast, uninspiring wimps for as long as I can remember. Would you follow "Cocaine Mitch" McConnell anywhere? Or House Minority Leader Kevin McCarthy who is so useless I had to look him up because I for the life of me couldn't remember his name? McCarthy is one of many political figures who has never had a real job of any sort in his life, I need to do a post about that one of these days.
In fact Republican "thinkers" and "strategists" have been counseling moderation for as long as I can remember and to the surprise of absolutely no one this strategy has led to a series of pussies running the show for the GOP. I still remember the VP "debate" between Sniffy Joe Biden and Paul Ryan. Biden ran all over Ryan, insulting him and talking over him while Ryan just smiled and took it. You see where taking the "high ground" has gotten the GOP. Principled loss after principled loss for years on end, until Trump got the nomination and all of the same people preaching moderation flipped out and told conservatives why they couldn't support Orange Man Bad. The same NeverTrumpers who now are crowing about "their" victory over Roe v Wade.
What got me thinking about this was the Zman's latest podcast, An Angry Return. His first segment was about dimwit Kevin Williamson of National Review fame talking about the triumph of moderation over fanaticism.
Listen to "EP 237 An Angry Returm" on Spreaker.
As Z pointed out, the Left has been consistently winning precisely because they appeal to their most fanatical zealots.
It isn't a big leap to say that the "right" has the better arguments on virtually every topic. Libertarians can argue all day long in favor of all sorts of stuff but it generally falls on deaf ears. The right doesn't lose because their arguments need to be a little better, they lose because they don't appeal to people where it matters: their emotions. 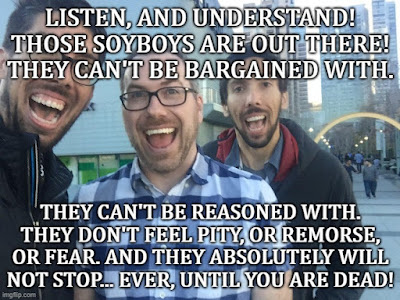 Let's look at the two recent wins for the "right" in America:
- The Dobbs v. Jackson Women's Health Organization case that overturned Roe and the "right" to an abortion
- The NYSRPA v Bruen case that set the precedent for a right to carry a firearm outside of your home
It is hard to express as someone who has lived for 50 years under legalized abortion and the endless infringements on the Second Amendment how earthshaking those two decisions are. They will likely be temporary wins but after decades of no wins, it is incredible to see Roe go down in flames and the SCOTUS repeatedly affirming the individual right to keep and bear arms.
Why did those two issues win when so many other "conservative" issues have been steamrolled over the years?
Quite simply, they were based on emotional arguments made by absolute fanatics.
The arguments for banning abortion cover a lot of ground but ultimately it comes down to this:
Abortion is murdering a baby.
That's it. That's the argument. An unborn child is still a child, abortion kills that child. Therefore abortion is murder, straight up infanticide. Every argument against abortion centers around the fact that an abortion kills an unborn child.
Gun rights? Just as simple, just as emotional. Said nowhere better than from Charlton Heston: 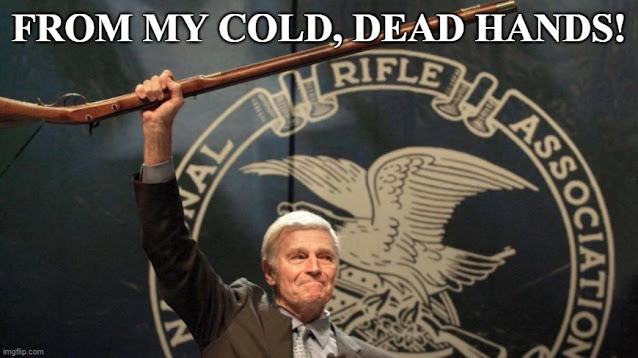 The rest of the saying is well known:
You can have my gun when you pry it from my cold, dead hands.
That fit nicely on a bumper sticker and it captures the spirit. I am not giving up my guns. Not ever. It isn't a nuanced position. It says something quite plain: if you try to take my guns, I'll shoot you.
It is simple, it is emotional. American gun owners, tens of millions of us, have a very deeply personal relationship to our firearms. To allow myself to be disarmed is to be made into a slave, subject to the whim of my masters in D.C.. No. Fuck you, no.
For decades pro-life and pro-2A zealots have fought tooth and nail for their causes. They never wavered, they never gave up. In the end they won these victories not because they made the better argument to the rest of the American people but because they refused to back down. They won, and I count myself among them on both issues, thanks to a loudmouth lifelong Democrat appointing people to the Supreme Court that he knew would vote to overturn Roe and to support the 2A.
In the end it wasn't the better argument, it was the zealous refusal by my people to let go of these issues even when it seemed like they would never win. In short it was emotional.
Obama was the master of this. Remember his speech when he clinched the nomination?

The journey will be difficult. The road will be long. I face this challenge with profound humility, and knowledge of my own limitations. But I also face it with limitless faith in the capacity of the American people. Because if we are willing to work for it, and fight for it, and believe in it, then I am absolutely certain that generations from now, we will be able to look back and tell our children that this was the moment when we began to provide care for the sick and good jobs to the jobless; this was the moment when the rise of the oceans began to slow and our planet began to heal; this was the moment when we ended a war and secured our nation and restored our image as the last, best hope on Earth.

Messianic complex anyone? But it worked because it played on the emotions of liberals and guilty White normies. He won because they played the emotions of the average American who were willing to support a far left imbecile because voting for Obama made them have good feelz.
Many of us don't like this truth. We prefer to be intellectuals who argue people into submission to show off our big brains. But for all of our big brain arguments, we are on the precipice of destruction. "Conservatives" keep winning the arguments but lost the war because the "leaders" of conservatism have driven out those they see as "too extreme", from Barry Goldwater to Pat Buchanan. The movement that was left over was sterile, mainly a vanity project for pseudo-intellectuals like William F. Buckley and George Will. Any hint of emotion or zealotry was stamped out as unseemly. Conservative voters were told to shut up and keep voting for globalist capitalism with the vague promise of getting around to abortion and gun rights at some point in the future, a promise delivered with a smirk.
Well their time is over. The days of National Review and Heritage and the American Enterprise Institute, all of the "conservative" grifters is over. Our day is coming. Most of the Normies will just go where they are told. Many are ready for something new, and we must be there to provide some of them with a new path.
The future will belong to whichever group of radical zealots, extremist fanatics win.
If our extremism doesn't match theirs, we will lose.
Posted by Arthur Sido at 8:14 PM