Big Pharma Is Murdering Us

Sounds like a conspiracy theory? Not so fast. I hesitate to use hyperbolic language about a TV talking head but this might be the most important segment Tucker Carlson has ever done and I am shocked they let him put it on the air.
(Video embedding isn't working but the video is at this link --->>>) Here is the transcript if you prefer reading: Tucker Carlson: Drugs are not the answer to every human problem
I am the son of a physician and the father of a soon-to-be physician. I believe in the medical field.
Having said that there is an enormous and growing chasm between the practice of medicine and the "health care" industry. I have seen this up close watching our daughter apply to medical school and as a patient and the husband/father of other patients. It is bad and it is getting worse. You should read if you have not this from Henry Schumacher on Substack: Don't get sick, and you should subscribe to his Substack feed for an inside view of the medical system. His closing paragraph echoes what I have been saying:
Your health care system, like the greater economy around it, is in freefall, stumbling and careening toward collapse. Please, avoid interacting with it unless absolutely necessary. Your life and the lives of your tribe may depend upon it. If you have to break down and go seek care, look for some gray hair……
Find a middle aged White male doctor now if you don't have one. What is coming out of the medical schools now and in recent years is a disaster waiting to happen.
Back to my point. I think I have shared this before but it is applicable again. My father (now retired) was a family physician in our small town of Waterville, Ohio. Early in his practice he even delivered babies. He cared for children, teens, adults and the elderly. His practice was him and another doctor. They had a handful of women in the office, a nurse and a couple of women to handle the front desk and paperwork. This is his office building now, a very small little brick building with room for a waiting room, some exam rooms and the back office area. 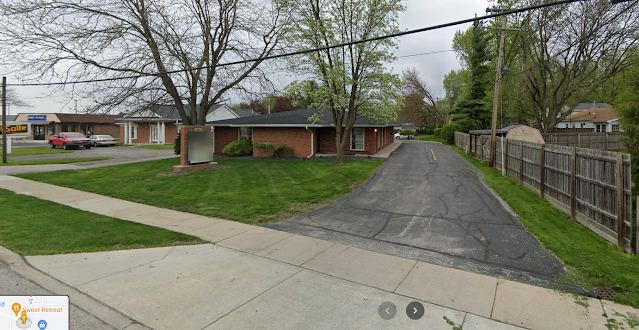 This is where the practice moved to right before he retired after he grew sick of dealing with the insurance companies.

Modern and much larger, with a large staff of non-medical personnel and of course now owned by McLaren, a huge "health care" system with a $6,000,000,000 budget.... 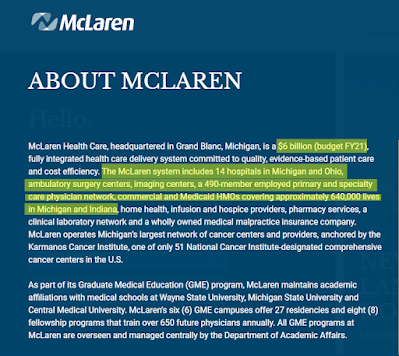 Do you think your care was better when you had a small town doctor who owned the practice or when a faceless multi-billion dollar health care system owns the practice?
Anyway back to Tucker's video.
While the number of life saving and life improving drugs is almost uncountable, some of the biggest drugs on the market are not only not savings lives or improving them but are instead making lives worse and even killing people in genocidal numbers.
Tucker started off with the opioid epidemic, created in large part by Purdue Pharmaceutical run by the Sackler family, a Jewish criminal syndicate that managed to make billions while murdering hundreds of thousands of White Americans and got away with it without anyone ending up in jail.
He also talked about the "vaccines" for Covid, including the admission from Deborah Birx that the vaccines were bullshit:
"I knew these vaccines were not going to protect against infection and I think we overplayed the vaccines ..."
For more see: Deborah Birx just admitted that she knew the vaccines were not going to stop the virus from spreading but suffice it to say that she came out and said what many of us knew, that the "vaccines" were not very effective and the risk was only offset for people who were in increased danger of Covid (iow the elderly). The admission from Birx ought to be bombshell news but most people didn't hear it.
Finally he gets to the big one, that antidepressant meds are based on faulty science. This is a good overview of the issue: 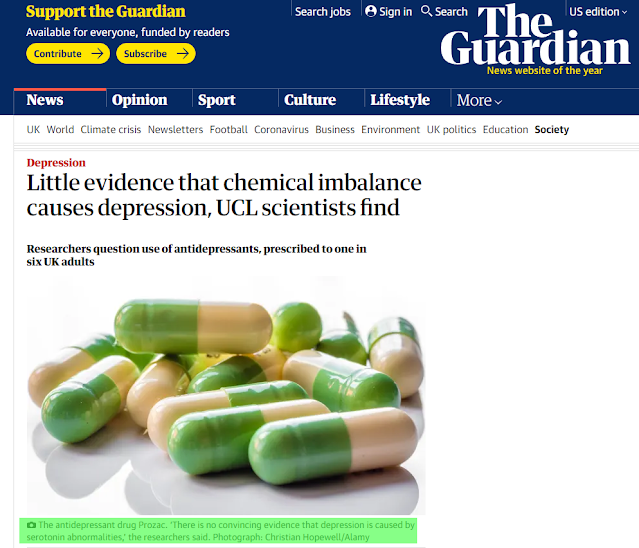 Little evidence that chemical imbalance causes depression, UCL scientists find
“Many people take antidepressants because they have been led to believe their depression has a biochemical cause, but this new research suggests this belief is not grounded in evidence,” said the study’s lead author, Joanna Moncrieff, a professor of psychiatry at University College London and consultant psychiatrist at North East London NHS foundation trust.
“It is always difficult to prove a negative, but I think we can safely say that after a vast amount of research conducted over several decades, there is no convincing evidence that depression is caused by serotonin abnormalities, particularly by lower levels or reduced activity of serotonin.
“Thousands of people suffer from side-effects of antidepressants, including the severe withdrawal effects that can occur when people try to stop them, yet prescription rates continue to rise. We believe this situation has been driven partly by the false belief that depression is due to a chemical imbalance. It is high time to inform the public that this belief is not grounded in science.”
WTF. The market for antidepressant meds is billions of dollars and the basic premise is completely off? That might explain as Tucker mentions why while the number of prescriptions for antidepressants is up thousands of percent, suicides are also up 35% and people in general are more miserable than any time in living memory. If antidepressants worked and over 200 million are prescribed, we should be the happiest country on earth. Instead we are the opposite. Maybe the problem isn't one that can be solved by numbing people's minds so they don't notice how shitty they feel?
The American people are simultaneously the most unhappy and the most heavily medicated of any people who have ever existed.
If prior generations of Americans had been this heavily sedated all the time, we never would have made it across the continent, or split the atom, or landed men on the moon.
I know of people who have been helped by these meds, people suffering significant psychological issues. For most people, their issues are not biochemical but something else. Cognitive dissonance, endless bad news being streamed 24-7, the constant din of social media blaring in their eyes and ears and the world we live in just being jacked up in general have more to do with mental health problems than an issue with brain chemicals.
What is the greater problem is that the pharma companies must have known this, if not at first then eventually, but they still keep pushing these pills and doctors still keep prescribing them in enormous numbers. Instead of telling their patients complaining of depression and anxiety to put down their phone and go outside for a bit, many docs just prescribe a pill and send the patient on their way. That isn't medicine really, it is more akin to slapping a patch on a leaky rubber raft even though you know it will spring a new leak soon after.
Big Pharma is even worse, they don't even care if people get better as long as the bucks keep rolling in. Why do you think they were given that blanket immunity from lawsuits over the Covid "vaccines"? There was a demand for a vaccine, whether it worked or not, so they made something and the government bought it up by the hundreds of millions of doses.
The same outfits that are responsible for so many life-saving drugs are at the same time making poisons that are killing people by the hundreds of thousands. Something isn't working here and all of the screeching about "muh free marketz!" doesn't change that.
We need to refocus ourselves on real medicine and distance ourselves from the "health care" industrial complex.
Posted by Arthur Sido at 12:22 PM