A Little More Freedom In The Hoosier State

July 1st means that permitless carry/Constitutional carry or whatever you call it is now legal in Indiana. Thanks for letting us exercise our rights without getting permission!

Of course many people are just terrified. Honestly I expected that everyone in Indiana would have been shot to death by sunrise based on the hysterical comments on social media about "The wild west" and "gunfights in Walmart". Check out this story from the Indianapolis Star: 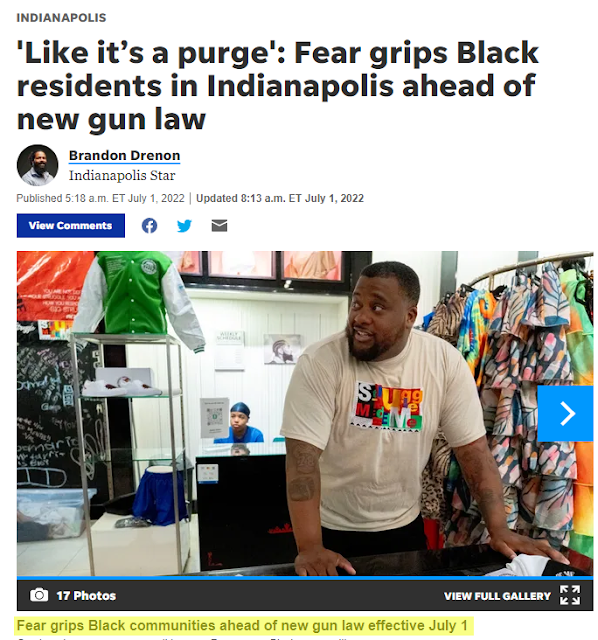 IT'S LIKE A LITERAL PURGE!
Geezus, try to not act like a scared little bitch for one second. When you read the story you see this:
After record-breaking homicide years in Indianapolis in 2020 and 2021, overwhelmingly endured by Black neighborhoods, Indiana state legislators voted in March to pass a bill easing gun control restrictions.
We already had record-breaking homicide two years running before this bill became law. Obviously the blacks weren't paying attention to the rule requiring a permit to carry a handgun. The story spins something else:
When the city counted its 100th homicide in June, 81% were a result of gunshots, according to Indianapolis Metropolitan Police data, and 74% of those killed were black. This tracks with data from 2020, where 183 black victims accounted for 74.69% of total homicides.
Not mentioned in talking about the "victims": who killed them because I would bet that virtually all of them were killed by other blacks.
I liked the quote from my State Representative, Ben Smaltz, in the story:
"(The law) simply allows law-abiding Hoosiers who are legally allowed to possess a handgun to carry without a government-issued permit," Smaltz said in an emailed statement. "Previously, the state issued permits to anyone who was eligible and applied, but could include long delays. I strongly believe that lawful citizens should be able to use their constitutional right to self-defense, because criminals are not waiting on a government permit."
Indiana already has a ton of people with carry permits and very few of those with permits were committing homicides while most of the homicides appear to be committed by people already prohibited from even possessing a handgun. In other words, the impact of this law will be negligible at worst.
More silliness but you can be sure that each and every black on black murder going forward will be blamed on Constitutional carry even when the shooter invariably isn't legally permitted to carry even under the new law. As for me, I will take another small "W" in the fight against the neo-Bolsheviks.
FREEDOM!
Posted by Arthur Sido at 10:26 AM