Various gun control* measures are working their way through Congress right now. They will likely pass the House with no problem but then run into the filibuster in the Senate where, as of now, there are not enough Republican votes to break the 60 vote threshold and make it to an up or down floor vote. Gun control is a major focus for the Left and the outrage over Buffalo and Uvalde is already starting to cool off in a hurry so they are left with three options:
1. Wait until another mass shooter that definitely is not already known to and being encouraged by the Feds to commit a false flag and then try legislation again.
2. Trigger a sleeper shooter to strike now while Uvalde and Buffalo are still fresh in people's minds and hope that gets them enough votes.
3. Bust the filibuster and hope they retain control of the House and Senate, an iffy proposal given the political climate. Allowing SCOTUS Justices to be confirmed by a simple majority under Harry Reid bit them in the ass when Trump was able to get Kavanaugh, Gorsuch and Barrett on the SCOTUS for life.
Number two is unfortunately the most likely in my opinion, meaning a bunch of innocent people are going to get capped so the Dems can roll around in their blood like pigs in shit before pushing for more gun control, and enough Republicans will do what they want to do anyway, vote to disarm Americans. We will see what happens but it won't be good.
That doesn't mean the Left can't try to restrict guns by various other nefarious means. One likely tactic is scaring the big players in the firearms business out of the AR-15 market. This is attempt is already underway.
Chairwoman Maloney Launches Investigation Into Manufacturers of Assault Weapons Used in Mass Shootings
Rep. Carolyn B. Maloney, Chairwoman of the Committee on Oversight and Reform, sent letters to gun manufacturers Bushmaster Firearms Industries, Inc., Daniel Defense, LLC, Sig Sauer, Inc., Smith & Wesson Brands, Inc., and Sturm, Ruger & Company, Inc., requesting information regarding their manufacture, marketing, and sales of firearms used in mass shootings, ahead of the Committee’s upcoming hearing on gun violence on June 8, 2022.
Daniel Defense was singled out because the AR used in Uvalde was a very expensive Daniel Defense rifle, and Bushmaster was targeted because the Buffalo shooter used one of their rifles. I read over the letter sent to Daniel Defense, dated May 26th, demanding a response to a litany of questions by June 2nd. May 26th was the Thursday before Memorial Day weekend so assuming it was actually delivered even on that date via email, that means they would have four whole business days to respond to her request. The questions they are supposed to answer include a ton of information (click to enhance): 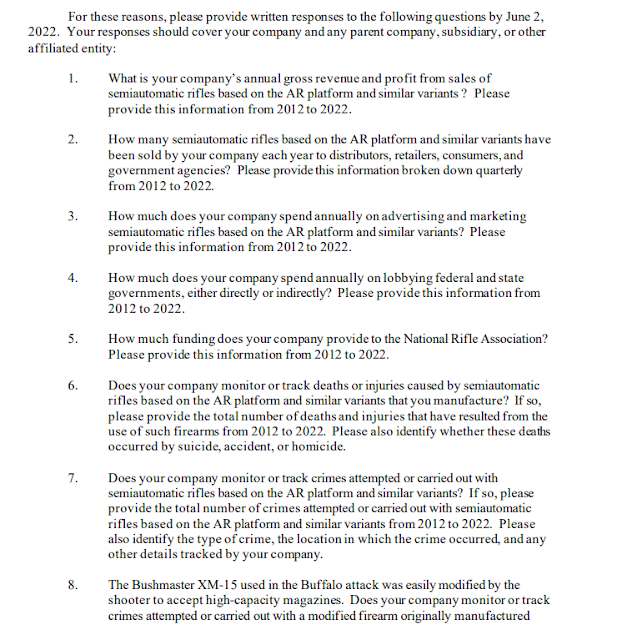 They also demanded by June 6th, next Monday, this nonsense:

All marketing materials for a period of five years? And they are supposed to respond within a week which includes a holiday weekend? I hope Daniel Defense sent them a letter telling Carolyn B. Maloney to go fuck herself sideway with a rusty shovel. This hideous old bat is Carolyn Maloney, a 76 year old twat. Even with the caked on make-up, plastic surgery and photoshopping she still looks like a dollar store Nancy Pelosi. 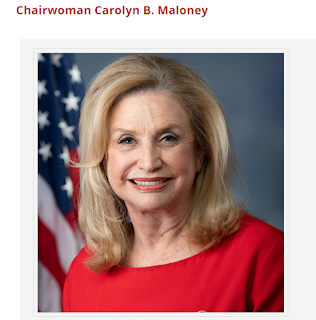 What the hell is up with that enormous vein in her forehead?

They couldn't airbrush that out? A more significant question, why is someone like this old bitch allowed to bark at decent people? Oh, because she is the chair of the House of Representatives "Committee on Oversight and Reform", which you probably haven't heard of but it wields enormous power. As it states on their website: 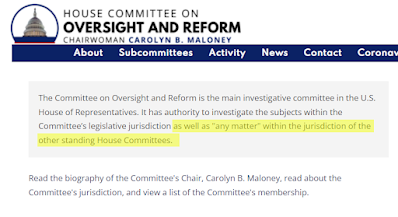 It isn't an egomaniacal move to plaster her name right below the name of the committee on top of the website. Apparently they all slap their names on the committee website if they are the chair just to show how awesome they are. Look at the pic of the horror show running the incredibly powerful House Appropriations committee, 79 year old Rosa DeLauro. 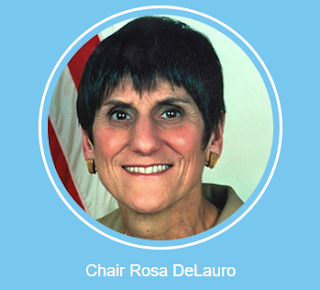 That picture was probably taken many years ago and her photo on Wikipedia is even more horrifying. 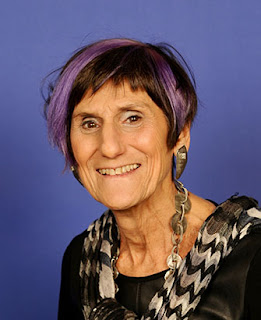 That is a face that makes you want to weep and/or inject boiling bleach right into your eyeballs. She should be sitting at home slugging down boxes of wine and feeding her cats. Instead she runs what is arguably the most powerful committee in the U.S. House Of Representatives. She controls the purse strings of the House but probably can't control her own bladder. No wonder this country is fucked up.
Since there is a House Committee overseeing literally everything that means the jurisdiction of the "Committee on Oversight and Reform" is literally every aspect of American life. Or as they put it on their website:

Any matter at any time. What the hell kind of jurisdiction is that? It is basically a blanket authorization to sniff around anything they want and make sweeping demands of anyone and anything.
Back to the point. Why send these stupid letters that are basically two pages of accusations against manufacturers of perfectly legal and very popular firearms followed by a list of outrageous and ridiculous demands?
Doing so puts these companies on notice that they are targets. The message is clear, just as clear as a mob warning to those they demand protection money from. Get out of the civilian AR business or we will run you out of business. They chose these big name companies on purpose, all of them have had their firearms misused by nutjobs and they are prominent names in the firearms industry: Ruger. Sig. Smith & Wesson. To a lesser extent on opposite sides of the Gucci-gun spectrum, Daniel Defense (used in Uvalde) and Bushmaster (used in Buffalo). They see at least the first three as low hanging fruit, maybe companies they can scare out of the marketplace before they get sued to death. Ruger, Sig and Smith all make lots and lots of handguns, they can survive without their AR platform rifles. Daniel Defense and Bushmaster cannot.
Sig Sauer in particular. Sig is not really a major player in the civilian AR-15 market. Sure they make them but I would guess they make a fraction of of the number of ARs that Aero Precision or Palmetto State makes. You know what else they make?
The XM5, just adopted by the Army as their new standard rifle plus a squad automatic weapon variant (See: Curious Decisions Are Curious). Not to mention the Sig Sauer M17/M18 that replaced the Beretta M9 as the sidearm for much of the U.S. military.
Care to bet that there will be enormous pressure put on Sig to get out of the civilian AR market if they want to keep those enormous and lucrative military contracts? 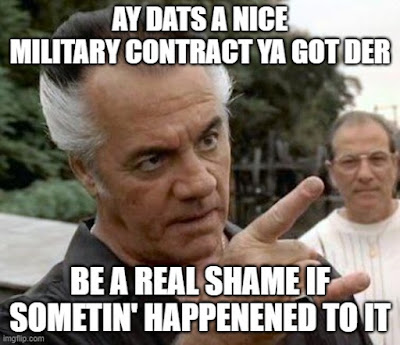 Sig, Ruger and Smith & Wesson are big name companies with larger Boomer consumer bases. They might be vulnerable to this sort of intimidation.
An outfit like Palmetto State? They are making them AR-15s as fast as they can, plus metric craptons of other stuff like a jillion different AK variants, their Dagger 9mm Glock-clone and their new JAKL pistol that is a bufferless long stroke piston AR-15 that is selling like hot cakes....if you sold hotcakes by the semi-load. Saw this yesterday from the founder of PSA:

Six to eight tractor trailer loads. PER DAY?! They are taking so many JAKLs to UPS that the boys in brown can't even keep up with unloading them? Holy crap!
The box for an AR-15 pistol is maybe what, 30"? By 24" wide or so, 4-5 inches thick I guess. I am too lazy to get a tape measure to figure it out for sure. Regardless even packaged for shipping, a JAKL wouldn't take up much space so how many could you reasonably fit on ONE semi trailer? Much less on half a dozen every day? I'll leave it to an engineer like Jim to figure that one out. Suffice it to say, it is a bunch of them at a grand plus each, selling out as soon as they hit the website at 4 PM each day.
They sell a ton of everything, I do more transfers for Palmetto State than every other manufacturer combined. They also see their business as more than just a way to make money, although I am sure they make plenty of cash as well. 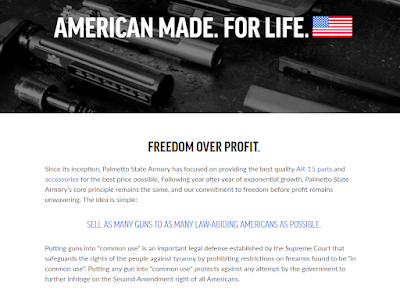 They aren't going to be pushed around, not very easily. These bigger firms that sell lots of shotguns and revolvers and generic handguns? Well I certainly hope not. I am pretty sure Daniel Defense won't back down either but regardless this sort of government intimidation is going to be hard to ignore for a lot of firms.
The pressure is going to keep ratcheting up and there is no end to the appetite for gun control from the Left. It will culminate in the "C" word at some point in the near future. That is a post coming soon.
* Gun control being a bullshit term meaning "White people control"
Posted by Arthur Sido at 1:55 PM