Who Is Afraid Of The Big Bad (Were)Wolf?

My overall opinion of my fellow man can be described as generally poor. Most people are of middling intelligence and are marked by intellectual and often physical laziness not to mention being self-absorbed and entitled. They stumble through life mostly oblivious to the world around them.
In normal times that isn't a big deal, they are not in my way and I can limit my interaction with them. To put it charitably, we police our circle of friends pretty tightly or at least I do. If things get spicy? Then all of the idiots around are going to become a big problem in a hurry.
Worse yet, there are a significant percentage of people who are just shitty people and are looking for an excuse to commit wanton violence and depravity, people who are just barely restrained by the rules of society backed up by the threat of violence or imprisonment from the apparatus of the state. Absent that, these people will indulge their violent nature in a hurry.
That brings me to this video. Just what we need, something else to prep for.
I am not familiar with this guy and the video is about twice as long as it needs to be but the basic tl;dr is this: there are some people who are called "werewolf preppers" that have as their primary plan when SHTF to take what they need from others, rather than prepping for themselves now. The thought process is why store up food and medial supplies when I can just take by force what I need when society breaks down?
We are not talking about people who recognize that in bad times they might be forced to do bad things. In general I don't want to ever have to take a life but if it is a choice between someone hurting my wife or kids and me shooting someone in the face? They are getting it in the face. Something I repeat over and over, people will go to extraordinary lengths in order to protect or feed their children. Make a man, even a normie, desperate enough and he will do desperate things. A fat, weak tub of lard can shoot you in the back as easily as the Navy SEAL with all the tats and the perfect physique. 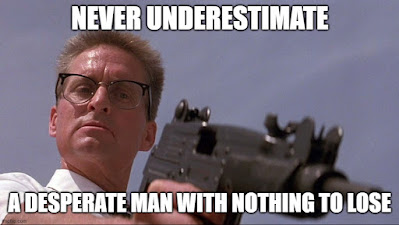 The people were are talking about are those who have as their primary plan to pillage what they need from the weak.
I didn't realize this "werewolf prepper" was a thing but it certainly sounds like it is A Thing.
The troubling part? Despite what the guy says in the video and the empty tough guy rhetoric from a lot of his commenters, it probably would work at least in the short term.
Think about your average suburbanite or urban White or Asian. While those people can be dangerous in a tough spot, as I just got finished stating above, most of them are willfully oblivious and incredibly unprepared, physically or mentally. Many of them are completely unarmed and physically weak and even the ones who do have a gun are mostly untrained and unfamiliar with their firearms.
Now imagine even a half dozen guys, maybe with some professional training or maybe just amateurs who train together with some regularity. They have the means and the will to hurt people and take from them. For a small group of guys like that, your average suburban area is like a giant supermarket. For example, let's look at the demographics of Allen County, Indiana which is our neighboring county and the home of Fort Wayne. You might need to click the pic to see it clearly.

There are 137,851 households in Allen County. Of those 13% are females with no husband present and 28% were single individuals. Those percentages have some overlap. Given those percentages, that means 38 thousand people living alone with about 17 thousand of those households consisting of single females. That is an awful lot of fertile foraging ground just in Allen County. The city of Fort Wayne itself has lots of old people, 12% of all households are people 65 or older.

Out of 101,585 households in the city, around twelve thousand are home to seniors.
Tens of thousands of very vulnerable households? We have pretty high rates of firearms ownership around here but what about it suburbs that are less gun-friendly like those outside of Chicago, D.C. or NYC? Those people are easy pickings.
A half dozen guys who have some training and are geared up working in coordination are a lot more dangerous than double their number of inner city yoofs with stolen guns.
Oh you think you are going to saddle up and stop these guys? That is what the guy making the video and a lot of the people who commented suggested. Me? I think if things go to shit I am going to have my hands full protecting my own family.  I am counting on less prepared people to serve as meatshields to absorb some of the worst of the carnage. In About Normie I wrote:
Normies are only useful as meatshields, living between me and the savages, and they will give the animals some early soft targets to focus on when things first go sideways.
Does that sound cruel and callous? It certainly does. But too many of /ourguys/ are living in a damn fantasy world they created from reading too many post-apocalyptic novels. When things go south, every single day will be a struggle just to stay alive. Food, water, basic medical care, all of these will be hard to come by. It isn't going to be some fairy tale where we overthrow the Feds and create a new, just republic overnight. It is going to be a return to nature, red in tooth and claw. If you make it to the end of a day with all of your loved ones alive and with enough calories in their stomach to make it to the next day, that is a win.
So what of these werewolves?
They are simply another hazard of the world to come to be considered and prepared for. Maybe you will have the local organization under control to the point where you are able to go hunt people like this down. More than likely not. People like these men are evil but not stupid. They will choose the easy prey and avoid the prepared so the best thing you can do is make sure you and yours are a hard target that they will steer clear of.
This isn't a game and empty braggadocio in the normal times won't mean shit in the times to come. I will protect those I can without sacrificing my family but my family comes first. This won't be a video game, there are no do-overs if you die in a gunfight or if you get wounded and slowly die or you starve to death or die of dehydration.
The people who survive the times to come will have hard hearts. That may sound shitty but you will have to make hard choices. If you won't make those hard choices....others will make them for you.
Posted by Arthur Sido at 2:03 PM