While we are still hearing about Buffalo and the alleged racist White gunman who killed some black folks, it is necessary to remember that White people shooting blacks is a "man bites dog" story. The opposite, blacks killing Whites, is so common as to not even warrant mention. Plus it is mostly assumed that when a black kills a White it isn't the black guy's fault and the White person probably had it coming.
VDare ran their usual monthly piece on black on White murders and made this critical point 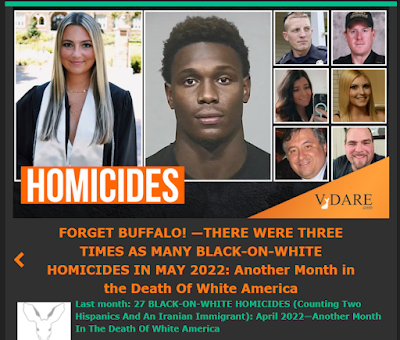 FORGET BUFFALO! —THERE WERE THREE TIMES AS MANY BLACK-ON-WHITE HOMICIDES IN MAY 2022: Another Month in the Death Of White America
I'll keep linking back to this piece: Once Every Minute
On average there is a black on White violent crime committed once every sixty seconds. It is so frequent that most people don't even take note of it, it is simply one of the many costs of living in a "diverse" society.
Every month blacks kill far more Whites than were killed in Buffalo, not to mention the thousands of blacks killed by their fellow blacks every year.
There is definitely a problem with race-based violence in America but it isn't the problem the media talks about.
Posted by Arthur Sido at 7:22 AM