In the wake of yesterday's Supreme Court decision recognizing that our Second Amendment rights don't end at the front door, leftists on social media were spazzing out. Based on their overheated rhetoric I am surprised anyone in America is still alive this morning.
Waiting in the wings is the long anticipated overturning of Roe v Wade/Casey v Planned Parenthood. Compared to a gun rights decision that most liberals don't understand, the leaked Dobbs v. Jackson Women's Health Organization opinion is something they do sort of understand. It means that in many states you will not be able to murder an unborn child. The prospect of that has many on the Left on the cusp of renewing the widespread political violence that has been held in check since Sniffy Joe took orifice. They are promising violence if/when Roe goes down:
"Night Of Rage" Flyers Spotted In DC Ahead Of Roe v. Wade Decision 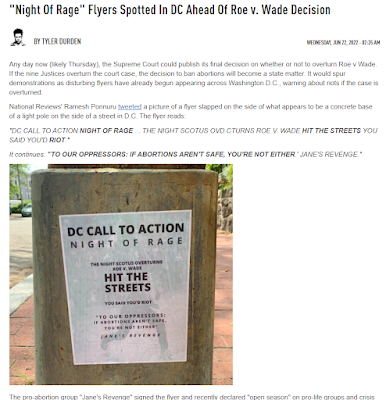 TO OUR OPPRESSORS: IF ABORTIONS AREN'T SAFE, YOU'RE NOT EITHER.
Their "oppressors"? Christian churches, crisis pregnancy centers and members of the SCOTUS itself. This is an overt call for political violence from domestic terrorists but the FBI is probably more concerned with me posting memes of autistic frogs. I don't carry any water for the Catholic Church but I sure as hell don't want to see some lardass chicks with purple hair and their beta-orbiter "boyfriends" burning down churches. I may need to light a few candles to the patron saint of capping pedos, St Kyle Rittenhouse, and do a little protection detail duty in town.
After the rage, what next?
They are telegraphing what they want. In the name of "preserving democracy", what the Left really wants is to nuke the filibuster, break the 9 Justice model for the SCOTUS and pack the court with enough far left idealogues to guarantee that it will do whatever they want. Look at where we are heading. Stephen Breyer is retiring and moving to Miami or whatever old Jewish retirees do these days. That will leave Elena Kagan and Sonia Sotomayor, both quite literally morons, especially Sotomayor, to be joined by another dimwit, Ketanji "Jumanji" Brown Jackson who can't define what a woman is. A dumb mestizo broad, a slightly less dumb Jewish broad and a super dumb African broad. What a dream team! Those three twits on the SCOTUS is a clear sign that we are in the end stage of America, not one of them is smart enough to operate a toll booth much less be making decisions that impact the lives of decent people.
I am already on record as stating that the current occupant of the White House is an illegitimate usurper. It is clear that the 2020 election was stolen to various degrees and that no sane person thinks Joe Biden received 81 million votes. I am not alone in this belief, the Texas GOP recently sent liberals to the fainting couch with similar language in their party platform:
We believe that the 2020 election violated Article 1 and 2 of the US Constitution, that various secretaries of state illegally circumvented their state legislatures in conducting their elections in multiple ways, including by allowing ballots to be received after November 3, 2020. We believe that substantial election fraud in key metropolitan areas significantly affected the results in five key states in favor of Joseph Robinette Biden Jr.
We reject the certified results of the 2020 Presidential election, and we hold that acting President Joseph Robinette Biden Jr. was not legitimately elected by the people of the United States.
Absolutely. They also affirmed the right of Texas to secede from the Union and to ignore Federal laws that violate the rights of Texans, not to mention calling homosexuality “an abnormal lifestyle choice”, again something self-evidently true. Talk of sundering the Union is growing more common and in a major change is coming from both sides of the political spectrum.
Returning to my belief that They will try to pack the court. The Supreme Court has had 9 justices since shortly after the Civil War. Closeted commie Franklin Delano Roosevelt attempted to increase the number of justices after many of his far-left proposals were soundly defeated when they reached the Supreme Court but he was stymied in his court-packing effort by the Congress despite having overwhelming Democrat majorities. Even the Democrats who rubber-stamped FDR's enormous expansion of the scope and reach of the Federal government were not willing to shatter the checks and balances by effectively neutering the Supreme Court. Of course he ended up getting what he wanted eventually as Justices retired and were replaced by FDR but he had to wait instead of packing the court (see: FDR’s Court-Packing Attempt for a brief history of this event).
While it is true that the number of Supreme Court Justices is not fixed in the Constitution, there is a powerful tradition and precedent for the 9. There are many such traditions and precedents that create the governing rules by which our government operates, and abiding by these rules is a sign that both sides are at least making an effort to play by the rules and operate in good faith. Should the Left decide to chuck the filibuster and pack the court in a rush to do so before they lose their majorities in both chambers this fall?
It would indicate that we are no longer even pretending to be operating under a uniform set of rules and laws. It would also mean a de facto declaration of war.  Carl von Clausewitz's famous axiom is "war is politics by other means" and it would appear that They have grown weary of trying the standard means.
It is not an exaggeration to suggest that there is no guarantee that elections will be held this fall. Biden was jabbering the other day and said the quiet part out loud:
President Biden, what do you mean, "We need more money to plan for the second pandemic"?
He said: "We need more money. We don't just need more money for vaccines for children, we need more money to plan for the second pandemic. There's gonna be another pandemic."
Not "a future pandemic", not "the next pandemic". No, he said "the second pandemic" as if it was planned or something. Remember this guy's brain is basically tapioca at this point so if he used the term "second pandemic" it is because he heard someone else say it. The guy doesn't even know how to conduct a basic on-camera meeting without being told exactly what to do including sitting in his own chair and leaving when it is over
‘YOU take YOUR seat’: Very specific cheat sheet reminds Biden how to act 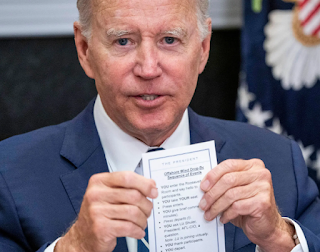 The list, and this is real and not photoshopped, directs Biden to enter the room, say hello to people, thank the participants and then leave. It is especially nice that they put "YOU" and "YOUR" in bold and all caps so he knows that it is important for him to enter the room and not assume someone else is going it.
A demented old man in the White House is getting the blame for the disastrous economic conditions and all signs are pointing toward a massive defeat for the Democrats in November. If Sniffy Joe's party loses both chambers, it is going to get ugly in the Congress with hearings and subpoenas and maybe even a ceremonial impeachment. I wouldn't trust for a second that they won't pull something out of their bag of tricks to try to postpone or suspend elections, including a second "pandemic" that is worse than the first. These shitheads are willing to roll the dice on nuclear war so they can line their pockets with loot from Ukraine, do you think they care about a few tens of millions of dead Americans if it means retaining power?
Our ruling class is not only elderly but evil, sociopaths without even a shred of humanity. There is no limit to what they are capable of and the spicy times are just getting started.
Posted by Arthur Sido at 10:21 AM