They Never Seem To Learn

You know where this story is going just from the headline:
Pregnant woman, 22, is decapitated as her family planned baby shower: Horror as head is found in a dumpster outside house as police charge her 'savage monster' ex-boyfriend, 22, with murdering her and unborn child
White girl named Liese Dodd. Boyfriend/baby daddy named Deundrea Holloway. Guess who! 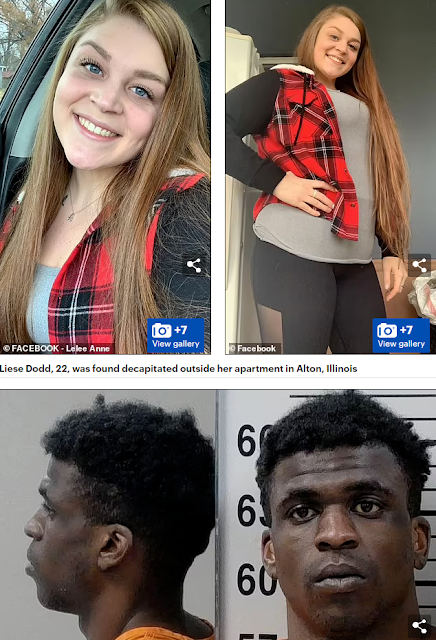 Chubby White girl. Dead eyed black guy. That looks like a relationship meant to last.
Lots of quotes from the girl's mom but none from her dad. Go figure. Also a few clues along the way...
Her mother, Heidi Noel...said Holloway was not the father of the baby, but the pair had been in an on-and-off relationship for two years.
And...
Noel said that because of the 'nature' of Dodd's relationship with Holloway, she would contact her daughter every day to check-in. But when she hadn't responded for a while, she decided to check on her.
Safe to say it was an abusive relationship but she stayed with him for whatever reason, got knocked up and then he decided to kill her and his unborn child. That sounds about right.
When are White chicks going to learn? At best, getting knocked up by a black dude means a lifetime as an aging single mom of a mixed race kid, but often it is worse. In this case much worse. Girls, there are easier ways to get back at your daddy for not buying you a pony for your 5th birthday.
We are such a mess.
Posted by Arthur Sido at 8:11 AM