They Just Couldn't Leave Us Alone

One of the greatest sources of confusion is the forbearance of the Average American. While our country is being ravaged and stolen right from under us, we mostly sit back and do nothing. Strange for people who are regularly accused of being violent and the greatest domestic threat to America, ironic in that we are America and without us there would be no America.
I ran across this quote today and I think it makes a lot of sense, capturing the "a switch not a dial" mentality that differentiates Us from Them. 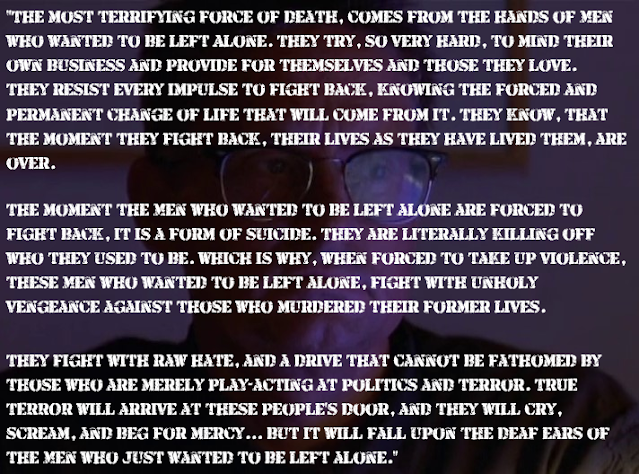 "The most terrifying force of death, comes from the hands of Men who wanted to be left Alone. They try, so very hard, to mind their own business and provide for themselves and those they love.
They resist every impulse to fight back, knowing the forced and permanent change of life that will come from it. They know, that the moment they fight back, their lives as they have lived them, are over.
The moment the Men who wanted to be left alone are forced to fight back, it is a form of suicide. They are literally killing off who they used to be. Which is why, when forced to take up violence, these Men who wanted to be left alone, fight with unholy vengeance against those who murdered their former lives.
They fight with raw hate, and a drive that cannot be fathomed by those who are merely play-acting at politics and terror. TRUE TERROR will arrive at these people's door, and they will cry, scream, and beg for mercy... but it will fall upon the deaf ears of the Men who just wanted to be left alone."

That is pretty powerful stuff when you stop and think about it.
Have you thought about that? Really thought about it? I have and continue to do so.
I know what will almost certainly need to be done and I don't look forward to it.
I also know that when it does happen and I have to do the unthinkable, there is no going back. The guy I was five, ten years ago will be gone forever. No more "planning for retirement", no more "keeping my head down". You can't go back to being Just A Guy.
When it happens, it will be as it says above. We didn't want this, they forced it on us and in doing so they destroyed and killed the men we once were. What takes the place of Just A Guy is going to be ugly and angry.
Who the hell do they think they are? All my life I have toed the line, done the Right Thing. I asked for jackshit in return, just to be left the fuck alone. What I wanted was a quiet life, a wife and kids, a place to live to call our own, some downtime to relax. If they would have left me with that, just left me alone, I would still be the guy I was back in the day, voting for W. Bush, punching the clock, looking forward to the weekend.
They wouldn't leave it alone. They had to push. They left us with no other choices.
Soon they will reap what they have sown and when they do there will be no room for mercy, no room for being the nice guy, the bigger man. All those years of being shit on and just taking it will turn to time for payback. And you know what they say about payback. 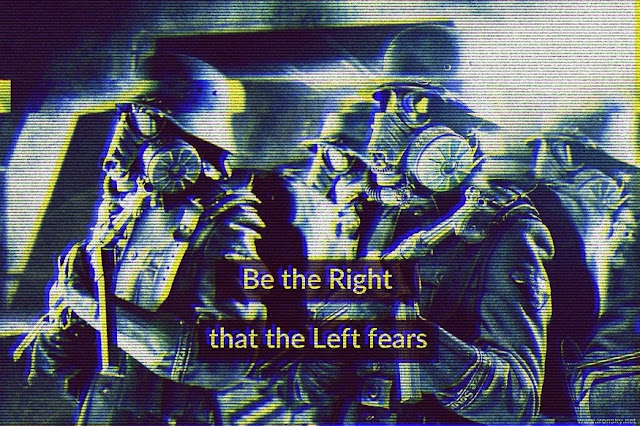 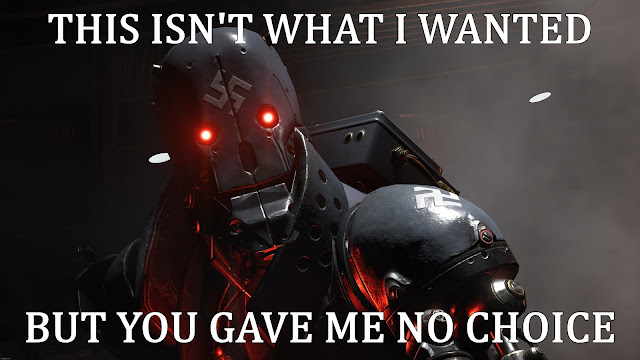