Then One Day, For No Reason Whatsoever...

Many of the oldest memes are still the truest, like "And then one day, for no reason at all, people voted Hitler into power" or in the original German.... 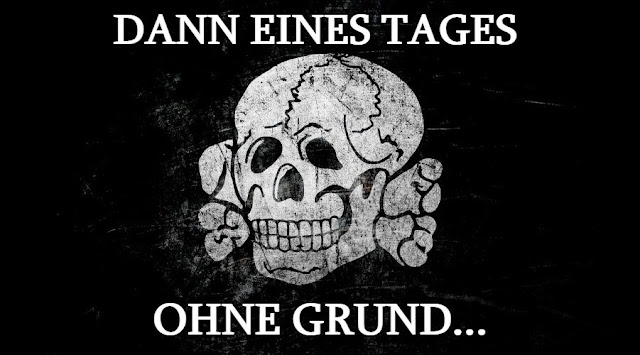 The point of the meme is powerful one, and it is applicable again today with the current state of affairs.
People in America just can't understand why the German people would elect Adolf Hitler to lead Deutschland. He is the embodiment of all that is bad so therefore the German people must have been evil. There is no other explanation for the rise of Moustache Man Bad.
What is missing is historical context.
Thanks to the endless propagandizing of the Second World War by The Usual Suspects in Hollywood most people can't explain anything about World War II other than Moustache Mad Bad killed 6 million Jews. Maybe an older person can still speak about Pearl Harbor and Normandy Beach but the context around World War II is well outside of the understanding of most people.
I assume most of us here understand the situation in Germany pre-Moustache Man Bad. Interwar Germany was in the depths of an economic crisis during what is known as the Weimar Republic, a period that has become synonymous with economic catastrophe and hyperinflation. The pictures from that era show people using wheelbarrows of Marks to buy a loaf of bread, using stacks of cash to heat their home or wallpapering rooms. By 1933 things were so bad that the German people were desperate for something, anything to alleviate their suffering and reverse their humiliation imposed on them after the end of World War I. That something, anything? Moustache Man Bad and the Third Reich.
As an amateur observer of the human condition, I have assembled a modest list of truths that I keep on hand. This is one of Arthur's truths to live by:
People are incredibly predictable. Until they aren't.
Show me a regular person under regular circumstances, give me a little info about them and a hypothetical situation and I can probably tell you how they will react. Take that same person and put them significant stress? Suddenly I don't know what they will do because people under duress can do stuff you never thought they would do.
As someone who knows a little more than the average Joe about Germany under the Nationalsozialistische Deutsche Arbeiterpartei, more commonly known as the Nazi Party, I like to think I can view what was going on with a little more nuance than simply "Moustache Man Bad!". German National Socialism was a pretty radical new approach in response to the early stages of the liberal democratic capitalistic system on the one hand, and the looming threat of Bolshevism and Marxism rising from the East in the Soviet Union. Much of their 25 point National Socialist Program, which virtually no one who calls people Nazis online and brags about being "anti-Fascist" has actually read, has to do with racial solidarity but it also includes stuff like:
All citizens must have equal rights and obligations.
Abolition of unearned (work and labour) incomes. Breaking of debt (interest)-slavery.
In consideration of the monstrous sacrifice in property and blood that each war demands of the people, personal enrichment through a war must be designated as a crime against the people. Therefore we demand the total confiscation of all war profits.
We demand the nationalisation of all (previous) associated industries (trusts).
We demand an expansion on a large scale of old age welfare.
We demand the creation of a healthy middle class and its conservation, immediate communalization of the great warehouses and their being leased at low cost to small firms, the utmost consideration of all small firms in contracts with the State, county or municipality.
It is safe to say a lot of "anti-Fascists", if presented with ideas like that, would enthusiastically support them as long as you don't tell them they originated with Adolf Hitler. Most of the 25 points are direct responses to the perceived abuse and excess of the elites in Germany at the expense of the German people. The German people, again desperate for someone to lead them out of their misery, responded to this in 1933 by voting for the NSDAP by a more than 2-1 margin over the next closest platform. The rest, as they say, is history.
Desperate people will turn to desperate measures.

The lessons for today should be apparent.
Germany didn't elect Hitler and the NSDAP because they all just hated Jews and voted for the guy who also hated Jews. The German people elected Hitler because they had been pushed into a corner and they responded the only way they thought they could, by voting for someone who declared he had the interests of regular Germans first and foremost.
In the current day we have something similar going on. The actual American people are being squeezed and replaced while simultaneously being vilified for being awful people for noticing that we are getting shit on. Elections are stolen, we are being silenced and all the while the burden of keeping the lights on falls more heavily on us even as we grow fewer in number.
This should not be read as a defense of National Socialism or an excuse for German atrocities in the prior century. It should be read as a warning to those who seek to crush us under their heel that when backed into a corner and left with no other choice, people will often lash out in self-defense and that can manifest in very unpredictable ways.
Those who fail to learn the lessons of history are doomed to repeat them. We might be seeing a repeat in the near future as the same errors of judgement are being played out right in front of us.
Posted by Arthur Sido at 7:00 AM