The Ice Cream Man Is Coming!

Each day seems to bring a new contender for "blackest news story ever" and we have a solid choice here: 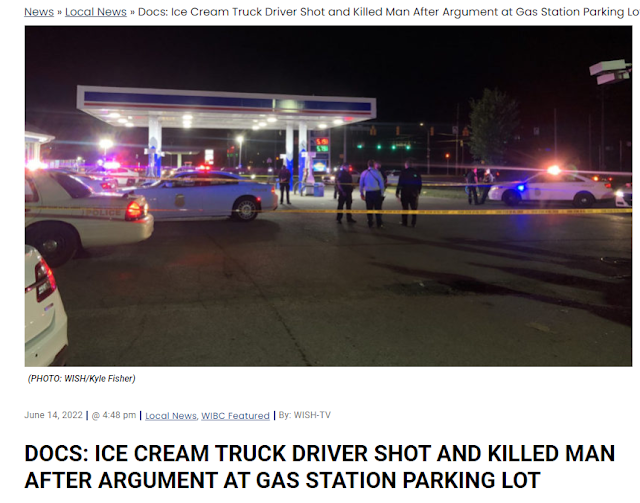 You have the read the whole story but here it is in a nutshell. An ice cream truck driver, 42 year old Darius Butts, pulls into a gas station and  hits a Camaro owned by one Desmond Banks. They both get out to look at the damage to the Camaro. Apparently words were exchanged and the driver of the ice cream truck, Mr. Butts, decides to shoot Mr. Banks multiple times, killing him. Of course he did.
Mr. Butts flees in the ice cream truck, this is slightly before 11 PM.
Police and EMTs show up at the scene and find Mr. Banks dead near his Camaro. An hour later, this happens....
While officers were investigating the scene, Butts returned to the gas station at 12:02 a.m., where he told officers that he shot Banks. When Butts was brought in for questioning, a statement was unable to be taken due to Butts being intoxicated and angry.
On June 10, an anonymous tip revealed the location of the ice cream truck Butts drove at the scene of the crime. After a search warrant of the truck was granted, a pistol was recovered from the truck’s floorboard by the driver’s seat.
He came back to the gas station, shitfaced drunk, and tells the cops he shot Banks but he is too drunk to give a statement. Being drunk and also super smart, he ditched the ice cream truck and left the damn gun on the floor of the truck.
I immediately thought of this clip from Eddie Murphy....
If Mr. Butts is your ice cream man, just know that when he is coming, he is coming strapped.
Posted by Arthur Sido at 6:00 PM