The Grift Of The Century Grifts Onward

If you are like most people, you will have noticed that the war in Ukraine has largely faded from the public eye, other than Biden trying to blame Vodka Man Bad for high gas prices. It has been going on for months and it is apparent to even the most diehard "The Russians are on the ropes!" bloggers that Ukraine is not going to pull off a valiant victory thanks to plucky grannies with AKs gunning down Russkies. In fact it seems like life is getting worse for everyone thanks to the response from the West and that Russia is poised to come out of this war with all of the strategic goals accomplished and having watched the West deal itself a potentially fatal self-inflicted wound.
It is also self-evident to the observant that this whole thing has been an opportunity for a massive grift, a cash grab on a scale almost unheard of (see: The Grift Of The Century and Like I Said, The Grift Of The Century). No one in Ukraine is "winning" or benefitting from this prolonged war other than the people who are skimming from foreign aid or selling Western munitions out of the back of a truck to the highest bidder. The Ukrainians are going to lose and the Russians are going to win. But the war isn't over, the West isn't encouraging Ukraine and Russia to come to the negotiating table. Just the opposite.
UK army chief warns that Britain ‘must prepare to fight’ over Ukraine 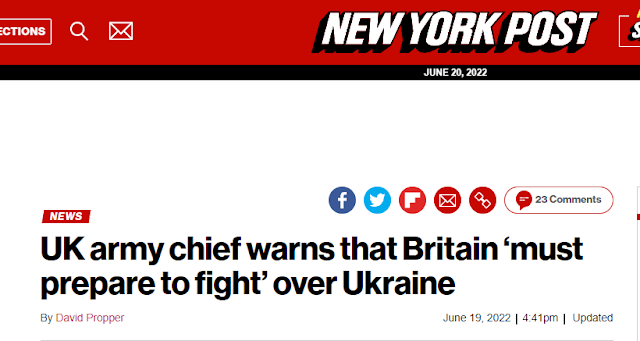 The United Kingdom’s new army chief has warned that British soldiers “must prepare to fight in Europe once again” amid the Ukraine-Russia war — and as concern is mounting that Belarus troops could join the Russian invasion.
General Sir Patrick Sanders, in a message to his soldiers, said Russia’s attack on Ukraine “underlines our core purpose to protect the UK by being ready to right and win wars on land,” according to Sky News.
Sir Patrick, who just took over the top army post, described himself as the first chief of the general staff since 1941 to take command of the army “in the shadow of a land war in Europe involving a continental power.
“There is now a burning imperative to forge an Army capable of fighting alongside our allies and defeating Russia in battle,” he wrote.
"Sir" Patrick here is talking about getting into a European slugfest with Russia. How many of the finest young Englishmen died in the prior two land wars in Europe? Somewhere around 383,000 from military actions in World War II and 887,000 in World War I. Over one million, mostly young men, slaughtered and for what? So Europe could surrender itself to African and Middle Eastern migrants?
NATO is warning that the Ukraine war could "last for years" 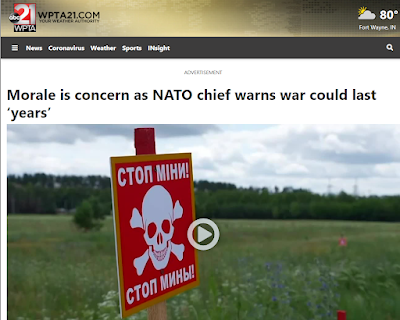 How can Ukraine keep getting pummeled for years? Why would they? You can only figure that out if you figure out who is benefitting.
Meanwhile a NATO nation, Lithuania, is cutting off transit between Russia via Belarus and the Russian enclave of Kaliningrad 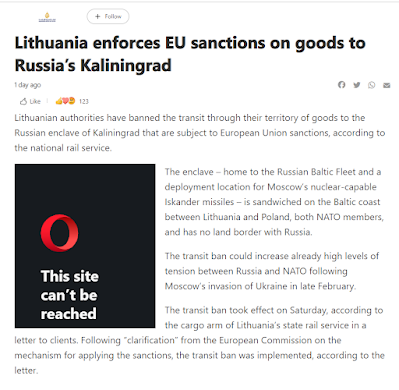 Lithuanian authorities have banned the transit through their territory of goods to the Russian enclave of Kaliningrad that are subject to European Union sanctions, according to the national rail service.
The enclave – home to the Russian Baltic Fleet and a deployment location for Moscow’s nuclear-capable Iskander missiles – is sandwiched on the Baltic coast between Lithuania and Poland, both NATO members, and has no land border with Russia.
Kaliningrad has no direct access to Russia so cutting them off via land means only sea and indirect air flights are able to get there. Russia is not pleased of course, as Lithuania acts as a proxy to provoke them.
Russian officials have stated that Lithuanian’s move is an egregious breach of international law and akin to a full blown economic blockade and an attempt to “place the region in an economic chokehold.”
Russia has warned that unless the ‘blockade’ of Kaliningrad is lifted immediately, Moscow may have no choice but to “untie its hands” and rectify the situation by any means necessary.
Another clear provocation and this time by Lithuania, a Baltic nation with all of 2.8 million people. Should Russia take some actions to "rectify the situation", the Lithuanian people can look forward to be caught in the middle of an expanded war that would devastate their country. I wonder if they are on board with that? I also wonder if the English are looking forward to shipping their sons off to die on the continent once again?
Keeping this conflict going serves no purpose other than lining the pockets of oligarchs and the military-industrial complex. A lot more Europeans might die just so Raytheon can boost quarterly profits.
Posted by Arthur Sido at 10:48 AM