A reader from the last post, White Lives Matter, pointed out this story: 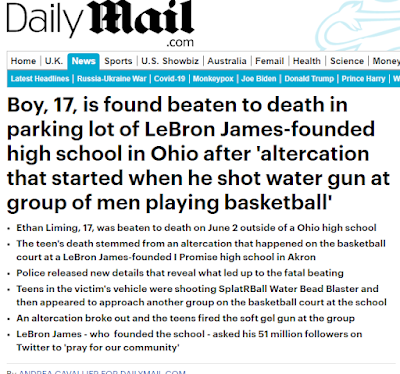 Boy, 17, is found beaten to death in parking lot of LeBron James-founded high school in Ohio after 'altercation that started when he shot water gun at group of men playing basketball'
Here is the 17 year old boy, Ethan Liming: 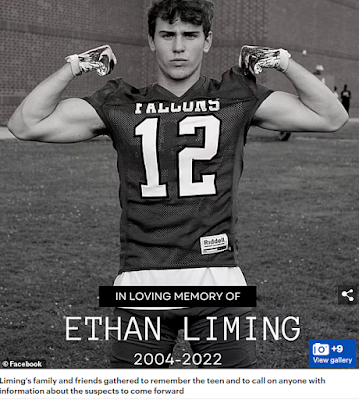 We know a basic description of his killers and you will not be shocked at all.
Liming's father Bill told the local news that he was fighting for his life.
'He was fighting back for his life,' he said. 'A third individual came up behind him and overwhelmed him. And they knocked him out on the ground. His friends tried to help him.'
He said his friends unsuccessfully tried to drive the other group away.
'My son Ethan Liming was murdered by three African American males and a female who stood by and did nothing,' Bill Liming said.
The report indicates that some of the kids were shooting people with a Splatrball Water Bead Blaster. I can see you doing that to the wrong people and getting your ass kicked but of course a regular ass kicking isn't good enough for Africans. According to Ethan Liming's father, Bill Liming, Ethan was sucker punched.
Ethan and a friend were sitting in a car at the time and thought what was going on was still horseplay, his father said.
"When he got out of the car and told people to relax, it's a joke, it's a joke, and the individuals didn't like that. One individual attacked him," he said.
A second individual came up from behind and hit Ethan in the head, his father said.
That sounds about right. He tried to calm things down and of course was attacked and then a second African kid punched him from behind because that is what they do. What happens next is all too predictable:
The friends Ethan was with that night loved him and he loved them, his father said.
"They did everything they possibly could to help Ethan," he said. "They called 911 to get help. And when Ethan was knocked out and on the ground, his two African American friends tried to pick up his body and put him in the car to help save his life. He was still alive. He was still breathing. The people who murdered him didn't like that and drove them away. They physically assaulted and beat the white child who was there with him. ... Help did not arrive in time. They did the best they could to help him when they were there. My heart's broken. We don't want any other children, or anybody else, to be hurt in that area. It's not safe. It's not secure."
It sounds like Ethan was knocked out but still breathing but in their rage and violent nature, the black teens kept hitting and kicking him until they killed him and kept his friends from trying to get him assistance. A decent human being would have let them but these are not decent human beings and I question whether they even qualify as human at all.
The local cops have already determined that there was no racial component. Of course.
Police determined that the collective actions of the teens in the car appear to have 'unfortunately provoked the altercation.'
Police added that there is 'no evidence to this point, to suggest the incident was in any way, racially motivated.'
'There were assumptions made that this was a race-related incident,' the police chief said at the presser. 'There is nothing that we have in our possession right now, any information at all, indicating that race played a role in this homicide. If we do receive information that race played a role in this, as in any homicide, we will consult with our prosecuting attorneys and add additional charges.'
Get the fuck outta here with that. If three White teens beat a black teen to death, you can be damn sure they would assume it was racially motivated and the LeBron James Family Foundation wouldn't be offering empty platitudes. Everyone would be telling you that three racist White kids beat some poor black baby to death because of White supremacy or some other bullshit.
Ethan Liming is just another statistic now, another White killed by blacks and his death is already being swept under the rug by the media and law enforcement. How many more must die?
Posted by Arthur Sido at 11:17 AM