On The Other Side Of The Roe Question

Here is a compelling story that bolsters the pro-"choice" argument: 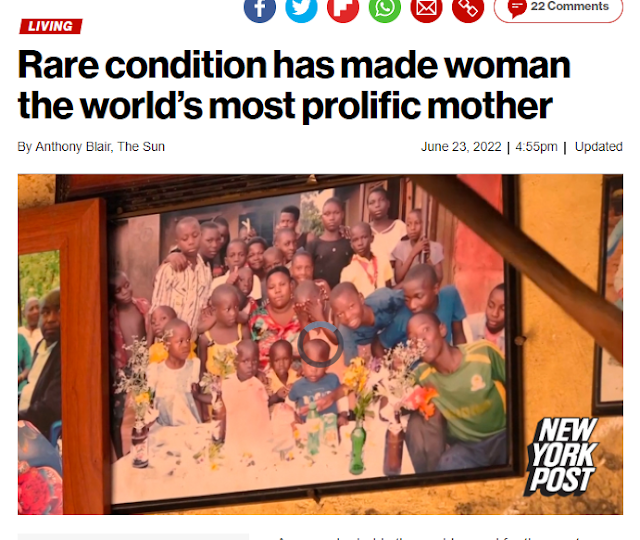 How prolific you might ask?
Prolific to the tune of 44 children.
44
Read on.....
Mariem Nabatanzi had given birth to 44 kids by the age of 40 and was told that no family planning methods would work for her.
The woman from Uganda, East Africa, has given birth to four sets of twins, five sets of triplets, and five sets of quadruplets.
Only once did she give birth to a single child.
Six of her children died, and her husband abandoned her and ran off with all the family’s money, leaving Mariem with 38 children – 20 boys and 18 girls – to raise single-handedly.
Mariem was married off when she was only 12 years old after her parents sold her and soon after she fell pregnant, giving birth to her first child at the age of just 13.
Fertility rates are far higher in Uganda, where the average is 5.6 children per woman, according to the World Bank.
That’s more than double the world average of 2.4 children.
44 kids, her husband ran off, six kids already have died. What does the future hold for the surviving 38 children? Probably more of the same poverty and hopelessness. 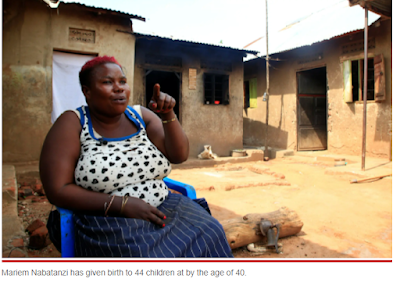 Uganda has a fertility rate of 5.6 children per woman and also is one of the shittiest of shitholes in the world. From Wikipedia:
Uganda is one of the poorest nations in the world. In 2012, 37.8 percent of the population lived on less than $1.25 a day.
If there was ever a place where aggressive contraception methods was appropriate, it is Uganda but Uganda isn't even the most fecund country in the world. 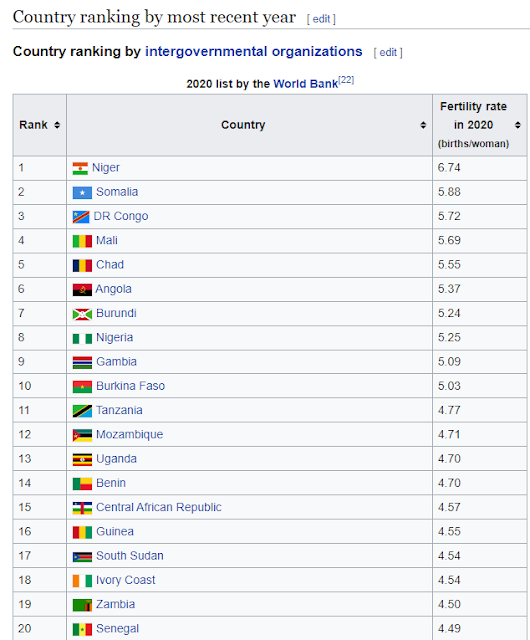 Compare these countries to the opposite end of the spectrum.... 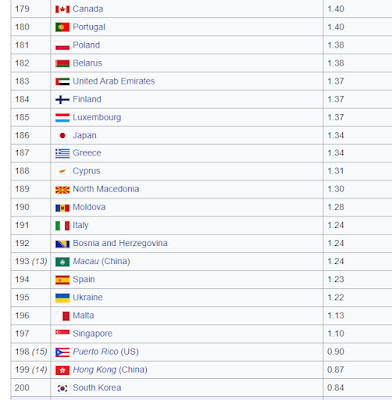 The bottom of the fertility scale is almost all East Asian or White majority nations.
A quick scan of the list shows not one majority White or East Asian nation at or above the replacement rate of 2.1 children per woman. This is one of the most critical factors to look at when thinking about the intermediate future of the world. The producers, the people who invent stuff and make stuff run are slowly dying out and the people who consume and add nothing to the world but mouths to feed are still multiplying at an enormous rate. I refer back to this chart on a regular basis, Steve Sailer's "World's Most Important Graph" because it truly is that important. 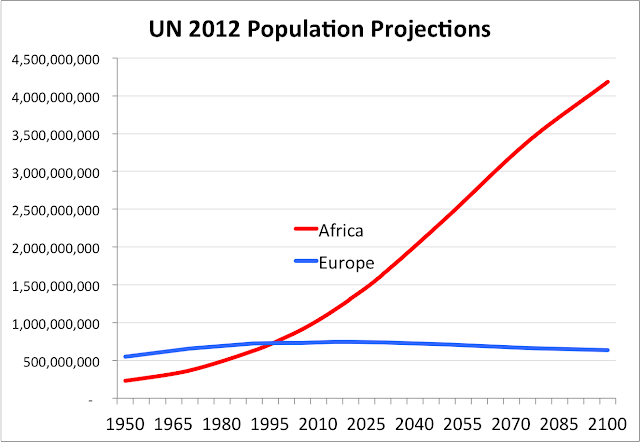 Left to their own devices, the massive birth-rate of Africans would sort itself out as excess children died off but of course that isn't what is happening, not for decades. In 1985 when I was still a yoof in middle school a whole slew of singers got together to raise money for Africa with the song "We Are The World".
This effort raised tens of millions of dollars, although I suspect a lot of that money didn't make it anywhere near Africa or the money that did ended up in some tyrants Swiss bank account. Did it make a difference or even a dent? Not really. It might have fed some African kids for a short time but famine has ravaged the continent on and off ever since, interspersed with civil wars and pandemics. It won't ever change because Africa is full of Africans.
Thanks to the squeamishness of Western Christians, the aid provided to Africa has never dealt with the underlying issue: Africans cannot manage themselves and subsidizing them simply makes small messes into larger messes.
Is it cruel to see a child starve to death? Of course but is it not crueler still to provide that child with the barest of subsistence so she can grow to maturity and start having 6, 8 or 10 children of her own who will starve to death?
Faced with starvation, as will certainly be the case what do you suppose they are going to do? Just sit around and starve? Of course not, and with the financial aid of the traitorous fifth column in the West they will head north to Europe and the promised land of free gibs from the evil White man. As I was writing this I came across this lengthy but excellent post from John Waters (HT: WRSA):
Europe’s Death Rattle: Part I
Excellent stuff, especially this:

All this is planned. It will not be an unforeseen, happenstance outcome of random events. Social chaos is baked into the cake of Covid disruption and tyranny. The war in Ukraine — in effect an undeclared war by the United States and NATO on the Russian Federation, with Ukraine merely the proxy patsy in the middle — has not turned out as the US and EU leaders foresaw, and this has come to mean that the social disaster will be far worse than they intended. But this does not mean that the tyrants will instantly begin to amend their conduct and seek to mitigate its effects. We shall see, therefore, the culmination of a long process of social-engineering and race-baiting that is calculated to deliver to the globalist project the means to enter into a whole new dispensation, in which the already super-rich will become far richer, and the inhabitants of the afflicted countries — in Europe, Africa, the Middle East and beyond will be, though all equally subject to dispossession, thrown at each other’s throats. The people of Europe will be daubed as racists for seeking to put their own children first.

RTWT. I have some quibbles but on balance it is an excellent piece.
All of this is planned. All the misery, all of the destruction and death, it is all planned. It is intentional and has a distinct end goal. That goal is a global aristocracy ruling over the teeming masses of humanity who live in abject poverty. The main and last remaining obstacle?
You.
What to do? You must be removed, you being White people who are insufficiently self-loathing and insist on things like our rights and having families.
Removing us is what it is all about. Absent White people the world is easy pickings for the cosmopolitan globalist elites.
This is why the abortion question is not as cut-and-dried as I once thought it to be. Despite the lofty words about all men being created equal, it is simply not the case. Men are not created equal. A billion White people are not the same as a billion Africans or mestizos. It is why an racially homogenous nation like Japan is a nearly crime free paradise compared to a racially homogenous country like Uganda. Removing the population of Europe and North America and replacing us with Africans and Central American mestizos won't result in an equivalent society with a darker hue.
The issue of being "pro-life" is a far more complicated question than we have been led to believe but there are very few voices that point this out. It is presented as a starkly dichotomous issue, pro baby murder or pro-life. Either you want women to be able to kill their children up to the moment they free of the birth canal or you don't want any woman anywhere to fail to carry to term any child. It is a complex question for sure and one everyone has mishandled at nearly every term.
One thing I know for certain, absent some sort of calamity we are looking at a migration of tens of millions of people who can't manage to make a go of it on continents teeming with life and into nations that simply can't absorb those tens of millions without in turn reducing their own heritage populations to the same levels of destitution these economic migrants are fleeing from. Western Europe has no will to stop it and apparently neither does North America. That leaves Russia and Eastern Europe and the Chinese alone at the top of the heap by the end of the this century or likely much sooner.
It is a tangled web and the ones weaving it are not your friends.
Posted by Arthur Sido at 8:52 AM