Oh Obi, What Have They Done To You?

When I saw that somehow Disney had roped Ewan McGregor to reprise his role playing Obi-Wan Kenobi in a prequel miniseries, I was pretty sure it was going to be a disaster. When the trailer came out with the Mary Sue angry black woman Jedi hunter? I knew it was going to be bad. Still it was Obi-Wan Kenobi so I watched the first three episodes (while not violating my rule against paying a dime to Hollywood). McGregor should be ashamed that he needed the money that badly.
Yes, it was as bad as I was expected. Not just bad but dumb. The plot is dumb which is hard to do when you know where it is going. Luke and Leia are little kids, Obi-Wan is living on Tatooine watching over Luke while he grows up so he can eventually train him. Vader is evil. The end of the story is already written so we know Luke and Leia survive, so does Obi-Wan, so does Darth Vader. What we are left with is filling in some backstory. They can't even do that and make it interesting with an existing storyline and existing characters.
Obi-Wan Kenobi is a beloved figure from my childhood. He represented a powerful, wise elder man who is a mentor and a hero to Luke. Of course he is also a White man who is mainly revered by White men who grew up watching the films and with the Kenobi action figures.
We can't have that so Obi-Wan must be destroyed. He goes from one of the most powerful Jedis on the council in the prequels to the last of the Jedi in the original trilogies but in the interim series?
Obi-Wan is weak, frightened, has forgotten how to use the Force, has lost any sort of moral compass. He is supposed to be protecting Luke but for some reason buried his lightsaber in the middle of the desert, but is able later to find the exact spot and dig it up because on Tatooine the wind doesn't cause the dunes to shift like every other desert. The same Obi-Wan who as an old man faced down his former apprentice and sacrificed himself so Luke and the others could escape now is confronted by Darth Vader....and promptly runs in terror. He is eventually cornered and Vader thrashes him without even so much as a mild fight before Obi-Wan is rescued by a different strong, powerful woman of color and a droid. Not kidding. 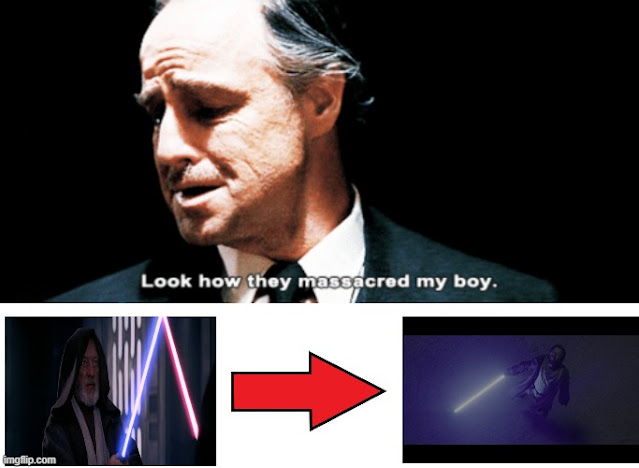 Meanwhile the angry black woman Jedi hunter, Inquisitor Reva played by angry black woman in real life Moses Ingram, spends most of her screen time screaming and glowering at people. Really if I want to see an angry, screeching black woman attacking people I can watch Worldstar or TikTok videos.
What is happening is what happens over and over. A beloved childhood memory is shit on by The Usual Suspects precisely because it is a White male heroic figure revered by White men.
The rest of the miniseries plot is obvious. The angry black woman used to be the bold and brave black girl padawan who led the other padawans to safety. She is pissed at Obi-Wan and will somehow defeat him but then have a redemption arc or some other bullshit. I'll watch the rest of the series just for the lols, the fourth episode is out, but Hollywood once again proves that what should be a slam dunk is just another opportunity to crap on their primary audience. They just won't do it with my money.
Posted by Arthur Sido at 8:44 AM