From the "The Simplest Answer Is Often The Correct Answer" files, multiple different sources that are baffled as to why certain places have far less gun crime than (certain parts) of the U.S.
First up

Well Tom that is true but it is also true of lots of other places with lots of gun crime. What else might account for this?

Ah, Hawaii has a miniscule black population and what is there had to get there by boat or plane, not by loading up the Cadillac with all you chidlins and hittin' da road to go Norf. Not to mention Hawaii is one of the most expensive states to live in. That combined means you probably have an atypical population of blacks, not to mention not many blacks at all.
How about overseas? This came to my attention today.... 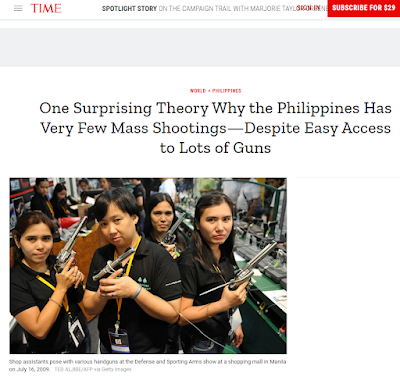 To be sure, it isn't like the Philippines are crime free as it states in the article:
To be clear, homicides involving firearms are a fact of life in the Philippines. Hitmen can be hired for as little as $300. In fact, the Philippines is one of the deadliest places in Asia when it comes to firearm homicides. The country saw over 1,200 intentional killings using firearms in 2019. This meant guns killed one in every 100,000 people in the Southeast Asian country—one of the highest rates in Asia. (In 2020, the comparable figure for the U.S. is four.)
Three hundred bucks for a hitman? That would be a booming business model in America.
The article suggests that strong social pressure prevents "indiscriminate killings":
For now, though, powerful social factors continue to have a restraining effect on indiscriminate violence. Philippine academic Raymund Narag, a criminology associate professor at Southern Illinois University and a former prisoner himself, says mass shootings in his native country are in part deterred by hiyâ, a Tagalog word meaning shame or embarrassment. Avoidance of hiyâ, and sparing one’s family and community from it, is often described as a core Philippine value.
That is certainly a factor, Asians of all kinds are drastically underrepresented when it comes to violent crime in the U.S. and much of it is socially driven. On the other hand, the Philippines are, like Hawaii, are a group of islands out in the middle of the Pacific, far from Africa and the U.S. alike. Like Hawaii, the Philippines has a small population of African descent and of those it looks like many are Northern Africans rather than sub-Saharan Africans.

Here is another article with a similar theme... 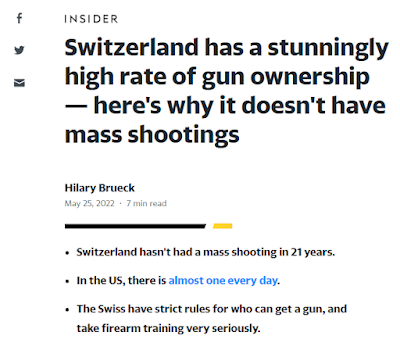 Switzerland hasn't had a mass shooting since 2001, when a man stormed the local parliament in Zug, killing 14 people and then himself.
The country has about 2 million privately owned guns in a nation of 8.3 million people. In 2016, the country had 47 attempted homicides with firearms. The country's overall murder rate is near zero.
What else is different about the U.S. and Switzerland, besides Switzerland only having 8.3 million people?

Only around 83,000 people from Africa, or 1% of the population, and that includes all of Africa so I assume an even smaller percentage are sub-Saharan Africans. The Swiss don't record race and ethnicity but you can tell that it is a pretty White country. Switzerland is also landlocked and is bordered by the Alps to the south which makes for a pretty effective barrier to wandering up from the Mediterranean coast.
There seems to be a bit of a theme here. The places listed that have such low rates of mass shootings also have very few black folk. I am going to keep sharing this chart. 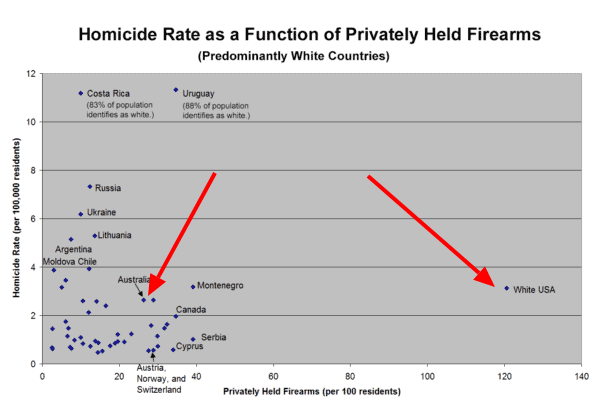 Looking just at White people in America, it is pretty clear that despite our love of guns and lots of them, the homicide rate for Whites in the US is comparable to that of Whites in low gun ownership nations.
It is amazing how people can see the obvious answer while insisting that something, anything, else must be the real reason.
Posted by Arthur Sido at 7:13 AM