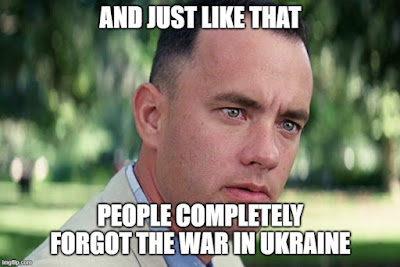 What happened to the existential struggle between Our Second Greatest Ally Ukraine™ and the diabolical forces of Vodka Man Bad? That was all the media could talk about for weeks and now it just doesn't seem all that important. Even the "Russia is losing lol!" bloggers seems to have gone silent on the issue.
The news that is coming out is mostly all bad for Our Second Greatest Ally Ukraine™. 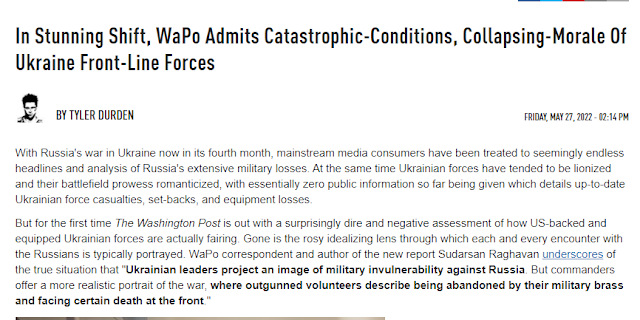 When the WaPo is reporting that things are going poorly, that is a sure sign of D.C. jettisoning Ukraine as a talking point. The Post only "reports" what they are told to report.
I assume that this is a sign that the elites have laundered as much money as they can from this war and are moving on to more fertile ground.
The net result is that the end of the war will likely be what it was always going to be, Ukraine not joining NATO and Russia getting chunks of Ukraine. Our actions have accomplished exactly two things:
1. It prolonged the inevitable which has led to thousands of additional deaths on both sides and even more destruction of Ukrainian infrastructure.
2. It has also hammered our already teetering economy. Gas locally is at $4.89 and heading for $5, maybe as soon as this weekend if not sooner according to Gasbuddy.com:
Motorists in the Great Lakes could see prices jump early in the week to new record highs, and the rest of the nation will follow. Odds are rising that we’ll eventually see the national average reach that dreaded $5 per gallon.

Food prices are still going up and if the rumors are true, we are at the beginning of food inflation, not the end. This fall could see some enormous price increases as crop prices skyrocket.
We sure taught Vladimir Putin a lesson alright!
The lesson is that America is a paper tiger and no longer is to be feared or even respected.
Who will tell the mothers of dead Ukrainians that it was all just a way to line the pockets of Zelensky, Western politicians and arms manufacturers?
Posted by Arthur Sido at 10:53 AM