From "The Universal Franchise Was A Mistake" Files

Behold, Krystle Matthews. She is a South Carolina State House Representative and is in a runoff election tomorrow to challenge Republican Tim Scott for the U.S. Senate seat. 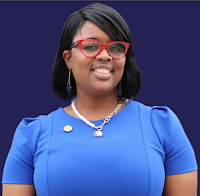 She is a strong black wahmen of colour who don't need no man. A proud single mom with five chidlins, she is a real winner but even she needs her some hep when it comes to winning. She was recently caught on a recorded phone call to an inmate, one David Solomon Ballard. 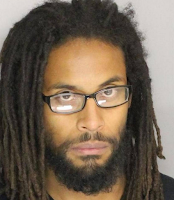 Man who threatened life of SC sheriff charged with assaulting SLED agent
A South Carolina man who was in jail for threatening the life of a Midlands-area sheriff was arrested and charged for assaulting a State Law Enforcement Division agent Wednesday.
David Solomon Ballard, 33, faces multiple charges for the crimes he’s accused of committing.
For threatening Aiken County Sheriff Mike Hunt, the Jackson resident was charged with threatening life, person or family of a public official. The charge is a felony with a maximum sentence of five years in prison, a fine of up to $5,000 or both.
For assaulting a SLED agent, Ballard was also charged with assault and battery of a high and aggravated nature. The charge is a felony with a maximum sentence of 20 years in prison....
... Ballard has an extensive arrest record, according to aikencountysc.gov. He has previously been arrested and charged with: Assault & Battery (3rd degree) Driving Under Suspension (multiple charges) DUI (multiple charges) Simple Possession of Marujuana (multiple charges) Possession of Drug Paraphernalia Assault / Assault & Battery with Intent to Kill Drugs, Distribute to Under 18/Sched V Drugs, Pur Of Cont Sub w/in proximity of school
Mr. Ballard is a swell guy who is naturally who you would reach out to on a strategy call. Who doesn't solicit help from violent convicts while running for the U.S. Senate?
Here is the call:
Some highlights: 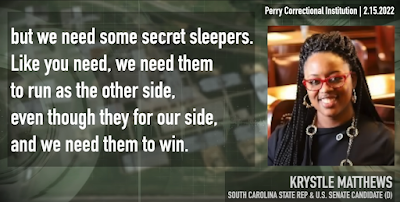 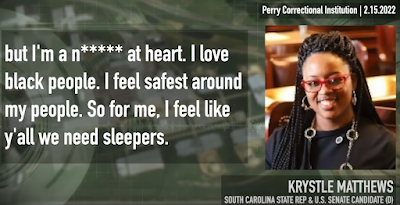 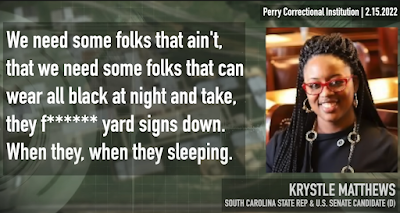 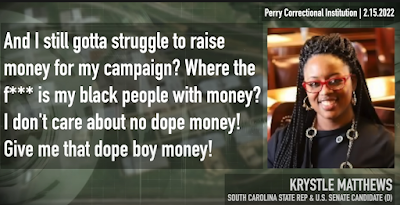 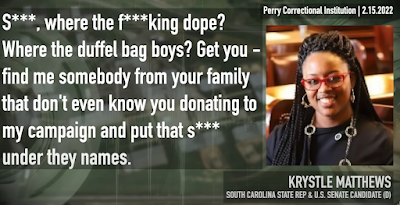 This is definitely someone who should be making laws that impact me and my family.
I am not a lawyer but it sounds like she is encouraging this inmate to get his buddies on the outside to get duffle bags of drug money and donate it under other people's names to her campaign. That sounds like a felony or something.
I dropped a note to the attorney general of South Carolina, we will see if he does anything or if the South Carolina Democrat Party intervenes. This might actually help her win some votes in the black community...
Posted by Arthur Sido at 8:00 AM