In my post The Death Toll Keeps Climbing, I recounted the story of Ethan Liming, a White teen in the Akron area who was beaten to death by three blacks. Those three blacks have been arrested. 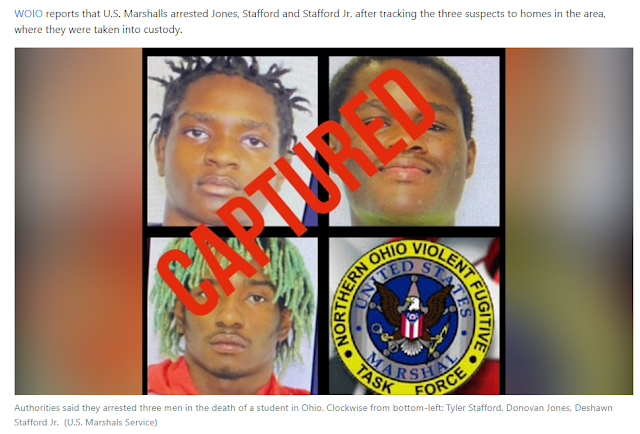 U.S. Marshals and Akron police officers arrested Deshawn Stafford Jr., 20, Tyler Stafford, 19, and Donovon Jones, 21, on Saturday, June 11.
All three are charged with murder and are being held on a $1 million bond.
Look at that mother fucking on the top right with the smirk on his face. This stupid fuck thinks it is funny that at he has been arrested and likely is going to the slammer for the rest of his useless life. At 20, Deshawn Stafford Jr. is looking at the better part of half a century in a maximum security prison. With any luck some Aryan Nation dude or one of his own fellow Wakandans sticks a shiv in his heart, saving us all the cost of keeping this piece of shit alive.
At least they captured this trio of animals but sadly not before they took a life.
Posted by Arthur Sido at 7:40 PM