This is something I did not know but am not at all surprised to learn. 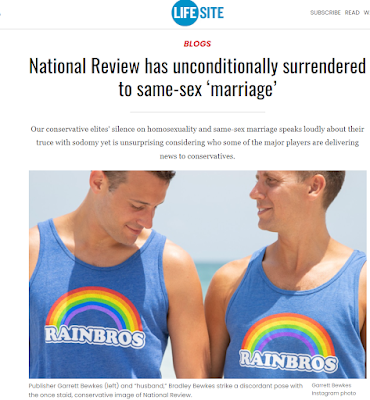 It seems that the current publisher of National Review, one E. Garrett Bewkes IV, is a faggot "married" to another faggot going by the name Bradley Bewkes.
Until a few days ago, few people outside the offices of National Review knew that the revered conservative magazine’s publisher is a homosexual, “married” to a man.
“The publisher of the most important conservative magazine of the last 60 years, National Review, is gay-married?” wrote The Stream’s Peter Wolfgang, who broke the story. “Garrett Bewkes, the man overseeing the magazine once edited by William F. Buckley, has a husband.”
“He’s been the publisher for five years. How did this happen? And what does it mean for the conservative movement and the Republican party?” Wolfgang asked.  “I suspect a lot of NR’s long-time readers don’t know this. I wouldn’t have known if a local newspaper hadn’t run an article by Bewkes’ ‘husband’ Bradley.”
Faggotry has become completely acceptable in mainstream Normiecon circles, at least at the elite levels. People like Richard Grennell, Chad Felix Greene and Rob Smith are mainstream in conservatives circles while smoking poles in their leisure time.
Wonder why abortion and guns are still hot button issues for Republicans while gay "marriage" doesn't even warrant the faintest whisper?
It is because "conservatism" is riddled with faggotry and even those who aren't packing fudge are scared of the homos. My governor, useless and dumb Eric Holcomb, recently vetoed a bill to protect girl's sports from tranny boys. Our legislature overrode his veto but it is a sign of how cowed the average Normiecon political figure is in the face of guys who take it in the ass.
I wrote about this a few years ago in a post I would recommend: Open Borders, Sodomy and Israel: American Conservatism In 2019
Things were bad in 2019, they are much worse in 2022.
Conservatism is a barrier not to degeneracy but to a real right-wing. As such it needs to be destroyed root and stem.
Posted by Arthur Sido at 9:23 PM