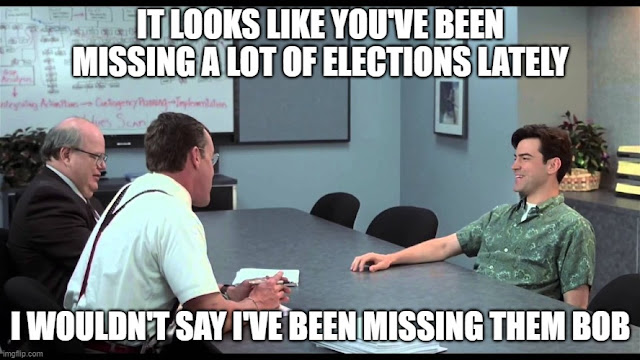 Something happened this week that hasn't happened since 1989. I didn't show up to my designated polling place for an election.
Tuesday was primary day in Indiana. Nothing very exciting on the ballot, other than a couple of hotly contested Republican races in my county for Sheriff and a couple of other slots. There were more signs out for candidates for Sheriff and some state level jobs than we saw in the 2020 national elections. I am not sure why to be honest, the Sheriff's race was apparently the big draw and the challenger spanked the incumbent Republican. Given the political demographics of our area, the GOP primaries are the de facto general elections. Someone will run for the Democrats but no one will notice and they will get crushed by a huge margin in November.
Anyway, for me and my wife election day has always been an important day. We saw it as a solemn duty and privilege to vote, and it really approached a near sacred obligation. There is something powerful about the act of entering the voting booth and making your choice. No one sees you and no one really knows who you voted for. You are alone and you make your choice.
As a kid I would watch the election returns with my parents, we all gathered around the enormous console TV and watched the coverage. My fondest early political memory was being at my very liberal, in an FDR Democrat kind of way, maternal grandparent's house on election night in November of 1980. As state after state went to Reagan in his 44 state landslide over Carter they grew more and more agitated. I miss them but I was delighted as a soon to be 9 year old that Carter had lost. 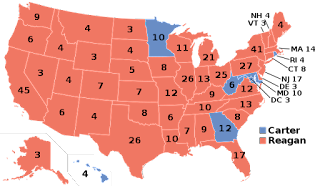 I have regretted some of my votes (looking at you John McCain, in whichever circle of hell you dwell) but not going to vote was unthinkable to me.
Then 2020 happened.
I was already growing increasingly disenchanted. The GOP was riddled with globalist collaborators. They betrayed their White middle and working class base at every turn, sucking up to the Chamber of Commerce, the Military-Industrial Complex and the Israeli lobby while laughing at us behind closed doors. As the truth about the Iraq invasion came out and the Republican party nominated two evil and stupid men back to back in McCain and Romney, I had about had enough. I finally voted for Gary Johnson instead of Mitt Romney in 2012, marking my first break with the Republican party since I voted for George H.W. Bush in 1992 and then I voted for the pothead Johnson again in 2016.
Trump's win in 2016 gave me a glimmer of hope that perhaps things would be different, that we had turned a corner but then four years of Trump blundering about, hiring idiots and traitors before firing them and seeing his agenda thwarted at every turn by his own party really soured me. Even though Trump was a blowhard egomaniac who accomplished next to nothing other than nominating some decent SCOTUS Justices, I voted for him in 2020 as a way to give the middle finger to the neo-Bolsheviks. I didn't expect him to win but I also didn't anticipate how openly we would see the media collaborating with the Democrats and the wanton theft of the election with barely a whimper of protest from the GOP establishment.
It was apparent that the apocryphal saying attributed to Mark Twain was true.

That has led to some soul-searching for yours truly, a political junkie if ever there was one. My choices were pretty clear...
A) Keep on stubbornly showing up and casting my votes in "elections" knowing damn well that "They" won't let another decent candidate win a significant election and even when Republicans do get elected they will be only slightly, marginally better than Democrats and that is being generous.
B) Show up and cast a useless protest vote for whatever insane or idiotic Libertarian they nominated or even more uselessly vote for the Constitution Party candidate. I am not opposed to a really futile and stupid gesture.
On the other hand, and this is my big objection, by showing up to cast a ballot, even a throwaway vote for some third party knucklehead, is at some level expressing a belief in the legitimacy of the process. Your vote signals that you believe the system is still operating as it is alleged to work. Your participation is a signal that you believe the process is legitimate, flawed perhaps but still legitimate. I don't believe that is true.
C) Stay home on election day and work to prepare for a future with a different political system. Reject as illegitimate the entire political system and the government it produces as unlawful and dictatorial, a government imposed on us as a people rather than chosen by us.
Option C is where I am at these days and it pains me to say it but that is where we are. I can't keep pretending that the kabuki theater where we pretend to vote and they pretend to respect our votes while everyone knows better is somehow legit.
For many years I believed the old canards like "If you don't vote, you can't complain". Well I have voted and I have complained and it hasn't done shit. Nor do I believe that not voting for Republicans is tantamount to voting for Democrats. With a couple of exceptions, most Republicans are at best stupid and at worst as evil as the Dems. On the issues that matter, most notably immigration, they are at least as bad as Democrats. It makes little difference if White Americans are replaced by illegal Mexicans or if they are replaced by Afghan "refugees" or H-1B visa Indians and Pakis. Replaced is replaced. When the SCOTUS whipped up a "right" to gay marriage, the Republicans folded like a cheap suit because for all of their empty rhetoric most of them don't give a crap about "traditional values" anymore than the Democrats do. I wonder how many abortions Trump paid for over the years for his various mistresses? When a Republican like Steve King from Iowa stood up for the people who actually vote Republican, namely White people, he was run out of the GOP on a rail. They would rather pander to blacks, Jews and mestizos that will never vote for them than be seen openly advocating for White people.
When November rolls around I am planning on staying home again. It won't be that big of a deal, our local Congressman Jim Banks will win easily and will be just as useless as he has been since taking office. In 2024 it will be a lot harder because that will be a national election and someone will probably have replaced Biden by that point and whoever it is will be much worse. On the other hand, who is the GOP going to nominate? Trump? He will be 78 in November of 2024 and he was mostly a failure in his first tenure. Ron DeSantis? That guy reminds me of every other Johnny-come-lately "this guy is the real deal" Republican for the last 30 years. Republicans infamously wilt when they get on the national stage, he is far more useful as Governor of Florida. He should win re-election easily in the fall but Florida won't stay red forever. More likely it will be some milquetoast dimwit like Marco Rubio who will lose gracefully to the Democrat.
On the other hand if Trump is the nominee, it might be very tempting to vote for him for no other reason than the one that led me to vote for him in 2020. Why? 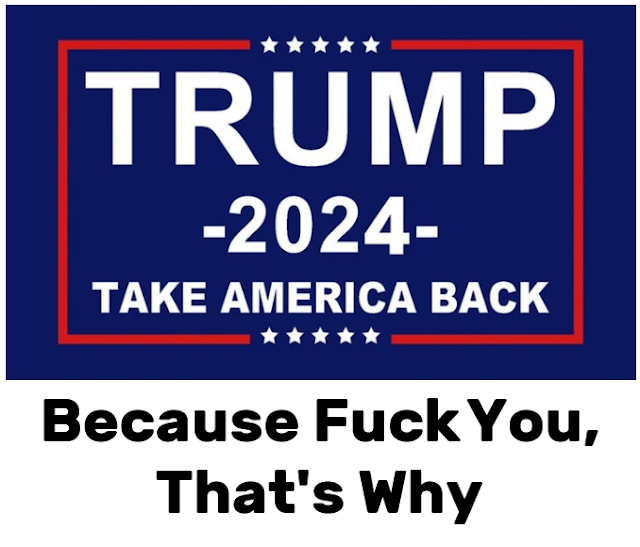 That might be good enough but again, voting for Trump still means participating in a corrupt and illegitimate system.
Basically I am at a place where I no longer see any value in participating in a system that is gamed against me and mine, giving at least tacit approval for what they are doing. My energy and focus is more valuable building my survival infrastructure and developing local connections. I don't begrudge anyone else voting and I am not telling you what you should do in the fall, but for me it no longer makes any sense to go through a ritual that I no longer believe in.
Posted by Arthur Sido at 10:02 AM