This Is Why I Don't Believe In Coincidences

In spite of the media studiously ignoring the issue, the chaos on the southern border is starting to get the attention of the sheeple. It really came to a head last week when it was revealed by Representative Kat Cammack that in the midst of a regional shortage of baby formula, illegal aliens seem to have plenty of it on our border:
Border detention center looks stocked with baby formula despite shortage
THAT got people wound up. Rightly so. The border is being completely overrun and this is by design. Just last week the Center for Immigration Studies pointed out that the administration isn't even pretending to control the border.
Mayorkas Testimony Reveals Biden Administration No Longer Trying to Deter Illegal Migrants
That’s a major shift in U.S. policy, and the reason why the border is in chaos
This should come as no surprise. The Left has been very open about replacing White people with new black and brown voters they believe will be easier to manipulate, if not control. A couple of choice quotes a friend on Facebook shared this morning.

“An unrelenting stream of immigration, nonstop, nonstop. Folks like me who were Caucasian, of European descent for the first time in 2017 will be in an absolute minority in the United States of America, absolute minority. Fewer than 50 percent of the people in America from then and on will be White European stock. That’s not a bad thing. That’s as a source of our strength.”

“The demographics of America are not on the side of the Republican party. The new voters in this country are moving away from them, away from Donald Trump, away from their party creed that they preach”

- Senator Dick Durbin, Senate Democratic Whip
Clearly this is the plan and Democrats (and a lot of Republicans) are celebrating it. Who isn't celebrating it? Regular White normies who were starting to figure this out.
Then like magic we see an 18 year old weirdo post a manifesto which speaks about The Great Replacement before shooting up a grocery store full of blacks. The shooter, Payton Gendron, seems perfectly normal. 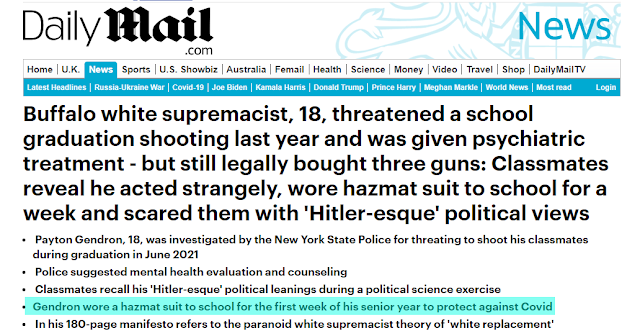 Pictures of him show what looks like a goofy, maladjusted White kid who seems to spend most of his time online and playing video games. He is clearly insane and was threatening shootings a long time ago. In other words the perfect patsy to wind-up and set loose to get people to stop thinking about The Great Replacement for fear of being branded a "White supremacist".
Like I said, I don't believe in coincidences.
Meanwhile it is almost 2 PM and still nothing from Biden other than a vague statement posted on the White House official website that I guarantee Sniffy didn't write or read. That hasn't stopped the usual suspects from calling for new gun control and screeching about "White supremacists". 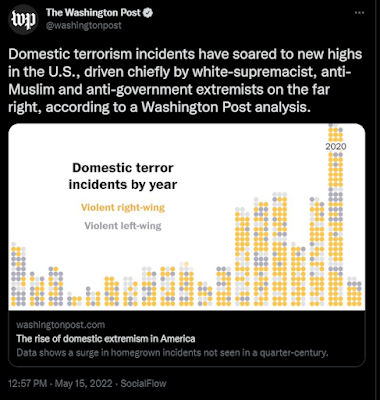 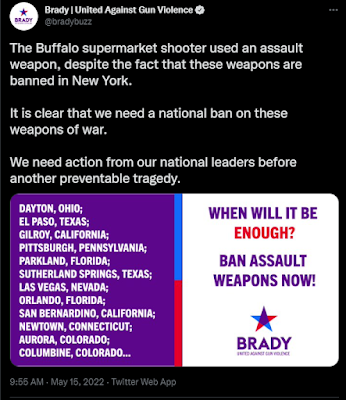 And in the "Every. Single. Time" category we have this guy flat out lying:

That isn't even true for the last week but Levine here knows his intended audience won't bother to think the issue through. Cripes the guy even puts his pronouns in his bio in Hebrew. Oy vey!

More updates as they appear but this one didn't seem to go as planned and is already kinda fading from the news. We will see what happens tomorrow.
Posted by Arthur Sido at 1:59 PM