Things That Are Weird

Isn't it weird that so many members of politically connected families somehow get fabulously wealthy despite having little to no talent? Hunter Biden is the obvious poster boy for this but here is another example:
Jenna Bush Hager Lists New York City Condo for $5.375 Million Jenna Bush Hager is one of the daughters of former President, current imbecile, George "The W Stands For War Criminal" Bush. She is a TV talking head and her husband, Henry Chase Hager, has held a bunch of B.S. bureaucratic jobs but now... "Her husband, 43, is a managing director at Waterous Energy Fund, a private-equity firm specializing in oil and gas investments" according to the WSJ article. I am sure they hired him for his expertise, not for his political connections through the Bush family via his father-in-law, a connection that is not mentioned at all in his bio at the Waterous website, just that he held positions in the W. admin.
Unlike most TV talking heads, the daughter of W. is butt ugly. 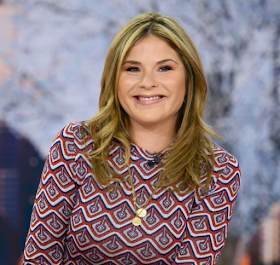 She somehow captures the very worst facial aspects of her dad in female form. How did someone that homely get hired to be on TV at NBC?
Cuz her daddy is a globalist elite.
Being a politician doesn't pay that well, the President makes $400 grand, the VP a little more than half of that. Being a Senator or Representative only pays around $174,000 which really isn't that much when you have to maintain a home back in your state/district and also a place to live in D.C., itself one of the most expensive places to live in the country. Oddly enough, many politicians are incredibly wealthy and they got that way after they got into office. How weird!
It doesn't take much research to see how incestuous the world of the elites really is. They know each other, work for each other, marry each other.  They make sweetheart deals for each other and provide access to the halls of power for each other. If you aren't one of them? Best of luck to ya. These people make connections early in life and then cash in on those connections throughout their career.
Another example. Even uglier-than-Jenna Bush is Chelsea Clinton who would be the poster child for ugly Presidential children if not for the Obama girls and Amy Carter. Chelsea met her future husband, Marc Mezvinsky, at a retreat for Democrat power families in 1993 when Chelsea would have been 13 and he was 16. Marc is the son of a couple of Jewish Democratic former members of Congress, Edward Mezvinsky and Marjorie Margolies. According to Wikipedia Marc Mezvinsky had the following "education":
Mezvinsky graduated from Stanford University in 2000, earning a BA in religious studies and philosophy. He then attended Pembroke College, Oxford, where he received his undergraduate MA in Politics, Philosophy and Economics.
OK so he has some academic background in economics but mostly he majored in bullshit. With that sort of "education" he is well suited to a career as a Starbucks barista but when your parents were in Congress and you are buddies with the Clinton's?
After graduation, he worked at Goldman Sachs as an emerging markets foreign exchange strategist, and later went on to join the global macro proprietary trading desk.
Well of course he did! By the time he was 32 he was living in a modest apartment....
Mezvinsky, 32, is an investment banker at a hedge fund and lives in a $3.8 million condominium in New York's Flat Iron district.
Lots of 32 year olds with a degree in religious studies and philosophy have multimillion dollar condos because of a career in high finance, even when their dad is a notorious crook who lost $10 million of his investor's money to West African conmen. Shrewd!
You can look at Wikipedia for any significant politician and you will find most of their kids have swanky jobs. Chuck Schumer has two daughters, one is an executive at Faceberg and one was chief of staff/general counsel at the Council of Economic Advisers. Nancy Pelosi has four kids, two who have written garbage books that were published because of who their mom is. Pelosi herself has at least 7 different homes and is worth tens of millions of dollars thanks to her husband's career which was no doubt helped along thanks to his wife's connections.
On and on it goes. Homely, talentless hacks and outright degenerates like Hunter Biden, Jenna Bush and Chelsea Clinton get great gigs paying tons of money thanks to their family connections and even if they don't go into politics themselves, you know their kids will have the same advantages. That doesn't mean they won't have struggles but as far as being able to get in doors that are closed to your kids, they are lightyears ahead.
For all of the flowery, egalitarian rhetoric about America being the land of opportunity, what we really have are two distinct systems. As a schlub, you or your kids absolutely can do quite nicely for yourself. You can even become rich. On the other hand, the path to economic ruin is a lot shorter than the road to wealth. Even the sort of wealth we can get is pretty fleeting. My dad was a doctor and that would have helped me with some limited local connections but not much. Getting me into Yale? Forget about it. A job at some hedge fund or venture capital outfit? No way. My dad had, and still has, plenty of money to live very comfortably and with enough to help us out a few times along the way but what he didn't have were the connections. What I have I had to earn and my kids are the same way. We help where we can but it is up to them. I can't pick up the phone and get them a job in Manhattan. Around here doing something for the Amish I sure can but nothing elite.
The other people, like Jenna, Hunter and Chelsea, are part of an unspoken aristocracy. Their parents can pick up a phone and get them a cushy six figure job, starting this afternoon if they want. They have the private phone numbers and email addresses of all of America's elites for the asking. If Chuck Schumer's granddaughter wants a job somewhere, she doesn't send her resume in via Indeed.com, her grandpa calls the company CEO who then calls HR and tells them to hire her.
The people who rule over you also make sure you can never challenge or threaten their lofty perch and that is a lot of what The Great Reset is all about. Remember peasant, it is an exclusive club, you ain't in it and never will be.
Arthur Sido at 1:44 PM
Share