The Stupid Does Indeed Burn

While the incessant screeching over "White supremacy!" lingers post-Buffalo, we continue to see over the top and silly reactions to the shooting. For example, this ridiculous story from Michigan:
Michigan high school students walk out to honor victims of Buffalo shooting
This made the news in Buffalo because "solidarity" or some other word these students can't spell or pronounce.
The demonstration was organized by the students, who belong to the black Student Union at East Lansing High School.
The students shared how the shooting affected them and their need to do something in their own community.
"It's just a hard thing to live with every day not knowing whether or not you're safe. You know even just walking down the street or jogging down the street like Ahmad Aubrey was or driving in your car like so many of us have or you know going to a grocery store and starting to feel not safe and it was hard thinking about how that could have been us ... my friends, my family ... it could have happened," says Kyrah Bey, a sophmore at the school.
Wow, that hits me right in the feelz. Especially the part where the staffer from WGRZ in Buffalo spelled "sophomore" wrong in the story.
What I imagine no one has told these students from the "black Student Union" at East Lansing High are the following facts:
1) The vast majority of homicides are intraracial. blacks kill blacks, Whites kill Whites, Asians kill pretty much nobody.
2) Therefore their fellow blacks are far more likely to kill them than some random White person and if they avoid committing a crime like Arbery, it really reduces their chances of being killed.
3) In fact, since 90% of interracial violent crime is black on White, I am statistically in far more danger of being the victim of a violent crime at the hands of a member of the black Student Union than any of them are at the hands of a White person.
In short, the members of the black Student Union are in virtually no danger from being killed by a White person but in significant danger of being the victim of a violent crime committed by a fellow black. I guarantee they don't realize this and/or don't care if it is true. Maybe they don't know, blacks in general are conditioned to be convinced that White peepo are out to get them....
Poll: Black Americans fear more racist attacks after Buffalo shooting
The story contained some interesting charts. 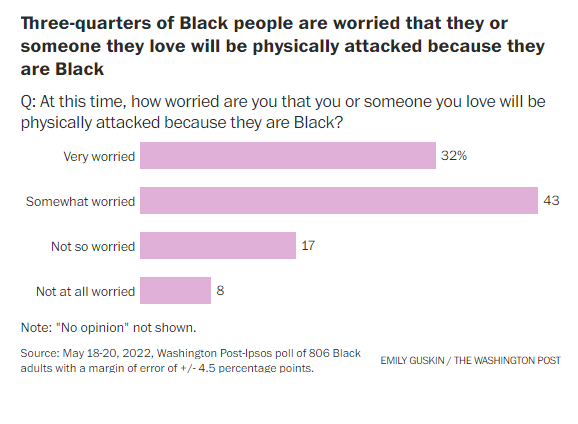 As noted, this has no basis in reality (see the note on interracial violence above) but it does reflect the black mindset that has them a'skeered of being run down by the high sheriff and his posse of white hood wearing accomplices. It doesn't help that they are endlessly told by the media, the entertainment world and politicians that White people are out looking for an excuse to kill them. In the real world we mostly just want to avoid any contact with them.
Here is a similar chart showing what blacks think of Whites thanks to the constant drumbeat of "White peepo be racist and sheeit" 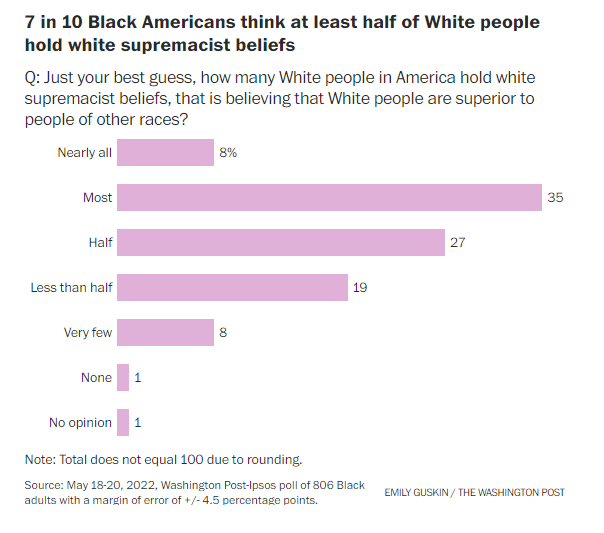 Very few White people have any "White supremacist" beliefs thanks to a lifetime of being told that all people are equal in ability. Most White people tiptoe around blacks to avoid upsetting them, as that often results in a violent overreaction, but blacks still seem to think we all have a pre-tied noose in the car just in case we run across some uppity Negro with a Subway sammich in need of a lynching.
This next chart should make the gun rights groups sad as they endlessly gush about how many new gun owners over the last couple of years were black which totally means they will vote for pro-2A politicians next election! 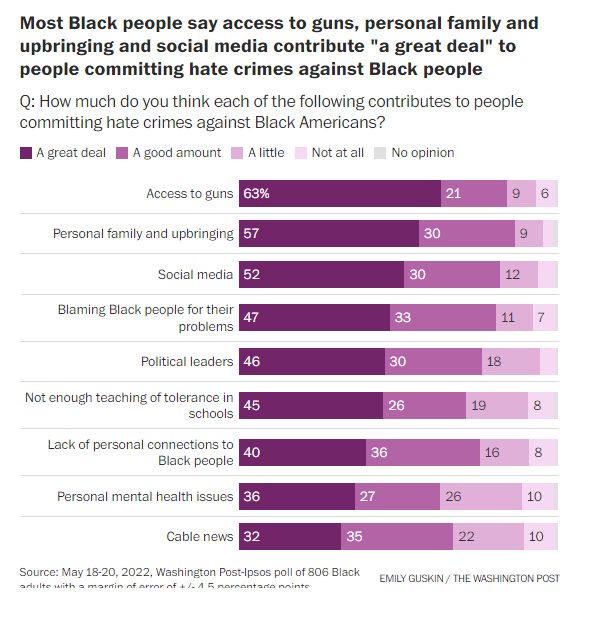 This chart shows what black think these imaginary "hate crimes" against them are caused by. Number one on the list with almost 85%? White people having access to guns. So if you still think that blacks will vote for pro-2A candidates, you are probably a Fudd or an idiot or both.
I especially liked the fourth one down. 80% of blacks think that blaming black people for the things that black people actually do causes "hate crimes". It is of course perfectly fine to blame White people for our problems, even "problems" that don't exist like widespread "White supremacy". As a bonus it is OK to blame White people for the problems of everyone else but if you suggest that blacks might bear some responsibility for their own actions? Why that is racism and leads inevitably to "hate crimes"!
That might actually be partially true. Much of what is called "racism" or "transphobia" or "antisemitism" in America is simply White people noticing the behavior patterns of other groups. We don't actually do anything about it which simply encourages their poor behavior but it still is morbidly hilarious that even blacks seem to understand that their shitty behavior causes White people to dislike them.
What is the point of an article like that? It is two-fold. First, it reinforces for the audience of the Washington Post that White people are terrible and black people are rightly terrified of us even though blacks at the same time feel completely safe in attacking Whites at random. The people who read the WaPo are not serious people but they do wield an awful lot of power in this country so as long as they stay convinced of something, it doesn't matter what the serfs in flyover country think.
Second, it also reinforces the fear of blacks that White people are out "hunting black people down everyday/every time they step outdoors" to paraphrase that great philosopher LeBron James, written most likely from his mansion in 84% White Brentwood, California. I am sure you can imagine why having black people fear and hate Whites is useful for "Them".
It is not only stupid but dangerous. While black people are in terror of "White supremacists", they are shooting each other (and random Whites and Asians) left and right. It would be like seeing a child standing next to a bush with a venomous serpent underneath it and telling the child to be careful because bushes are dangerous.
Speaking of stupid, I needed to mention this dumb twit. 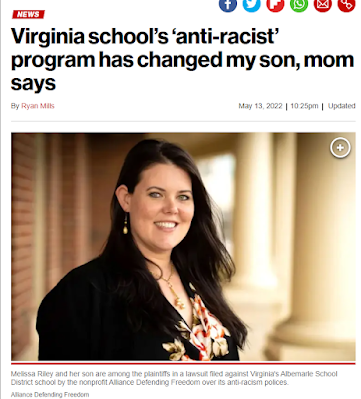 BoomerCons eat this shit up but they don't ever stop to think about the details. Here are the pertinent points.
The mother in question, one Melissa Riley, is mad that the Albemarle School District in Virginia is teaching an "anti-racism" curriculum. She claims that this has turned her once darling little baby into a petulant 13 year old.
She said the school has changed her son in ways she doesn’t approve of, filling his head with racial-awareness lessons that emphasize oppression and privilege. Her son now sees himself as different from his mostly white classmates: as a young black man who will have more struggles in life because of his race and because of the systemic racism that is endemic in American life.
“He is changing,” Riley said of her son. “If things don’t go his way or things seem unfair, he will now claim it’s racism. He never did that before. He now identifies as a black man, because that’s how the school told him he looks and who he is.”
A 13 year old that is disobedient, moody and claims that everything is unfair? Well that has never happened before. As someone who has gone through the growing pains of eight 13 year old children, I can assure you they are all very stable and not at all prone to drama and moodiness. A few critical clues from the article (emphasis in red mine)....
Growing up in the Charlottesville area, Riley said her son never really saw himself as different from the other kids in school. Sure, his skin tone was a little darker — his dad is black and Riley is white and Native American — but Riley never thought it was appropriate to box him in with stifling racial classifications.
...
Riley said her experiences with her son’s schools through the years have mostly been good. The academics in the local schools are strong, and Riley, a single mom, has sacrificed to make sure her son had access to the schools in the Crozet community.
A White single mom with a mixed race kid who is now angry and resentful. Her son's father is only mentioned once, to note he is black, and apparently plays no other part in his son's life. How many times have we seen this story of an abandoned White mom who is dealing with a mixed race child that is hard to handle? The point of the story is valid, anti-White propaganda dressed up as "anti-racism" material has no place in schools but this chick decided to put her life on hard mode by getting knocked up by a black guy who then predictably disappeared from the picture, leaving her to raise a mixed race kid by herself and apparently doing a bang-up job of it. It is purely selfish, these kids typically have identity issues on top of normal teenaged angst and hormonal problems because they simply don't belong. They don't look like their father's people and they especially don't look like their mother's family. I can see family features in my children but kids like this really can't.
The world is full of stupid people, but on the bright side if there is one thing we can look forward to as we descend into chaos it is that nature is about to rebalance herself and take a lot of the idiots out of the gene pool. Your job is to make sure you don't get swept up in the great winnowing to come.
Posted by Arthur Sido at 7:41 AM